What will occur if all people suddenly become vegetarians 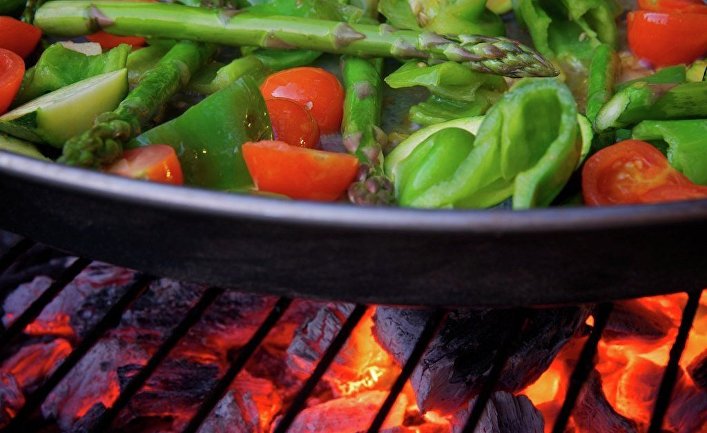 The refusal of meat will be useful both to our health, and to our planet, but at the same time can do much harm to millions of people, found out the observer of BBC Future.

People become vegetarians for various reasons. Someone does it because feels sorry for animals, and someone just adheres to a healthy lifestyle. There are also those who support decrease in emissions of greenhouse gases.

As if opponents of vegetarians tried to deny it, the refusal of meat has a set of advantages. And the more people will exclude it from the diet, the we will be able to observe bigger positive effect on a global scale.

But if all become the convinced vegetarians, millions if not billions, people face serious negative consequences.

“This scenario has both pluses, and minuses” — Andrew Jarvis from the International center of tropical agricultural industry, Colombia says.

“In developed countries transition to vegetarianism will allow to improve ecology and health of citizens. But in developing countries it will lead only to poverty deepening”.

Together with other experts of the center Jarvis tried to simulate a situation which would develop on the planet if all people sharply ceased to eat meat.

First of all they paid attention to climate change. Falls to the share of food production from a quarter to a third of all anthropogenic emissions of greenhouse gases, and their most part results from activities of an industry of livestock production. Despite it, we often underestimate influence of our food preferences on the environment.

For example, to the USA in case of production of meat in the quantity sufficient for an average family of four people, more greenhouse gases are thrown out, than when using by members of this family of two cars.

However, discussing questions of global warming, we constantly speak about cars, but not about stakes.

“Most of people doesn’t think of communication between food and climate change — Tim Benton, the food security expert from University of Leeds says. — But if we begin to eat slightly less meat already today, our children and grandsons will tell us thanks”.

Marko Springman, the research associate of the research center Oxford Martin School in case of the Oxford university, works on the Future of Food program now.

He decided to find out what real benefits it can bring. Together with colleagues he created the computer models allowing to foretell what happens if by 2050 all mankind completely refuses meat.

Results of a research showed that I will eat around the emissions connected with activities of the food industry will decrease approximately by 60%, generally thanks to refusal of red meat.

And if all inhabitants of Earth become vegans (that is complete vegetarians? — The edition), amount of emissions will be reduced approximately by 70%.

“We tried to learn how it is possible to slow down rates of climate change, and found out that to reach a steady ratio of amounts of emissions from the food industry and all other emissions it is possible only if all population of Earth eats only vegetable food” — Springman says.

“It is unlikely it is possible, but this conclusion once again demonstrates that the emissions of greenhouse gases resulting from activities of the food industry will exert serious impact on the future of the planet” — he specifies.

For production of food and in particular for needs of livestock production extensive agricultural holdings are required, and transfer of lands to other category and loss of a biodiversity lead to increase in amounts of emissions of greenhouse gases.

Around the world there are about 5 billion hectares of agricultural holdings, and 68% from them are used as a pasture for the cattle.

If all of us become vegetarians, then at least 80% of these pastures will be again turned into meadows and the woods which will catch carbon and will help us to suspend climate change.

Return of pastures to natural state will also favorably affect a biodiversity. To the habitat will return large herbivorous like the buffalo s who are forced out by the person for the sake of cultivation of the cattle and also wolves who are often killed because of attacks on pets.

The remained 10-20% of the former pastures can be used for cultivation of grain crops which will help to fill a lack of food.

This rather small increment of agricultural holdings will be more than enough to compensate lack of meat, on a third of arable lands grow up the forage crops which aren’t intended for the person.

Recovery of the environment and transition to production of exclusively vegetable food will demand careful planning and essential investments as the majority of these lands already became useless.

“It is impossible just to move away cows from the earth and to wait that on it in itself the virgin forest will grow” — Jarvis notes.

The people working in the field of animal industry need the help with employment.

They will be able to go in for agricultural industry, recovery of forests or production of environmentally friendly energy from waste of vegetable raw materials which use as a forage for the cattle now.

Besides, farmers will be able to gain income, growing up the cattle for the ecological purposes.

“The hilly terrain which the person, to be exact — the herds of sheep which are grazed here very strongly affected is characteristic of Scotland — Peter Alexander, the specialist in social-and-ecological systems from University of Edinburgh says. — Disappearance of sheep will lead to change of the environment and, perhaps, will negatively affect a biodiversity”.

If we aren’t able to offer new options of employment and a subsidy to those who were engaged in animal industry earlier, then we will probably face growth of unemployment and a turmoil, especially in the rural zone which is closely connected with this industry.

“Now on Earth there are more than 3,5 billion domestic ruminants, and we annually eat meat of tens of billions of hens” — Ben Falan from the Cambridge university studying balance between the product demand of food and a biodiversity says.

“It means that the serious blow will be struck to economy” — he emphasizes.

But even the best plan won’t be able to provide creation of alternative sources of the income for all.

About a third of lands on the planet represent the droughty and semi-droughty pastures not suitable for cultivation of crops.

In attempt to turn some sites of Sahel, the African region located to the South from the Sahara and to the North from the equator from pastures for the cattle to arable lands it wasn’t succeeded to achieve anything, except desertification and loss of fertility.

“Without the cattle life for the people living in a certain environment will be impossible” — Falan says.

It especially concerns the Mongolian and Berber nomads who due to the lack of the cattle should settle forever in the cities that will lead to loss of their cultural identity.

Besides, also those for whom meat isn’t a livelihood can suffer. Meat — an important part of history, traditions and culture.

At many people it is accepted to grant the cattle at weddings worldwide, and some people can’t just provide a festive dinner without turkey or roast beef.

Meat dishes became manifestation of cultural identity of certain regions and the people.

“The complete refusal of meat will exert huge impact on culture and for this reason measures for decrease in level of consumption of meat most often are inefficient” — Falan says. Consequences of vegetarian food for health are ambiguous too.

According to computer model of Springman if by 2050 all inhabitants of Earth become vegetarians, the global level of death rate will decrease by 6-10%, thanks to reduction of number of diseases of cardiovascular system, diabetes, heart attacks and some types of cancer.

Equally will affect it as refusal of red meat and the related decrease in caloric content of a diet, and consumption of bigger amount of fruit and vegetables.

If all population of the planet passes to veganism, the positive effect will only amplify: the vegetarian diet is capable to save 7 million lives a year while vegansky — about 8 million.

Decrease in number of the chronic diseases caused by improper feeding will also lead to decrease in expenditure for medical services that will allow to save about 2-3% of global GDP.

But that all this became a reality, it is necessary not just to refuse meat, but also to replace it with products with equivalent nutritional value.

Animal products contain more nutrients per one calorie, than in vegetarian. Therefore it is very important to pick up the correct food allowance, especially for more than two billion people suffering from malnutrition.

“Transition to vegetarianism on a global scale can lead to sharp deterioration in human health in developing countries, they will receive less the vital nutrients” — Benton says.

In everything the measure is necessary

Fortunately fully to take an advantage and to minimize negative consequences, it isn’t obligatory to attach to vegetarianism the whole world. The most important — it is meat more rare and smaller portions.
According to results of one research to reduce the level of emissions of greenhouse gases in Great Britain by 17%, it is enough to population of this country to adhere to WHO recommendations concerning food.

And if to refuse animal products and harmful “having a snack”, this indicator will decrease by 40%.

“Such changes in a diet won’t be painful for people. Everything that is necessary — simply to eat slightly less meat — Jarvis says. — About complete transition to vegetarianism here the speech doesn’t go”.

According to Springman, thanks to certain changes in food system we will choose useful food which production doesn’t do such harm to the environment.

For example, it is possible to raise the meat price, at the same time having made fresh fruit and vegetables is cheaper and more available.

Besides, we should treat more responsibly the food consumed by us, only 50% of the made calories are effectively used for today. The cause is losses of food, food wastes and overeating.

“There are systems with low production allowing to provide good conditions of keeping of animals and to minimize influence on ecology, but at the same time making high profit” — Benton says.

“Farmers can gain the same income, making meat as a delicacy, but not as a product for the daily use. Other methods of cultivation of animals are for this purpose applied absolutely” — he explains.

Actually clear measures for emission reduction of greenhouse gases in livestock production already exist. There isn’t enough only desire to put them into practice.