When the brain generates sweet and colorful sounds 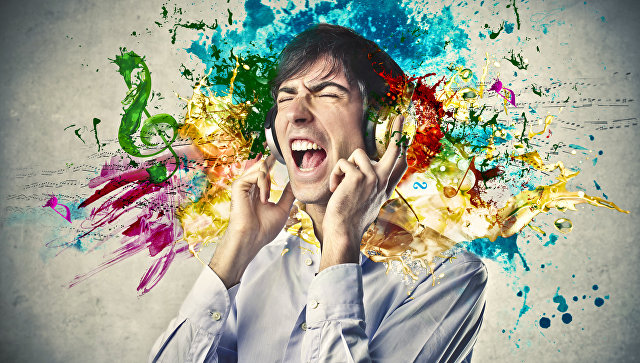 Recognition that speech and music are perceived as multi-colored, have long been considered fantasies or enduring memories of childhood. The newest methods have shown: the brain is really capable of simultaneously including two or more departments responsible for different physical senses. This condition is called synaesthesia.

The letter “A” glows red, the name “Maria” tastes sweet, and the sound of the saxophone is like a scattering of colored balls: when synaesthesia, eyes, hearing, and taste are involved immediately. For example, for some musicians, the sounding notes have different sizes and brightness.

Among the synesthetes there are many creative personalities. The artist Vasily Kandinsky, writer Vladimir Nabokov were synesthetists. It is assumed that Marc Chagall – too, because in many pictures depicted people with green and blue faces (personal synaesthesia).

There are many examples of synaesthesia in the scientific literature, but it is not known how widespread it is. According to some estimates, four percent of the human population is synesthetics, and among artists – 23 percent. Some researchers believe that every two hundredth – a synesthet, others – every two thousandth.

A total of six dozen types of synaesthesia are described. Prevailing grapheme-color, when a person perceives letters or numbers in color. A lot of synesthetics see colored days of the week and music. 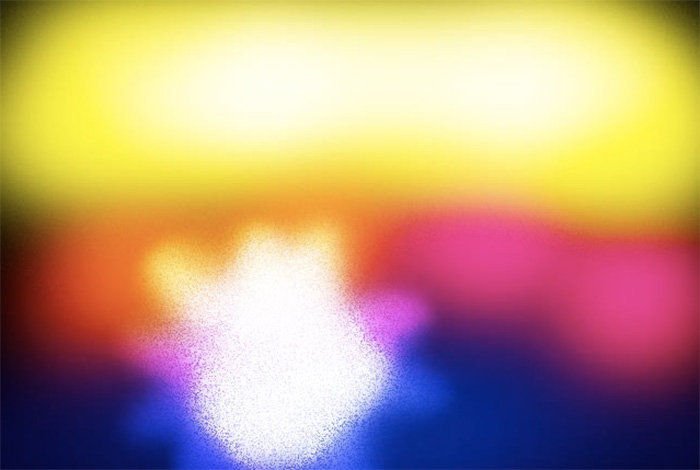 Musical-color synaesthesia in the artist’s view: from below up various colors are painted the sounds of various percussion instruments

Synesthetics do not seek to talk about their perception of the world around them – they just think that it’s like that for everyone, and they are very surprised to learn about their uniqueness. Often this happens in adolescence or even in adulthood.

Congenital synaesthesia accompanies a person all his life. It is impossible to control it – you can not turn off the work of one of the physical senses or extinguish it. Synesthesia starts automatically when the stimulus appears. For example, all oval objects are involuntarily perceived as crimson.

Scientists note that in two percent of people, synesthesia starts puberty. The perception of the stimulus is accompanied by colored forms, taste, smell, sounds, tactile sensations, is associated with the highest degree of trance, the boundaries of reality are lost.

Synaesthesia, including a rare form, when emotional perception is connected, is acquired – as a result of neurological diseases, injuries. For example, patients with hemorrhage to the thalamus may experience sensations outside the body, a strong disgust when reading words printed in blue letters. The blind, who use sound devices that replace the organs of perception, sometimes also develops synaesthesia. Some perceive objects as certain sounds.

Among people with autism spectrum disorder, synaesthetics often experience tactile sensations without real physical contact. For example, a child at the sounds of a copper pipe sees before his eyes brightly colored triangles and feels the touch of his hand. This does not allow him to sit still. Having looked at something, the autist can feel a touch or, on the contrary, a skin to feel on itself someone’s sight or music. A state where a person senses sounds rather than hears them is called “sound sense”. 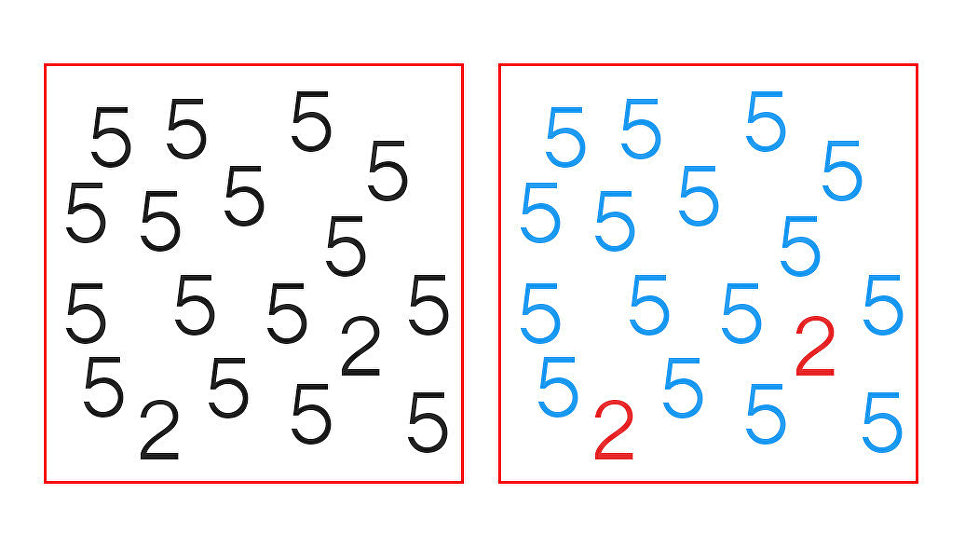 A test to identify grapheme-color synesthetics. To find the deuce among the fives, the average person should analyze the shape of the numbers (left). The synesthetic immediately snatches the red numbers (right).

The phenomenon of synaesthesia is known for more than a hundred years, but only in the last two decades has its study gained a full scientific basis, thanks to the ability to record the activity of various parts of the brain with the help of functional MRI. With synaesthesia, stimulation of one feeling causes an involuntary reaction of another or several. This is what tomograms show. For example, in graphene-color synesthetics, two parts of the cerebral cortex are involved: those responsible for verbal perception and color. Active regions are clearly related to each other, but the molecular nature of this relationship is unknown.

Scientists believe that synaesthesia is one of the forms of hyperviscosity of the brain, when several departments interact at once. This is observed with some diseases, the same autism. Recently it was revealed in people with an absolute musical ear.

What makes the brain work with overload is also unclear. According to one version, we are all born synesthetics, but as the brain develops, the connections between its departments responsible for physical perception are torn. For some people, they are for unknown reasons, for example, between the auditory and visual cortex.

Scientists can not yet say whether the synesthesia is determined genetically, but some data indicate this. Recently, European experts have analyzed the genomes of three families that perceive music in color. It was established that the inheritance of this quality corresponds to variations of 37 genes, with six of them participating in the formation of axons – nerve cell processes. This occurs in the brain in early childhood, just then the synthetic perception is manifested.

Creative people draw inspiration from synaesthesia. If scientists disclose its genetic and molecular nature, perhaps this state will partially lose its mystery in the eyes of artists and musicians, but mankind will have a chance to better understand some neurological diseases, to help people with autism spectrum disorder.