Where does sand come from in deserts? 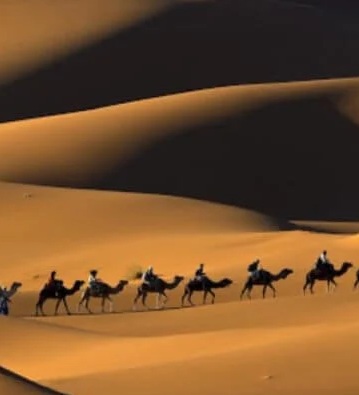 It is customary to call deserts the flat areas of the planet Earth, on which it practically does not rain. Due to the lack of water, there are almost no plants and animals in the deserts. The only exceptions are all kinds of cacti, rodents and snakes.

According to scientists, at the moment there are 51 deserts on our planet, and we are talking not only about sandy areas, but also the devastated territories of Antarctica. With regard to Antarctica, everything is clear. It is located on the coldest part of the Earth and is mostly composed of frozen water. But have you ever thought about where the sand came from in the deserts of the rest of our planet? It might seem that the answer to this question is very simple. But sometimes even scientists cannot answer it the first time. What is the difficulty?

When we hear the word “desert”, we imagine the undulating dunes of the Sahara, along which camel caravans walk. This is how the creators of various films show us the deserts. However, in fact, the desert regions of our planet are also covered with clay and exposed rocks. Probably, they do not look as spectacular as undulating dunes, which is why authors of feature films and documentaries do not like to show deserts as they are. Under a thin layer of sand lies almost the same earth as in other parts of the planet. The surface of sandy deserts is perhaps too hot and unsuitable for plant growth. But there is still sand in the deserts, so the question is open – where did it come from?

To begin with, it is worth understanding why deserts are formed on our planet at all. Typically, deserts are surrounded by high mountains that prevent rain clouds from freely passing over them. Due to huge obstacles, it rarely rains down to deserts, which explains the low rainfall. In addition, deserts are located in the hottest corners of our planet. Hot winds blow in them, which over millions of years provoke the formation of sand even more. Sometimes there are no unnecessarily high mountains near deserts, and in this case, deserts are formed due to unique weather conditions. For example, in some areas of our planet, there is always high pressure, which prevents the formation of clouds. It is believed that it is for this reason that the Sahara Desert appeared.

Where does the sand come from?

Sand in deserts is basically tiny pebbles. Sand particles are usually composed of pure quartz, the most abundant mineral on our planet. It just so happened that during the day the surface of the deserts can heat up to +80 degrees Celsius, and cool down sharply at night. Due to the sudden changes in temperature, rocks quickly disintegrate into tiny particles. Scientists believe that it is they who form the huge dunes. Under the influence of hot winds, the sandy surface of deserts is constantly in motion. Because of this, plant roots cannot develop freely, as a result of which a desert landscape is formed.

In general, deserts can be divided into three types:

ergi are sandy deserts where dunes are most often formed. One could say that the Sahara Desert is the most exemplary erg. But it consists of egos only in part, because there are other types of localities on its territory;
hamads – rocky deserts. Such regions can also be found in the Sahara;
serirs and regis are an intermediate type of desert between rocky and sandy species. Their surface is very flat and such regions are also found in the famous Sahara Desert.

In the end, it turns out that there is not so much sand in the deserts. Researchers believe that 80% of our planet’s deserts are largely free of sand. In most cases, the surface of deserts is cracked clay and bedrock. And under the huge accumulations of sands that seem endless, there is an ordinary, solid earth surface.