Where from in Antarctica waterfall 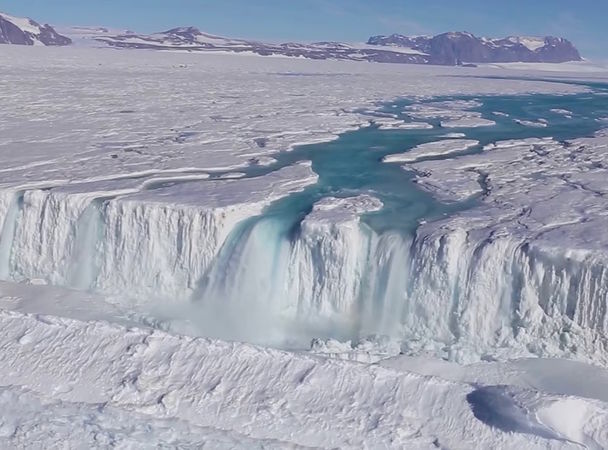 How can rivers and waterfalls exist on an eternally cold continent? Why do not they freeze? It seems that the question should be put on the opposite: why Antarctica has not melted so far?

It seems that Antarctica is an endless snow-covered desert, but here there is water in a liquid state. Find it can be deep under the ice shield (Lake Vostok) and even on its surface.

In December, when the sun begins to heat in summer, the water from the melting glaciers flows into the lowlands. It feeds, for example, the largest continent river – Onyx. Its 30-kilometer channel passes along stony valleys and is filled with water only for a couple of months, from December to February.

In addition to Onyx, in the summer across Antarctica there are many other streams and rivers that flow into ponds or fall into waterfalls from cliffs. By 2017, scientists discovered on the glacier Nansen about 700 previously unreported water bodies, including huge dams up to 80 km long and a huge waterfall of 130 meters wide.

According to the findings of scientists, the streams of meltwater can overcome up to 120 km along the icy wilderness. This is affected by the features of the relief: the center of the continent is somewhat higher than its coast. This facilitates the movement of water and ice from the heart of Antarctica to the north, to the ocean.

It would seem: all these reservoirs should accelerate the melting of Antarctica. However, analyzing images from aircraft (from modern to archival, up to 1947) and satellites (until 1973), scientists noticed that some of the reservoirs are regularly formed from year to year. Hence – the hypothesis: a network of rivers ensures the outflow of water into the ocean and plays the role of a drainage system, not allowing thawed water to accumulate in one place and destroy the glacier. However, global warming can accelerate the rate of thawing and disrupt the balance of this natural system. The world is already familiar with how climate change increases the rate of ice melting. An example is the Larsen Ice Shelf, which lost tens of thousands of square kilometers of ice in just half a century.