Where time goes faster, when it ends and who lives in the past

We do not value him, very often neglect him, sometimes we kill him. It is constantly lacking, it flies so fast that you want to stop it, and sometimes it even heals wounds. Time is a physical quantity, it is constantly changing, and this is not a figure of speech: its flow accelerates, slows down, stops and continues. And in a minute it’s not always 60 seconds, time has a beginning and an end, but first things first.

Time was launched about 13.8 billion years ago. At least theoretical physicists, including Albert Einstein, believed that time had its origin at the time of the Big Bang. Stephen Hawking in his lectures on the origin of time said that before the Big Bang all the matter of the universe was compressed, and its density tended to infinity. This incredibly dense point is called a singularity, to which there was nothing at all.

However, in 2018, the scientific article “Through the Big Bang” was published, in which the team of authors argued that there was time before the Big Bang. If you explain a clever theory with a large number of formulas and equations on the fingers, then imagine that the universe is your sock, and rewinding is the process of twisting it. So, the Big Bang is the moment when the sock is in a state of lump, singularity. Check it out one way, get the front side: our flow of time and the modern universe, and if we turn it inside out, we get the universe that was before the Big Bang.

By the way, the Big Bang and the launch of all processes of the formation of the universe are shared by the so-called Planck time – the quantum of time, the smallest value. It is equal to the time during which a wave or particle, without mass, moving at the speed of light, will overcome the Planck length (approximately 1.6 × 10−35 meters). Planck time determines the extent to which modern physical theories cease to work, and the General Theory of Relativity generally loses its meaning. And all because of 5.39×10−44 seconds.

In classical physics, time is considered absolute. All processes in the world, regardless of their complexity, have no effect on the passage of time. Newton argued that all movements can be accelerated or decelerated, while the course of absolute time cannot change. On the one hand, this is so. But the theory of relativity claims that the passage of time depends on the speed of movement. In other words, in an hour by metro you will age less than sitting at home in an armchair.

Another fun fact, confirming that time is plastic, was confirmed by practical physicists. The source of gravity affects this fundamental quantity: deep underground, the passage of time passes more slowly than at the top of the mountain. Einstein spoke about this effect of gravitational deceleration in 1907, however, his theory was confirmed only with the advent of ultra-precise equipment. You will never feel this, but a person living on the 17th floor is aging faster than his neighbors below. And this is not a joke: corrections for the curvature of time are always introduced into the work of near-Earth equipment.

Today, the most accurate atomic clocks are at the University of Colorado. They define one second as 9 192 631 770 periods of electromagnetic radiation arising from the transition between two ultrathin levels of the ground state of the cesium-133 atom. The clock is so accurate that it lags just one second in five billion years. And they are able to capture the effect of gravitational deceleration when changing the height by several tens of centimeters. 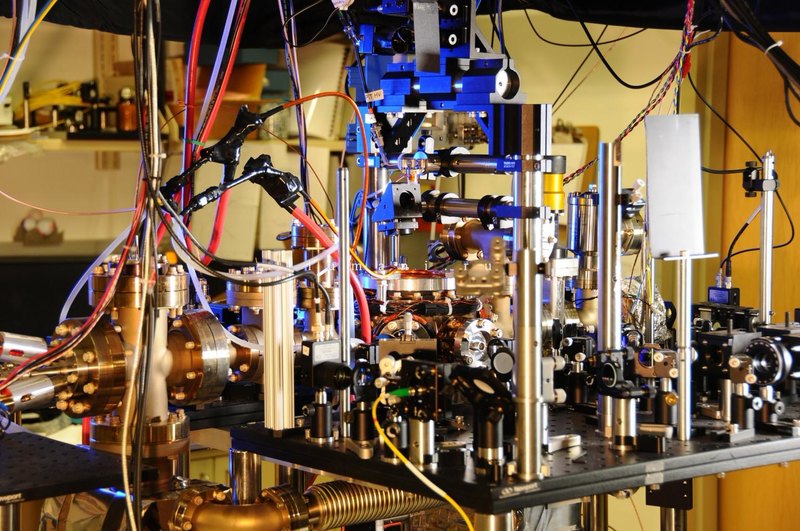 Atomic clock at the University of Colorado, USA

Another change in the current time is associated with gravity. As the moon rotates, it acts on the Earth, slowing it down. In the distant past, the rotation of our planet was so fast that the day lasted no more than 2-3 hours, and the Moon managed to fly around the Earth in just five hours. The process of deceleration continues to this day: over a hundred years a day add 0.002 seconds. Theoretically, the moment will come when time on our planet will stop, but our descendants will not find this, because the expanding Sun will absorb the Earth much faster.

By the way, if you think that there are always exactly 60 seconds in a minute, then we hasten to disappoint you. There is a so-called second of coordination, it is also called a “jumping” and “leap” second. It is periodically added either at the end of June 30 or December 31 to the Coordinated Universal Time (UTC) to coordinate it with the average solar (UT1). This is done so that the UTC time does not differ from UT1 by more than ± 0.9 seconds. It is believed that on such days after the time 23:59:59 is 23:59:60. Due to the increase in the length of the day due to the weakening effect of the gravity of the Moon on the Earth, in the future additional seconds will need to be introduced more and more often, in each next century it will be necessary to enter approximately 64 seconds more than in the previous one. So, in the 22nd century it will be necessary to introduce two seconds a year already, and after 2000 years, the same thing should be done about once a month. After 200,000,000 years, the day will last 25 hours.

And finally, another interesting fact. Everyone knows the statement that it is impossible to catch up with the future, it will always be one step ahead of you, it’s unrealistic to jump above your head. But you have to come to terms with the fact that at this moment, second of the current moment of time, you are in the past. This is because our brain processes events late. Neuroscientist David Eagleman found that delaying the synchronization of our brain with reality takes 80 milliseconds. And in extreme situations and under stress, time for our brain slows down: it captures many times more information than in a calm state. This is a kind of slow motion mode like the camera of your smartphone, in which video is recorded at twice the frame rate.