Whether vegetables on Mars will help to grow up human excrements? 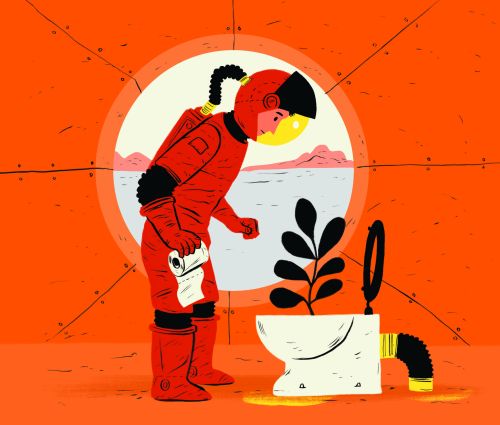 Mark Watney, the main character of the science-fiction novel “Martian”, throughout the very long-lived period survived on Mars, having turned the site of the soil into the improvised bed by means of excrements and a large amount of water. But whether the similar idea is completely fantastic, or in it there is a grain of common sense?

If people sometime after all are able to found colony on Mars, then receiving is fresher than the food capable to cover all requirements of a human body, will be the main problem. Bruce Bagbi, professor of University of the State of Utah who helps NASA to develop life support systems of astronauts, claims that colonists should grow up this food on the Red planet.

Except water and light (which in space are not such infrequent resources), plants also need a large amount of nitrogen. Human excrement just to contain a large amount of nitrogen which is removed from an organism in the form of urea, and also bacteria which split it on the nitrates necessary for body height of plants. At the same time, together with the useful bacteria the internal microflora of crew members may contain also harmful which can breed thus and when plants turn into food, to infect also other astronauts. For this reason simply to dump excrements on beds it is impossible.

To avoid it, Bagbi suggests to punch excrements within several months that will allow to eliminate the “poor” microbes. Unfortunately, even in this case the Martian soil poorly approaches to become the field for cultivation of a harvest: the dry, stony soil contains a large amount of perchlorates and persulphates, poisonous for the person even in small concentration. Besides, because of the high temperature drops and frequent sandstorms closing a palate, the task becomes complicated in tens of times. However, scientists I continue to develop all possible hypothetical theories of “the Martian beds” in hope that sometime the Red planet nevertheless will become manned.