Whether will endure terrestrial religions a meeting with newcomers 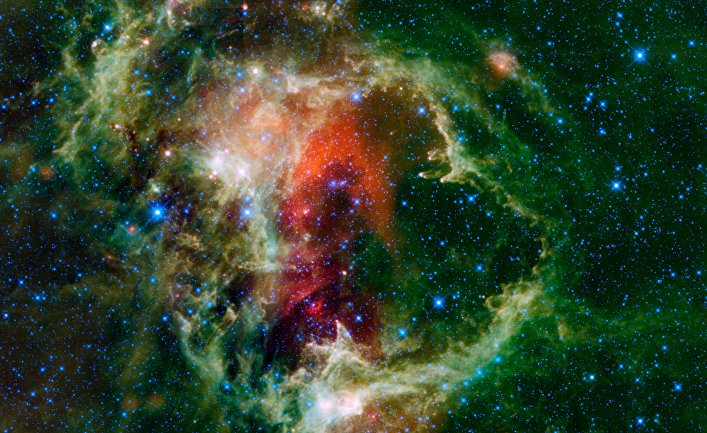 For religious people information that life on Earth isn’t unique can change idea of ourselves radically. People are how special and sacred? Whether our world is so exclusive? Whether we are obliged to be interested in life on other planets? Whether have to ми try to turn extraterrestrial mind into the religious beliefs? Existence of these questions speaks about deeper nature of disputes on whether our religions will be able to reconcile to presence of others capable to worship god of reasonable beings in the Universe.

Some faiths could reveal new meanings of ancient texts and find ways of introduction of ideas of extraterrestrial life in the outlooks. Other religions, less flexible in the interpretation of the Scripture or claiming what besides homo sapienses of beings in the Universe isn’t present, most likely would meet difficulties with adaptation.

Believers we or not, nobody completely can avoid influence of religion on our culture. The religion is one of the oldest elements of our public structure and one of ways — and, perhaps, and the first contact will happen the main thing — that, how exactly. Here the short review of how some religions concern to aliens whether they will try to turn them into the belief and what of religions most likely will escape as a result of potential opening of existence of extraterrestrial life.

There are several reasons to believe that the Judaism will endure the first contact. Jews believe in lack of restrictions of the divine power and therefore are open for the idea that god quite could create more than one type of the beings allocated with reason in space. The rabbi Norman Lamm has declared recently that “not uniqueness of the person doesn’t mean his negligibility” and for this reason the Judaism so quietly accepts the scientific conclusion that people are not the only reasonable and God’s bio-spiritual inhabitants of the world. From the theological point of view of Lamm though people can not be the center of the divine Universe, their existence is caused by a certain purpose.

Jews would also not be puzzled with a question of the address of representatives of alien civilizations to the belief. The Jewish philosopher of the 12th century Maymonid held the opinion that righteous persons of all nationalities and religions will be able to receive the place in heaven. Considering told, Jews would begin to recognize that newcomers will be able to decide how to worship god and whether to do it in general.

Seventh-day Adventist Church appeared in the 19th century, partly for the purpose of permission of the theological problems connected with a possibility of existence of extraterrestrial life. One of founders of this direction, Ellen White, described been to her in visions of extraterrestrial beings from various worlds as “high performed greatness of people” and besides absolutely innocent. These visions help to understand fundamental belief of Adventists that newcomers don’t need Christian atonement as don’t suffer from consequences of an original sin.

The serious problem will arise if the extraterrestrial mind will be the evil. Prophecies Whyte will begin to be considered as false, and Seventh-day Adventist Church should or find a method to adapt, or to sink Into oblivion.

Most of Christian fundamentalists adhere to the principle of literal interpretation of the Scripture. As aliens aren’t mentioned in the Bible, they consider it the proof of lack of existence of similar beings in the Universe. Therefore the first contact with newcomers, obviously, would generate serious difficulties for creationists.

Creationists deny the theory of evolution, and opening of simple or reasonable life forms on other planets will hardly force them to review its solvency. Perhaps, they also accepted the idea that the Almighty God created more than one reasonable type in the Universe without the aid of evolution and just decided not to report to us about this aspect of the plan. But this point of view takes place to be only in the conditions of not literal interpretation of the bible.

If representatives of extraterrestrial civilizations arrive to Earth, will begin to deny their existence impracticablly. For maintenance of viability of creationism, it is necessary to his followers will agree with views of other faiths of various bible questions.

Many spiritual leaders of Catholic church take a possibility of existence of aliens seriously and agree in opinion that representatives of extraterrestrial mind are guilty, despite disagreements in why it and whether they shall visit Catholic services in case of arrival to Earth.

In the first half of the 20th century the priest Jesuit Pierre Teilhard de Chardin assumed that the original sin arose not because of mistakes of two people on Earth, and stands out through all Universe. He also assumed that Christ on Earth has no expiatory value for other beings in space and therefore the advantage of acceptance of Christianity to aliens on Earth won’t be. But Teilhard also considered that Christ could be realized in other worlds in certain inherent in those places and beings of a form. These embodiments of the savior could create the systems of religion like Christianity giving to the alien population opportunities for atonement and salvation there.

Teyar’s works weren’t widely adopted and were forbidden since 1962. For comparison, the ideas of the professional astronomer and the Jesuit brother Guy Consolmagno who works in observatory of Vatican reflect present Catholic views of extraterrestrial mind better. Consolmagno considers that detection of his representatives won’t create Catholic church of any problems. He claims that there is only one Christ — the fact that lived and died and it was revived on Earth 2000 years ago. If other living beings in the Universe suffer consequences of an original sin, they will only benefit from stay and Christ’s revival on Earth. This theological approach turns Catholicism into universal religion, and does Earth by the main place in the Universe.

If Konsolmanyo’s views keep the popularity, spiritual leaders of Catholic church, perhaps, will be forced in case of the first opportunity to turn representatives of other civilizations into the belief. It can also entail department from church of representatives of concordants with Teyar of minorities.

Similar events could take place in the future in attempts of one or several religions of the world to turn newcomers into the belief.

News about existence of representatives of the extraterrestrial civilizations especially reasonable, most likely, won’t surprise adherents of Muslim belief. The Scripture, in fact, provides proofs for benefit of existence of reasonable life forms on other planets in Islam. The Koran says that all beings serve in the Universe to Allah who “knows their number and counted them. Each of them will be to It in Day of revival alone”. Some scientists agree in opinion that these beings aren’t angels because the word “da’bbah” in translation means a living breathable being that goes on the ground; it doesn’t fly and spirit isn’t.

Many Muslims believe that Islam forbids the address to other belief. And others consider that the certificate of belief saying “isn’t present god, except Allah, and Muhammad — his prophet”, implies the threat to belief proceeding from not Muslims and need of the address of the last to Islam. Proceeding from it, it is possible to expect that many Muslims would like to turn representatives of extraterrestrial mind into the belief.

Buddhists consider the Universe as something unimaginably big, ancient and everywhere inhabited by living beings. Thanks to reincarnation of a shower can infinitely move on a set of levels in this Universe. At the time of death, reinkarniruyushchy soul leaves a body in one part of the Universe and regenerates in other body in other part of the Universe. Existence of extraterrestrial mind is pledged in Buddhist outlook initially and therefore alien presence won’t create threat to its basic principles.

There is a variety of reasons on which Buddhists wouldn’t begin actively to aim to turn representatives of extraterrestrial civilizations into the belief.

Doctrines of the Buddhism provide not just blind following to any person or the idea. The Buddhist can’t ask others to practise the religion without rational understanding these people of the principles of the Buddhism. Besides, most of Buddhists recognize that their way — not unique to an enlightenment.

May we learn any lessons from thorough examination of the religious doctrine about what can happen to religion in case of the first contact? Yes. The old saying “divinity that marries science today, will become a widow/widower tomorrow”, most likely, is true. The majority of the main religions which are containing references of extraterrestrial mind or showed flexibility for adaptation to new knowledge, most likely, will survive, and more stubborn religions should solve more major problems. As it was already noted, especially serious problems expect church of Seventh-day Adventist Church, creationism and Catholicism.

If to be guided by history, transition won’t be painless. There are many examples from the past when our spiritual leaders were forced to fight against large discoveries. Four centuries ago, when Copernicus, Kepler and Galilei proved that Earth isn’t the center of the Universe, Catholicism and almost all arising Protestant faiths condemned this idea. Today practically all accept the point of view of Copernicus, and in the 17th century preserving religious tradition caused unprecedented damage. Religious institutes managed to survive, despite all shocks, human losses and the split which generated new religions. Similar quite could occur and today.

The history also showed us that many religions don’t hesitate to offer non-believers and at times and to force them, to join the ranks. Efforts of the European colonists and Islamic armies on the address of indigenous people to Christianity and Islam have the oppressing, bloody history. Similar events could take place in the future in attempts of one or several religions of the world to turn aliens into the belief.

Besides, the greatest religious consequences of the first contact could help us to find new understanding themselves. Perhaps, the meeting face to face with the fact that we aren’t unique, and our planet — not the unique haven of live organisms, will help us to refuse belief that we are higher than others and that importance of human life in the opinion of God won’t decrease if representatives of extraterrestrial civilizations don’t follow our religious instructions. Whether it is possible that studying of alien life will teach us to respect religious beliefs of other people? Let’s hope.