Which animals will dominate on Earth if people will die

So, it happened — fell to Earth a huge meteorite, the villains have invented a merciless destroyer of the people the virus, the new tyrant unleashed nuclear war. In General, the complication of any post-apocalyptic movie: humanity is extinct, leaving only you, the only and last representative of the genus. At this point you may need to know what civilization will come after ours. It will be for the creature? Who they will look like and how will develop? Will finish if they end up as bad as we are? 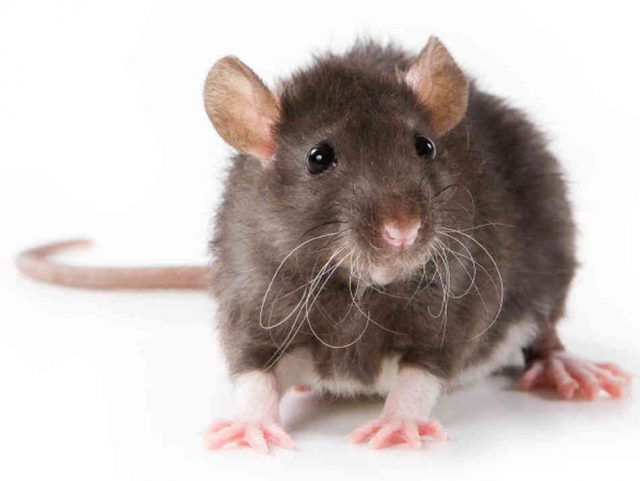 Rats. Oh yeah, rats love disaster! No matter where, how, under what circumstances — if there was a global scale disaster, you can rest assured the rats will be there. At the time of the extinction of humanity, the rats begin to capture the city, devouring everything in its path.

According to Richard Dawkins, British scientist and ethologist, a biologist studying processes of evolution, when the rats will eat everything that is left from people (us and our food), and then you can begin to drastically evolve. The process is the following: Apocalypse will cause a sharp surge in the rat population, but when the food runs out, they will have to fight with each other. This will lead to the rapid changing of the generations of rats. If the catastrophe that destroyed the people, related to radiation, the rats begin to mutate before our eyes. This will contribute to the newly found isolation of some populations of rats from the other in a post-human and post-transport world. In other words, there will be perfect conditions for evolution.

Given that the social structure of rats are sufficiently developed and these rodents have a high level of intelligence, they have a good chance to take the place of human on the planet. Of course it will take millions of years, but Richard Dawkins is sure that intelligent beings of the future, descended from rats, more real than we think. 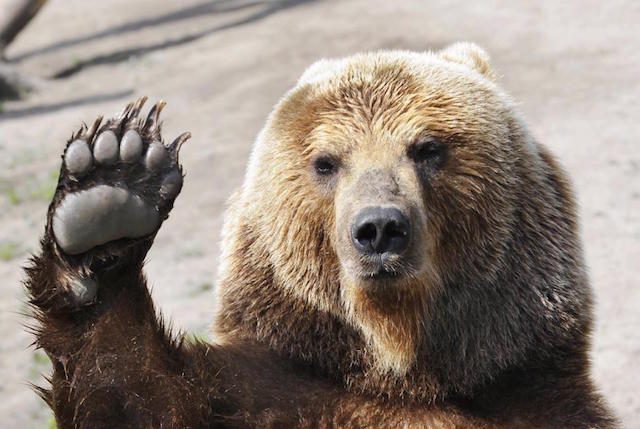 Bears. People, of course, is not the most powerful predator, but the predator certainly is a virtuoso. Large and dangerous animals had retreated before the weapons we invented to protect his own life. However, once you take out the person in the foreground will appear to such animals as lions, tigers and bears, ready to fight for survival. If left for a sufficiently long time in a state of struggle for dominance on the planet, they will begin to evolve, developing their intelligence. This opinion holds Ashley Bennison, a young scientist from Exeter University in England. In an interview with PS Mag he noted that of the large mammals considers bears to be the most promising candidates for the dominant role on the planet. The fact is that with the disappearance of the person will increase the number of herbivores (imagine how much “free” individuals, we daily absorbed), which in turn will expand the menu for predators — and make them even stronger. Against this background of food abundance intelligent mammals will get a good chance for development. It is the richness and availability of food contributed to a jump that made people from the “smart enough predators-gatherer apes” to modern man. The same leap could make and bears. 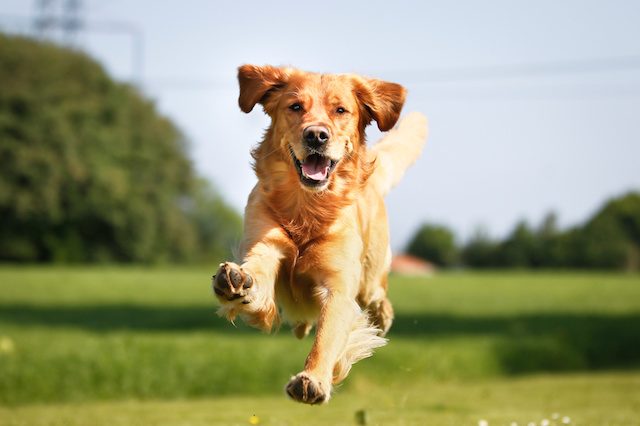 Dog. If you have been in developing countries, you’ve probably seen that dogs have “manage” certain areas of the planet. In big cities like Mumbai, a huge pack of wild dogs occupied some areas, which at night there is simply impossible to come by. Only in this city, for the period 1994-2015. more than 1.3 million people were attacked by dogs, including 434 fatalities. While nominally considered a town run by people.

As soon as people destroy some deadly virus, the dog will be able to occupy the city. The ruins of the cities was filled with giant dog packs. The former “man’s best friend” will dig trenches and fight the rats for the rest of the meat. A global catastrophe could trigger a massive increase in dog populations, and this would lead to curious consequences.

Now dogs are known as some of the most intelligent animals. They have complicated social relations, they experience emotions much like human emotions, for example, capable of empathy. A dog’s brain is, to put it metaphorically, a fruitful soil for intellectual development and evolution. At least, packs of dogs will be able to control our decaying city only due to its quantity. 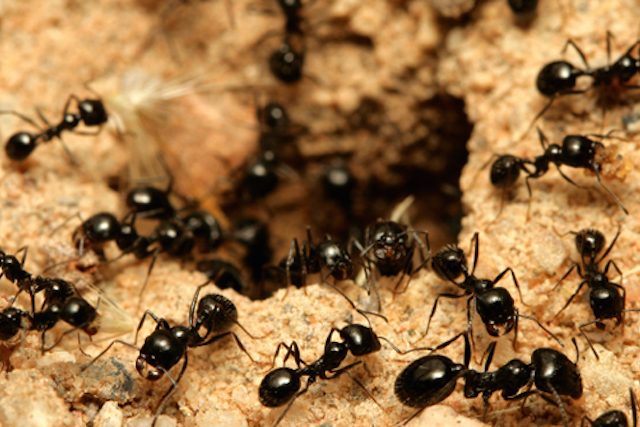 Ants. Leaving the world of mammals, refer to insects. Ants, of course, not like creatures that are able to press the man on the Ground. However, do not be deceived about them: perhaps it is the ants will rule the planet in the future.

Think about it: today the planet is inhabited by trillions of ants, whereas people only 7.3 billion Their total weight — if you could put it on the scales all people and all ants far exceeds ours. And they already win many other creatures as part of the development of intelligence. Yes, each ant individually is that it can not be compared with some animals, but if you take the whole anthill, we are talking about the collective mind.

The collective consciousness of ants is a complex phenomenon. A colony of ants has learned how to grow different species of fungi and raise aphids as livestock. Ants use military tactics: for example, pushing to the front of the weakest members of the colony, leaving in the rear the most powerful and fighting individuals. They have all the tools to expand and capture territory. At the moment there is a super-colony of ants covering almost the entire territory of California, leading a protracted war with the same scale colony in Mexico. It would be difficult not to see the Parallels with humanity. 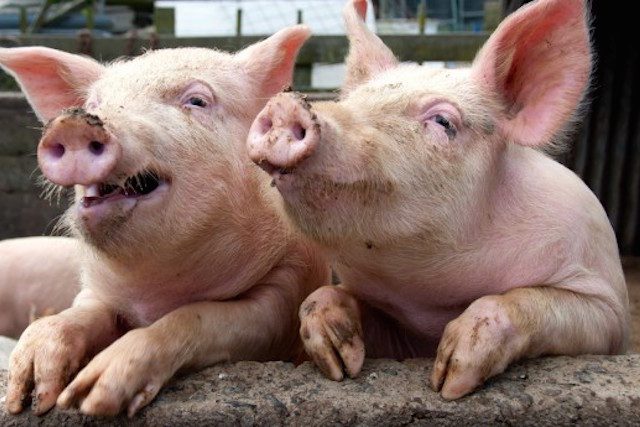 Pigs. “Planet of the pigs” sounds like the name of some of the wild movie, although it is much closer to reality than, for example, “planet of the apes”. Today in the world there are not so many monkeys but pigs is incomparably more — a huge number. And they are not so stupid and not so simple as it seems. The social structure of pigs is not easy, and do individuals demonstrate empathy. They use the social impact, able to manipulate other pigs have short memories and learn at an astonishing rate. In addition, pigs are one of the few animals that mate for pleasure. According to some estimates, pigs are even more intelligent than dogs.

One leap to the huge global population — and pigs will be able to reach the stage where we are now. 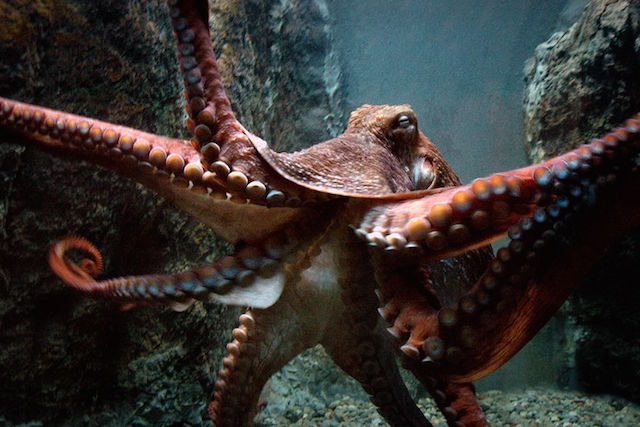 Octopus, yet they are not on a platter, inspire fear: they are very strong, smart, agile. They are able to learn through observation and can use psychological tricks. The brain of the octopus is one of the most advanced among the invertebrates, in addition it is located around the esophagus, i.e., even shot in the head not slay clam. However, the reasons why the octopus can take the place of man, are quite different. And they are truly terrifying.

Relative to body size, the octopus is quite large brain. And they have large eyes, with a lens similar to the human, which allows you to see about the same as we see. A certain superiority adds to the human presence of the thumb on the hands. An octopus has eight such tools: their tentacles are much more functional than our hands.

Octopus watching each other’s behavior, developing new habits — it can be a good basis for the creation of complex social relationships, forming a community of octopus on the bones of the human race. In General, octopuses are so promising for world domination, biologist, Professor Russell Burke, wondering why they haven’t taken over the world. 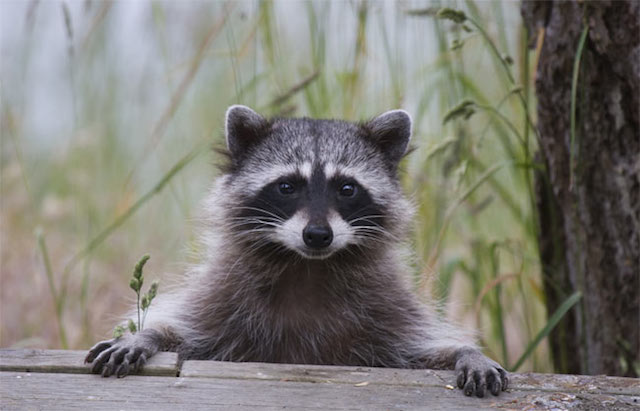 Raccoons. If you believe that raccoons are nothing like the person, you are mistaken. Most living creatures are found in this list, because they correspond to two important criteria: they have a complex social structure and keen intelligence. It’s all there and the raccoons. Besides, they are already faced with the difficulties that one experiences — especially in an urban environment. As soon as these difficulties suddenly arise — for example, will be slow-paced Apocalypse — the raccoons will be ready for the evolutionary leap, the mutations that will help to develop intelligence.

Yes, the likelihood that raccoons evolyutsioniruet to such an extent that it will begin to build skyscrapers and design the cars, small. But the idea that they will be able to smoothly develop in some of the larger forms tend to dominate the real. Like rats, raccoons will take millions of years for such evolution, but if humanity will disappear, these years will fly by. 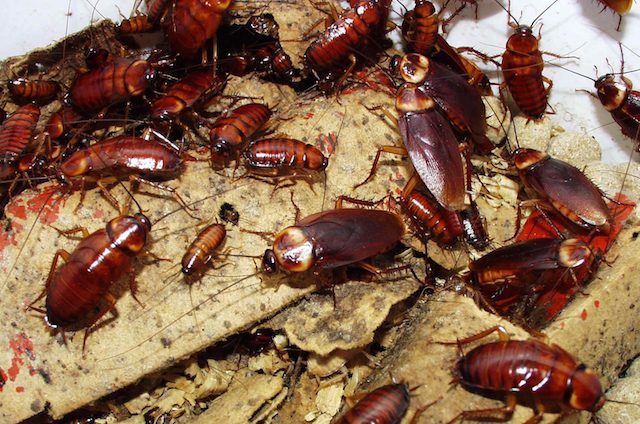 Cockroaches. These nasty little creatures can really move a nuclear explosion, and 10% of cockroaches are generally not susceptible to lethal doses of radiation. Cockroaches evolve at a breakneck pace: for example, they have developed resistance to toxic disinfectants in just a decade. It is as if the human immune system in only a few generations have become immune to cyanide of potassium. Yes, and they also reproduce at an incredible rate. It turns out, cockroaches are not only able to survive after a nuclear war, but also to adequately support their population. Will they be able to achieve human level intelligence? Unlikely. But give them a couple of million years to develop without any competition — and who knows… 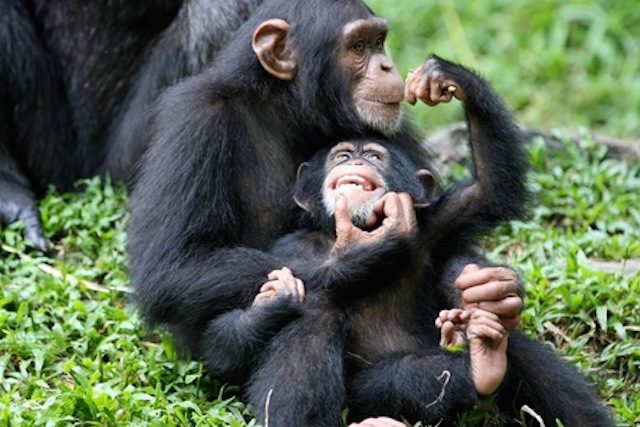 Monkey. Monkeys can not boast a large population, the number of individuals of most species are scarce. For this reason, they have not much chance to dominate the world, as, say, dogs. However, you should think about this scenario: what if the Apocalypse will be the result of any program for the protection of the monkeys, during which incredibly increase their numbers? Then, indeed, will not have to wait until the body cools down the last man to make the monkey seized power.

Large primates — gorillas, chimpanzees, orangutans, bonobos — very clever. Really smart. They can be taught sign language and other forms of communication. In their community a complex hierarchy, compete with a human. They use tools, show empathy, are able to learn by watching others, and can plan. Known cases when monkeys are hunted with guns. They are almost like us, only bigger. They already have everything to catch the person in the intellectual development. Or rather, something they still need: the complete absence of human beings on the planet. So, if there’s a nuclear explosion, the monkey will die with us. But if there is a virus that kills only human and will kill all the polls, there will come the era of the apes. 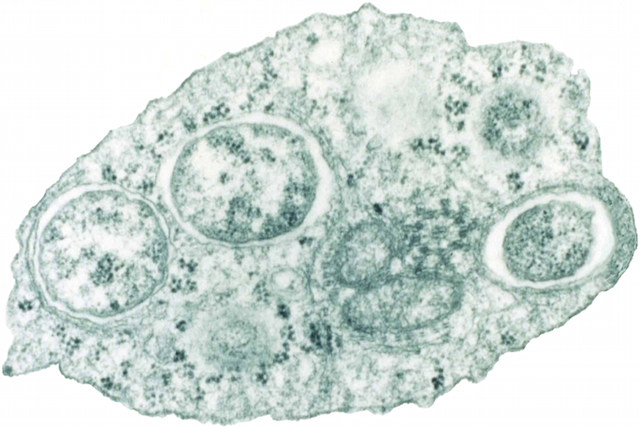 Wolbachia. This bacterium is a parasite, and it has a chance to rule the world, not only when humanity will die. She has these chances now. Wolbachia directs the fate of thousands of individuals. Bacteria live inside the cells of insects (almost 2/3) and arthropods, and their power over their owners is amazing. So, the bacteria can change the sex of the creature (!) from male to female, increasing their chances of dissemination (through eggs laying females). Inside more complex organisms, they are able to kill the embryo if it is a male, or change the seed so that it will be able to conceive only females. They can be built into the DNA of the host, causing a variety of evolutionary mutation. In other words, in their hands — the evolution of many creatures. Of course, Wolbachia not dangerous as the body is capable of intellectual development. But in a post-apocalyptic world, the intelligence they may not be necessary to decide the fate of other creatures and become the dominant living creature on the planet.