Why astronauts come back with the ISS short-sighted 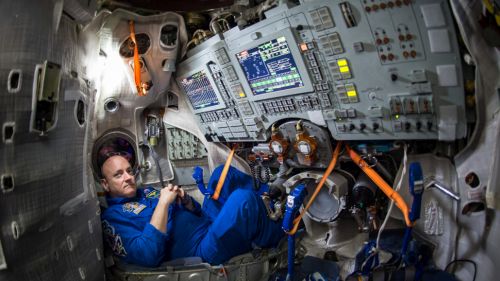 Astronauts who come back to Earth after long stay in space suffer from incurable short-sightedness. Now scientists have found out the reason of this indisposition, but it will be much more difficult to find a way of her decision.

Problem as researchers from Medical school of Miller at Miami university, in changes of volume in cerebrospinal fluid around a head and spinal cord speak. Long stay in conditions of zero gravity starts accumulation of this liquid, as a result, eyeballs of astronauts begin to become a little more flat that leads to short-sightedness. Increase in volume of cerebrospinal fluid also influences optic nerves that it is also bad as the optic nerve sends signals from a retina to a brain. All this causes short-sightedness in astronauts, and how to solve this problem, is unclear so far.

This disease has received the name a syndrome of disorder of sight because of intra cranial pressure. Was considered earlier that the problem arises because of the shift of vascular liquid in an upper body, but now it has become clear that the problem is slightly more serious as cerebrospinal fluid in usual conditions protects a brain from damages, and in space, it turns out, does harm.

On the earth she can adapt to unexpected changes in pressure when the person for example it is sharp to sit down or gets up from lying situation. But in space this system gets off due to the lack of the changes in pressure connected with a body pose. The scanning of a brain made before and after expeditions shows considerable flattening of eyeballs and a protrusion of an optic nerve. It is interesting also that even after flight the volume of liquid doesn’t decrease.

By means of new information scientists should find a way now how to prevent deterioration in sight at astronauts or how to cure him already on Earth (one of the offered options is a laser surgery, but she won’t be able to capture all scale of the caused damage). So far space still remains incredibly inhospitable place for the person.