Why birds don’t face in flight? 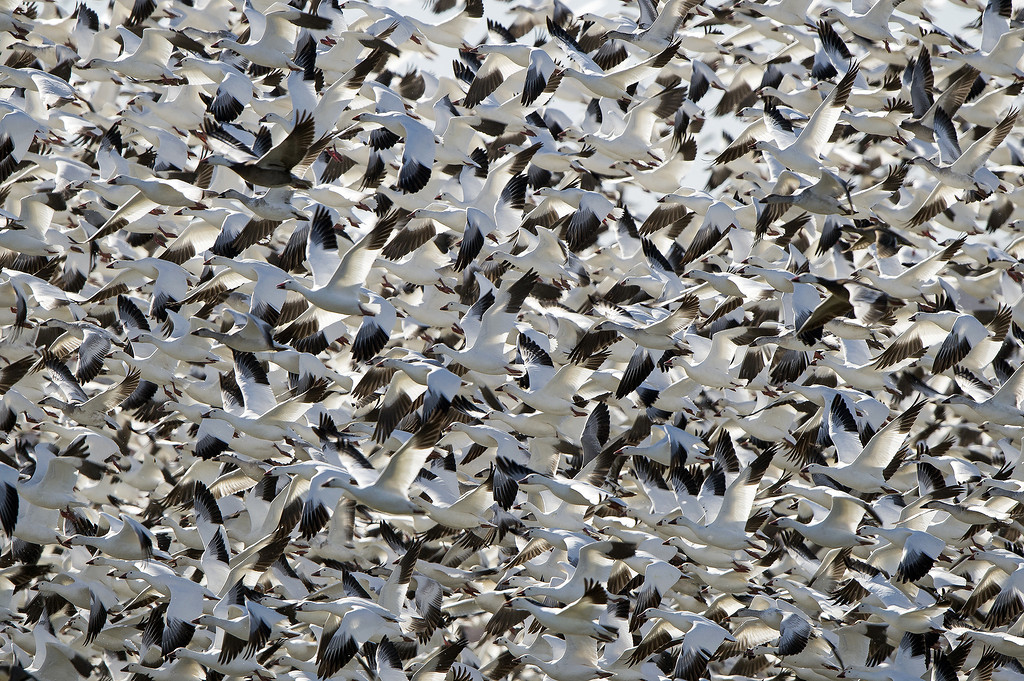 Who didn’t see flock of birds. And you remember how they synchronously change the direction in flight? Unless it isn’t surprising? How they do it?

Packs of starlings – one of surprising natural phenomena. Hundreds if not thousands, birds at the same time wave wings, showing pilotage miracles. Movements of each individual look accidental, but birds never face with each other as if controlled by the invisible conductor. Pack of starlings – a striking example of ability of birds to the synchronous flight. Biologov doesn’t cease to torment a question: as birds in flight manage to avoid collisions.

Here is how it looks on video…

Professor of the Queensland university Mandyam Shrinivasan believes that birds have managed to develop strategy of accident-free flight as a result of long evolution. The mechanics of bird’s flight interested Shrinivasan long ago, and he has decided to make a series of experiments with wavy popugaychik to simulate their trajectory. He has noted that birds were always inclined to bend around an obstacle on the right that promoted the smooth movement. During 120 observations there was no collision. 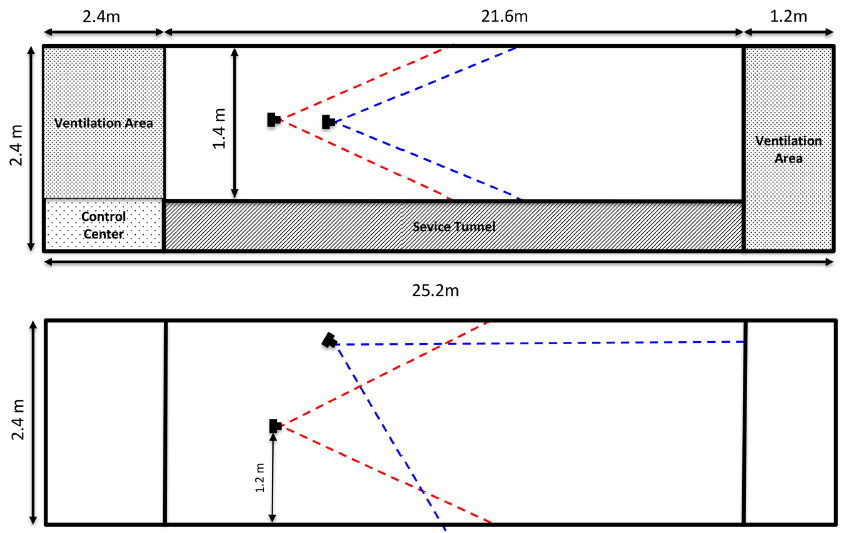 Professor Mandyam Srinivasan from University of Queensland (Australia) set the task to study what strategy apply birds to avoidance of collision on counter rates. For this purpose from two parties of the tunnel 21,6 meters long steam of birds towards to the friend were let off. The potential actions of birds which are of interest were taken for hypotheses in Bayesian network for calculation of their probability. The predicted probabilities it was compared to the observed facts. Thus researchers drew conclusions about exit strategies from collisions which work at birds.

Before testing of 10 wavy popugaychik of male (Melopsittacus undulatus) were trained to fly by the tunnel from beginning to end alone.

In 4 days 102 experimental flights of 7 couples constituted from 10 wavy popugaychik were written down. Any collision wasn’t fixed. Then carried out the analysis of videos with fixing how birds were displaced in the parties or on height in case of approach to each other.

Results were quite unexpected. Apparently from the table, birds showed tendency almost always to be displaced to the right though the probability of such shift strongly varies from an individual to an individual.

It is very curious conclusion. The researches conducted earlier on bees have shown that bees are inclined to be displaced to the left at rapprochement with each other. Anyway, but tendency to be displaced in some certain party is important knowledge. Obviously, all individuals have to have identical this knowledge in population. If birds at rapprochement are displaced in the casual party, then at the choice to the left/to the right the probability of collision will make 50%.

Despite separate cases of change of flight altitude, in general birds in case of rapprochement don’t change height, and are displaced in the horizontal plane. Most often — to the right. Scientists draw a conclusion about presence at wavy popugaychik of the peculiar traffic regulation which is sewn up at “the hardware level”. Possibly, it can be connected with a difference in the left and right cerebral hemispheres. So, at popugaychik the right hemisphere and the left eye are responsible for tactical tasks, such as detection of probable collision in flight. In turn, the left hemisphere and the right eye are engaged in other things, such as servicing of flight and control of speed. By the way, it is one of evolutionary benefits of animals with different functions of the left and right hemispheres (for more details see scientific work “Survival with an asymmetric brain: benefits and shortcomings of a cerebral lateralization”).

Thus, the research confirmed that availability of the simplest general rules will allow animals or machines to avoid collision.

Secondly, to develop an algorithm of change of height. One of participants of movement shall be displaced up, and another — down. Rules of change of height can be realized by different methods. For example, to assign hierarchical sequence number to each separate plane. In case of a meeting the plane with higher number in hierarchy is always displaced up, and with lower — down. It is difficult to implement universal hierarchy and she requires exchange of information between courts before rapprochement. Other option — to establish to each plane the rule of accidental shift up or down. In this case the risk of collision will decrease from 100% to 50%.

Scientists didn’t manage to understand yet how birds choose the direction of shift on height. Perhaps, at them a certain hierarchy works too.

But whether really the secret of the synchronous flight is so simple?

Shirinvasan with colleagues used video cameras with a possibility of high speed record for fixing of flight of 10 popugaychik since the opposite ends of the tunnel. They found out that they for avoidance of collisions of a bird used double technique. First, meeting other bird in air, they deviate to the right. Secondly, they select, to fly them above or below a counter bird. So far remains not clear that influences height choice. Professor assumes that, perhaps, the hierarchy of birds in pack is related to it, and plans to continue researches.

Though operations of professor Shirinvasan allow to look in a new way at flight of popugaychik, they don’t explain to the mechanic of flight of all birds. In pack of popugaychik other social structure, than, say, at starlings or albatrosses so it is difficult to draw on one example conclusions about the synchronous flight of all range of birds. Also there is a question of whether there were popugaychik house or wild and what impact the priruchennost of animals exerts on their flight.

As a result of other researches devoted to bird’s packs at least important conclusions were drawn. For example, the Italian physicist Andrea Cavagna found developed system of mutually annunciator in starlings. One individual can transmit to fractions of a second another the signal directing all pack designate from a predator or bypassing a hindrance. And David Williams from University of Washington found out that pigeons move in narrowness, using different line items of wings. Manipulating aerodynamics of the body, pigeons are capable to fly with incredibly high speed in difficult surrounding, for example, in the urban environment.

Pigeons add wings to fly by between hindrances: 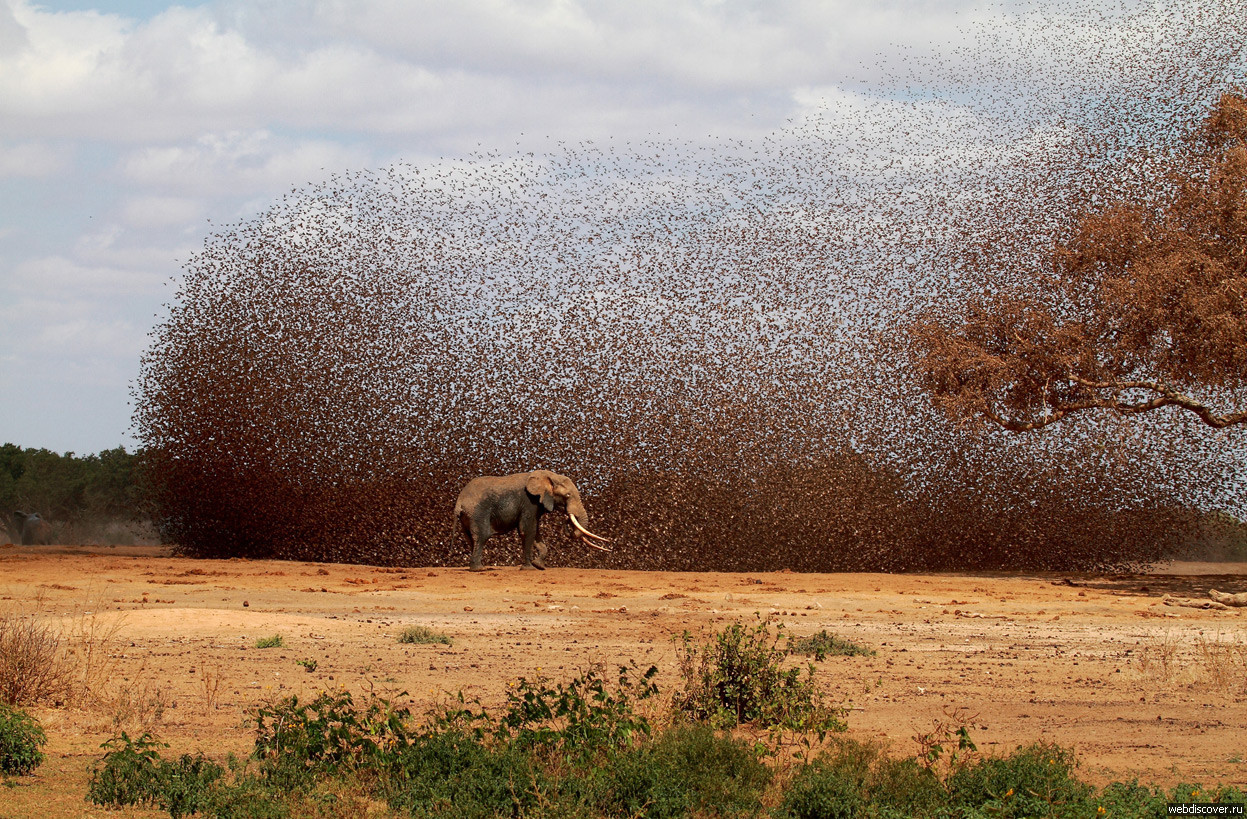