Why do Japanese macaques constantly sit in geysers 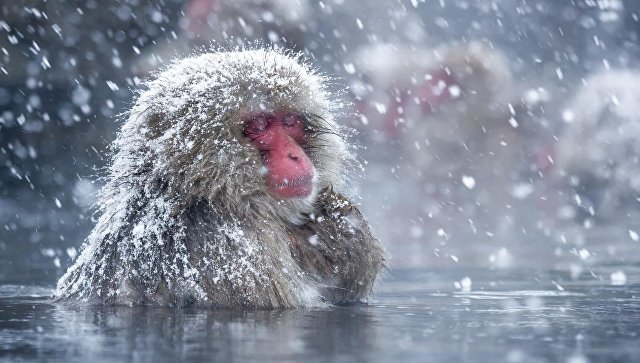 Famous macaques, living on the slopes of the mountains of Japan in the vicinity of volcanic hot springs, constantly sit in these “baths” to save themselves from winter colds and relieve stress, according to an article published in the journal Primates.

“Our observations show that hot baths help monkeys not only to save themselves from the cold, but also to relieve the stress associated with the winter, which, in general, is typical for humans.” This unique feature of snow macaques became a clear demonstration of how flexibility of behavior helps to survive in an extremely cold climate, “said Rafaela Takeshita of Kyoto University (Japan).

Japanese macaques (Macaca fuscata) still remain, in addition to humans, the most northern primates, who managed to adapt to life in temperate latitudes, where temperatures in autumn and winter often drop below zero. They live in large groups of several dozen individuals, in which females usually dominate.

One of the most interesting features of these macaques is that they are very fond of geysers, hot springs and other volcanic water bodies, which they spend almost all winter. Curiously, such a habit has appeared in monkeys relatively recently – in the middle of the last century, but has since spread throughout the macaque population living near volcanoes.

As Takeshita says, many townsfolk and naturalists have long believed that monkeys go to “winter baths” to keep warm in especially cold days. However, until now no one has tested how water procedures affect the health of primates and the chances of their survival.

Takeshita and her colleagues revealed several interesting features of this strategy of macaque behavior, when they watched the lives of about a dozen females living in the park area of ​​monkeys Dzigokudani. It is located in the mouth of the Kuttara volcano, which exploded about 20 thousand years ago, and in its territory there are many geysers and hot springs that periodically visit the monkeys.

As the primatologist notes, her team was interested not only in when and how often monkeys took hot baths, but also how they influenced the work of their body. To do this, scientists collected samples of macaques and measured glucocorticoid levels in them – stress hormones.

The concentration of these substances in the blood, according to scientists, can increase not only during difficult life situations, but also under constant physical exertion, including when it is cold or hot.

Comparing the proportions of the hormone in the body of monkeys before and after bathing, scientists hoped to understand whether the “baths” really need macaques for heating, or they like for other, social reasons. At the same time, scientists watched how the subordinates and dominant females communicated among themselves to take into account the influence of social interactions on the level of glucocorticoids.

As observations have shown, macaques do use hot keys of Kuttari for heating – in especially cold weeks they often visited “baths” and spent more time there. After each bathing session, the level of stress hormones in their blood decreased significantly, which was typical not only for dominant, but also for subordinate females.

The beneficial effect of “baths” was approximately the same for those and for others for one simple reason – “alpha macaques” had to spend a lot of energy and energy to conflict with subordinate individuals and drive them away from the “bath.” Therefore, they constantly experienced a high level of stress, which was only partially reduced by longer bathing.

Interestingly, the water procedures so strongly relaxed the monkeys that they did not pay attention to the huge number of tourists visiting Dzigokudani. The level of stress at this time was not much different from the indices recorded during the weekend.

In the future, Takesita and her colleagues plan to continue monitoring monkeys and try to assess how this habit affects the success of procreation and survival of primates compared to other groups of Japanese monkeys.