Why does a hammerhead swim on its side? 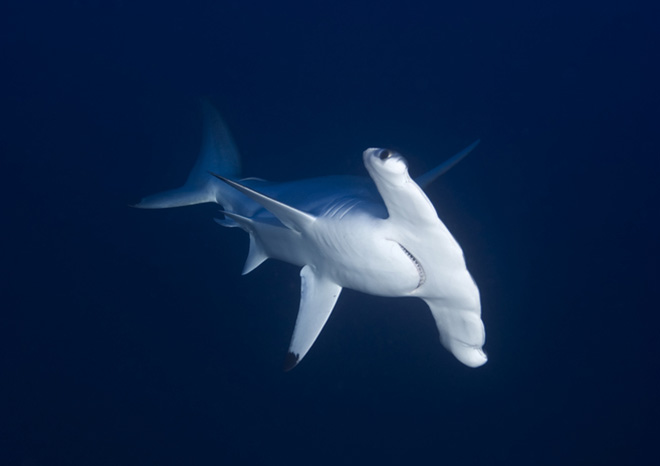 Scientists equipped the accelerometers with a shark hammer (Latin Sphyrna mokarran), which lives next to the Great Barrier Reef in Australia, and another caught near the Mesoamerican reef in Belize. The instruments showed that the fish swam on their sides for almost all 18 hours of the subsequent free-will (90% of the time), with an inclination angle of 60-75 degrees. Approximately every 10 minutes they leaned in the opposite direction, regardless of the trajectory of movement and depth.

Similar behavior was demonstrated by three other sharks in the Bahamas, for which scientists observed using an unmanned underwater vehicle with video cameras. Then they assumed that the strange way of swimming probably hinders the work of the organ located on the head of the hammer-fish and is responsible for detecting prey. In this case, the question arises, why should I swim on my side?

As it turned out, this has its advantages. Calculations using simple hydrodynamic equations to describe the thrust, buoyancy, lift and resistance experienced by the fish in the course of movement have revealed that due to the turn on the side and the large dorsal fin, the surface area creating the buoyancy force increases. As a result, the creation of the necessary lifting force requires a lower speed and, accordingly, less effort. Thus, the hammerhead shark saves energy on maintaining buoyancy and more easily withstands long trips.

These conclusions were also confirmed by experiments on a 64-cm hammer-and-fish model obtained using a 3D printer, which was placed in a special wind tunnel.

According to Adrian Glies, one of the authors of the study, this unexpected discovery may be useful for improving underwater vehicles. If you skillfully combine a fast and maneuverable “vertical” voyage with an economical “lateral”, you, like fish, can get energy benefits.