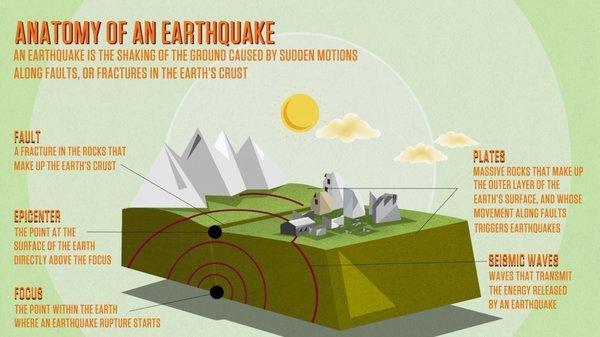 An earthquake is dangerous and very unpredictable, so it would be nice to learn about this phenomenon in more detail.

According to the definition, an earthquake is an earthquake and vibrations of the earth’s surface, reflecting the process of geological transformation of the planet.

It is believed that the primary cause of earthquakes are the global geological and tectonic forces that arise in connection with the temperature inhomogeneities within the planet.

So, as you can see on the infographics, many are mistaken, considering the epicenter as an earthquake point under the ground. Epicenter is a point on the surface of the earth exactly above the focus – i.e. OVER the immediate point of occurrence of tremors. The focus, in turn, is also called the focus or hypocentre.

Most often, earthquakes occur on the outskirts of tectonic plates. On the map are marked all the epicenters of earthquakes in 35 years of XX century, and so we can clearly see the outlines of plates on our planet

How many earthquakes occur in a year? 10? 20? 50? No, from the news we learn only about the most destructive of them, but in fact every year seismographs register more than a million (!!!) earthquakes. ??? Of course, the number of recorded fluctuations increases every year, but only because the planet also increases the number of points of observation for earthquakes and improves instruments for recording them. For example, 100 years ago there were only about 40 earthquakes recorded per year.

Who among you remembers the “earthquake in Moscow” on May 24, 2013? Then it was the echoes of the earthquake in the Sea of ​​Okhotsk, almost in another part of the world. But since it was a “deep-focus” earthquake, it got through all of Russia to Moscow itself. Considering that the speed of a seismic wave can reach 8 km / s, it can shake up the whole territory of our huge country in 12-15 minutes. ?

At the moment, scientists know the following mechanics of the earthquake: friction along the fault prevents slipping rocks, resulting in energy accumulation. When the stress reaches a critical point greater than the frictional force, a sudden rupture of the rocks occurs with their mutual displacement, and the stored energy, released, causes the wave oscillations of the earth’s surface in all directions from the hearth like sound waves. Earthquakes can also occur when the rocks collapse in the folds, when they split, forming faults.

If you think that earthquakes happen only on earth, then … yes and no. Because on other planets they also happen, but they are already called, of course, differently – for example, on the moon – “moonquakes”. ?

Yes, surprisingly, the Moon also has seismic activity, and our companion sometimes behaves more alive than just a round piece of stone. ? During the NASA space expeditions, the Moon was studied by seismometers, and the information obtained showed that the Earth’s surface is seismically active.

Moonquakes are much weaker than earthquakes and happen less often, but they can also be up to 5.5 points on the Richter scale, moreover, they usually last over 10 minutes, whereas fluctuations on the Earth take place only 1-2 minutes.

Moonbreakers are divided into 4 groups according to the reasons for their occurrence:

1) tidal – occur twice a month and are caused by the influence of tidal forces of the Sun and the Earth;

2) tectonic – irregular and caused by shifts in the soil of the Moon;

3) meteorite – because of the fall of meteorites;

4) thermal – the reason for them is a sharp heating of the lunar surface with the sunrise.

I hope you were interested in learning about this “physical activity” that is terrible for a person, but scientifically grounded and even sometimes necessary for our planet.