Why in Kazakhstan in few days 200 thousand saigas have died

In far steppes of the central Kazakhstan in May, 2015 there was indeed an extraordinary and tragic event. Females of saigas gathered in large quantities on the open plain that in short 10-day term to bring descendants into world. The BBC operators who arrived there to shootings and group of researchers became witnesses of how hundreds of thousands of saigas died during only a few weeks. This tragedy managed to be imprinted on the camera and to show in the last episode of the documentary of BBC “the Mother Earth of II”.

But why there was this mass loss of animals? Glorking in huge herds for very short time, saigas make huge live weight, and the probability of loss of cubs as a result of attacks of their principal enemy of a wolf from it decreases. Cubs at saigas are born large and well developed. The biggest among wild hoofed animals — and in several days he is able to run away weight of a newborn calf in proportions from a predator. It is necessary to bring forth an offspring in the shortest possible time also in order that cubs managed to eat a lot of a juicy spring grass which fades and dries from the heat coming to these severe continental steppes in the summer.

In 1994 other command of BBC shot the first film about the nature of the former Soviet Union. In it it is possible to see huge herds of saigas.

But since then a lot of things changed. At the beginning of the 2000th years of almost all saigas poachers who hunted for their horns and meat exterminated. In this regard in 2001 saigas were entered in the Red book of the International union on conservation and natural resources.

By 2015 operation of the governments, scientific and non-profit organizations began to bear fruit. If at the beginning of the 2000th the livestock of saigas was reduced to a minimum, making 50 thousand animals, then at the beginning of their 2015 there were already about 300 thousand. Generally such big growth of a livestock came thanks to one population from the central Kazakhstan. Exactly there in 2015 “the Mother Earth of II” BBC operators went to shootings of an episode to shoot bright scenes of a mass otel.

They were accompanied by the group of researchers which is brought together by the Kazakhstan association of saving a biodiversity into which the scientists from Royal veterinary college who decided to make observations for otely to learn about a status of population of saigas more also entered.

But the film crew wasn’t ready at all to what happened in 2015 directly in front of her eyes. Getting off in herds for childbirth, antelopes weakened, movements at them became more and more not coordinated, and they died immediately. Corpses of saigas covered the huge territory stretching for hundreds of kilometers already soon. After females cubs began to perish. There was such impression that for several days in herds with a ten-thousand livestock all calfs died.

Such mass case became the awful tragedy. In the world searches of answers to this riddle of the nature began. Time of an explanation were absolutely ridiculous and strange — several times even mentioned newcomers in social networks.

We as researchers of saigas, suffered from division of feelings. On the one hand, we had a despair because of death of animals whom we studied and for whom cared. And on the other hand, we had a curiosity and aspiration to solve this amazing scientific riddle. What for the mechanism could destroy huge herd of saigas in such short terms? Usually infectious diseases begin and extend differently; process of a disease of population goes gradually, and among other things, not for the benefit of parasites to destroy all population with which they are fed.

Perhaps case here not in an infection, and in some toxic agent from the environment, or in weather anomaly? But what for a factor of the environment such large number of animals on the huge area of 168 thousand square kilometers exceeding the territory of England and Wales can almost kill at the same time? And as for weather and vegetation, it here constantly changes at this time.

Thanks to a grant of the British state fund NERC Urgency and generous donations of welfare institutions on environmental protection and people from around the world we very quickly created multinational cross-disciplinary team for studying of a disease and its reasons.

This team was headed by Richard Kok from Royal veterinary college, and colleagues from the Kazakhstan State Research Institute of problems of biological safety, the Kazakhstan association of preserving a biodiversity, the Oxford and Bristol universities, the Food and Agriculture Organization of the United Nations and other institutes were its part. Among us there were ecologists, specialists in pasturable lands, veterinarians and experts in creation of spatial models. We sent one group into place for collection of samples of the soil, remains and the dying saigas in a week after the beginning of a case.

On the one hand, we have found a solution. Toxic influence of the bacterium which is usually in airways of animals became an immediate cause of death of saigas. It is called Pasteurella multocida. But there was right there the following question: why this usually harmless bacterium became such infectious and deadly? What external or internal reason has provoked spread of an infection and a case? What investigation was: decrease in immunity of saigas to these bacteria, her rapid distribution, or both?

Studying of these questions is similar to Russian dolls. Removing one layer of explanations, we find even more questions inside. We have studied old field notes of Institute of zoology of Kazakhstan for 1988 when there was a similar mass case of saigas; we have checked data of scientific research of mass death of other types; have analysed distinctions as a part of a vegetable cover for different years. After that we have constructed a number of statistical models to study changes in temperature and rainfall in different time and spatial frames.

We have also checked tissues of animals and samples of the soil and vegetation for availability of various toxins and other pathogenic substances to understand whether there is no more deep infection here. For today the collected materials and the conducted researches indicate a combination of the short-term, but influencing a situation weather changes, and a physiological stress from an otel which have caused cascade effect of virulence. But we haven’t found neither toxins in the environment, nor any deep infections, nor influence of newcomers (so far).

These events have attracted to themselves huge interest of the public, as in Kazakhstan, and abroad. People need prompt replies, and they want that we have found the solution of problems that it nevermore repeated.

However it seems that we won’t be able to calm them. It is quite probable that in the conditions of climatic changes of such event will occur more often, and at least. Nevertheless, we want to tell the following publicly: strong and numerous populations of saigas which need to be protected from poachers reliably are necessary.

It is the look which is constantly living on the verge, poorly protected from a mass case, but capable to be restored very quickly. To survive, saigas have to exist in large numbers on open pasturable grounds. This large-scale, widely publicized accident has opened new opportunities for researchers of saigas and ecologists who can demand reliable protection now for their populations that these animals could breed quietly, showing amazingly spectacular performance for the sake of which the film crew of BBC has arrived to these wild steppes. 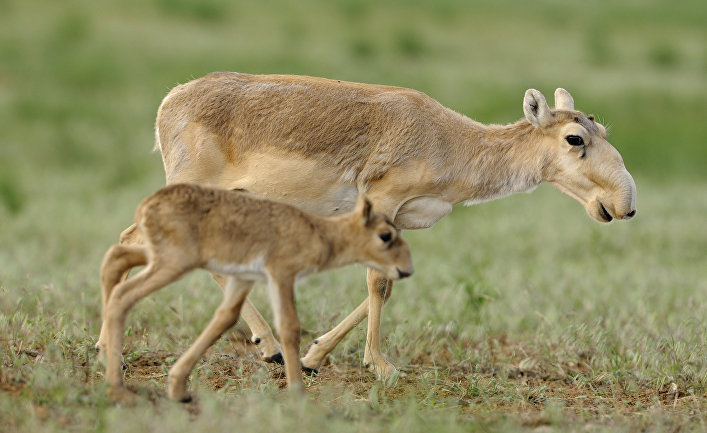