Recently one employee of the airport managed to make an improbable picture – to imprint the airplane at that very moment when in it the lightning struck. But what image it was succeeded to avoid ruin?

Halldor Gudmundsson saw a large electric spark discharge of a lightning from a window of the office which is to the northwest from the international airport Keflavik in Iceland. He turned on the camera on the phone and began to remove, hoping to seize the moment when the powerful discharge once again pierces the sky. Suddenly at the time of shooting on the screen there was an airplane which just came off a runway of the airport – and almost right there in it the lightning struck.

It was an unusual show, but, indifferently, the airplane continued to gain height, there was the heavy rain. “It was very interesting to watch, but at the same time and a little terribly,” Gudmundsson who managed to photograph such improbable moment speaks. 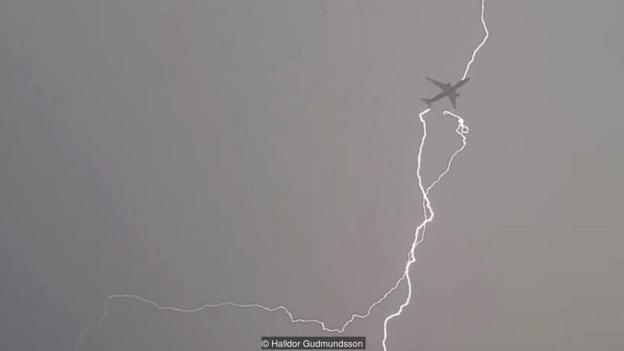 This flight from the capital of Iceland of Reykjavík to Paris came to the end on October 3 safely, and the airline assured BBC channel that the plane didn’t sustain any damage. The representative of airline specified that the lightning quite often gets to planes. As, in that case, it is possible to avoid victims among people and breakdowns of the plane if lightning stroke force about 1 billion joules is a quarter of ton in a trotyl equivalent.

Lightning discharge chooses a line of least resistance. Therefore if on the way the plane meets, it passes on its metal covering, without getting inside and without touching important devices. The covering protects crew, passengers and onboard systems, Chris Hammond, the former pilot and the member of the British association of pilots of the air-transport companies explains.

“In a covering of the plane there is a metal gauze,” he speaks, “it is some kind of gauze protecting from the strong electromagnetic radiation arising in case of lightning stroke”.

Besides, onboard electronics and connections with a fuel tank, for example, are screened copper grids for their protection against external electric discharges. Safety is carefully checked before the plane arrives in operation, in verification process also imitate lightning strokes to be convinced – the covering and internal screens will sustain these powerful categories.

Gudmundsson’s photo, notes Hammond, is an evident illustration of the fact that everything works precisely as it is necessary. It is visible that the lightning hits into a plane nose, and then leaves through a tail and edge of a wing. The plane — as if the flying Faraday’s cell, on its board everything is protected.

Nevertheless, the lightning stroke most likely will be noticed by people onboard. For example, as passengers of two flights tell, flying by over the western part of London in April, in case of hit of a lightning in the plane they heard the loud cottons similar to shots.

A few years ago, planes weren’t so well protected from lightning strokes. Hammond remembers how once many years ago it piloted the plane and expected when resolve it landing in San Francisco. After one especially strong flash of a lightning, he remembers, “all screens went out”. Fortunately, the plane was at that time equipped with analog devices and it managed to keep control over the airborne aircraft. Gradually on-board computers returned to life, and the plane could land safely.