Why lizards don’t choke under sand? 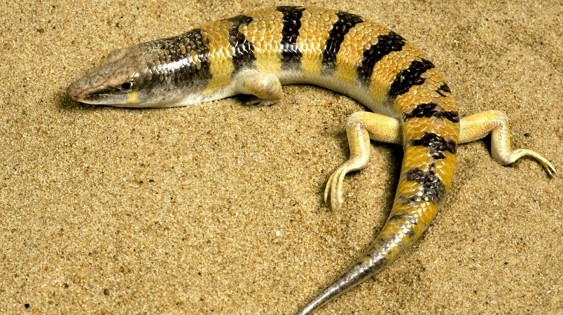 Ordinary сцинк (Scincus scincus) – a lounge-lizard, widespread in deserts of the North of Africa and the Middle East. Capable to move quickly as if “floating” in sand, she carries out almost all life, having dug in it. Sand protects stsinok from predators and, of course, from sunshine. However such way of life is connected with new problems – for example, with danger to choke small grains of sand.

Having dug in sand, stsinka risk to fill quickly with it the lungs and pneumatic ways, but it never occurs. Moreover, when the Austrian biologists led by Werner Baumgartner opened several lizards caught in the desert, they did not find in their respiratory system a uniform grain of sand. But they did not find and anything that could carry out a role of the filter detaining small particles. Authors tell about it in article published by Journal of Experimental Biology.

These finds – more precisely, their absence – set scientists thinking as stsinka are protected from hit of sand at breath. Then to the area of a thorax the animal connected the tiny sensors which allowed to monitor their respiratory movements at those moments when lizards are on sand or under it. It was found out that, having dug, they change the nature of breath and exhale 60 percent stronger than when are on air, and inhale 70 percent more weakly.

The weak breath absorbs less grains of sand, and those that after all appeared in the top airways, settle on mucous. Outside of them can throw out a powerful exhalation, and a part of grains of sand is swallowed together with a lump of slime and removed through a digestive tract. Not without reason in their intestines of sand it appeared absolutely much.