Why not all plants green? 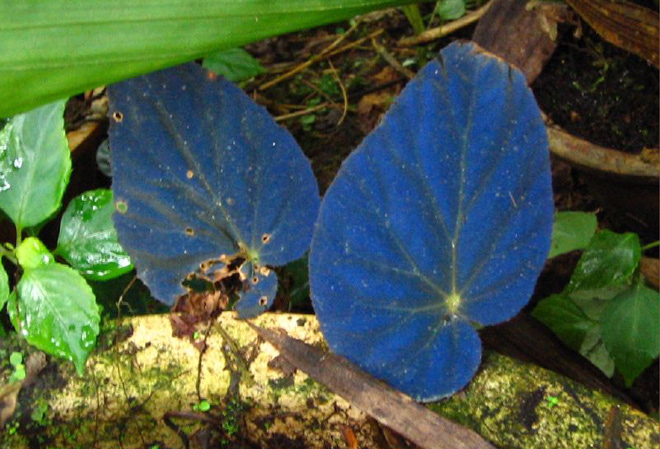 Imagine the place on Earth where oceans are complete of violet seaweed, and the woods are met by modulations of blue plants. And it is not a scene from the science-fiction novel at all, and reality of the past and the present.

It is considered to be that vegetable life on our planet shall be green: plants make energy by means of chlorolayers, chlorolayers consist of a chlorophyll, and a chlorophyll — green. However not everything is so unambiguous.

Researches showed that the earliest photosynthesizing organisms were violet color because relied on photosynthesizing chemicals which absorbed light waves, different in length. And, it appears, flickering blue plants still exist: Begonia pavonina, or the Peacock begonia, lives in foggy rainforests of Southeast Asia where you will seldom see sunshine. As scientists found out, iridescent azure leaves help to survive in the conditions of low illumination of a begonia.

Unusual coloring happens from the photosynthesizing structures called by iridoplasta, the coauthor of a research Heather Whitney from University of Bristol in England told. As well as chlorolayers, these structures provide cellular mechanisms for photosynthesis. They absorb light and use it to synthesize molecules which keep energy. In case of light collection they also rely on a chlorophyll — a pigment which absorbs red and blue light and reflects green, giving to plants their typical type.

But when Whitney and her colleagues studied cages of B. pavonina under a microscope, noticed that iridoplasta have very strange form. They were located the friend on the friend, a membrane over a membrane, and divided by a thin layer of liquid, almost like a hill of the pancakes watered with maple syrup.

The effect is similar to what occurs when you see oil floating on a water surface. “Light passing through such structure slightly refracts that is called an interference — Whitney explains. — So this iridescent reflection turns out”.

Flickering blue begonias demonstrate that plants can adapt to illumination due to structural and chemical changes. This stratification of iridoplast allows structure to absorb long-wave light (red and green), available in the dark under a canopy of the wood. Blue light at the same time is reflected, creating surprising shine.

Scientists also consider that this stratification slows down photosynthesizing reactions, promoting even more effective accumulating of energy. According to Whitney and her colleagues, this opening proves improbable universality of plants. When they appear in adverse conditions, they should look for original ways to adaptation in the new world. And who knows to what else tricks plants can resort to survive.