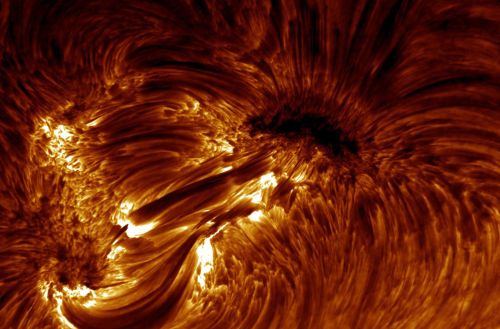 The question of why several kilometers of the solar atmosphere have temperature 200−500 times higher than temperature solarly of a surface, long time remained open. But specialists of NASA are close to a solution.

The life experience prompts to us that the closer to bring a hand to a flame, the will be hotter to a hand. However in space many things work not as prompts household experience: for example, temperature of a visible surface of the Sun constitutes “only” 5800 K (5526,85 °C), and here on removal, in external layers of the atmosphere of a star, rises to millions of degrees.

Try to solve this small private problem known under the name of the Problem of heating of a solar crown, one of unresolved problems of modern physics! When the phenomenon was found, it seemed to scientists that the solar crown breaks the second law of thermodynamics — energy from within a star can’t be transferred to the area of a crown, passing a surface.

Till 2007 there were two main theories explaining a warming up of a solar crown. One said that magnetic fields disperse crown plasma to improbable energies thanks to what it purchases temperature higher than temperature of a surface. Authors of the second theory inclined that energy breaks in the atmosphere from within a star.

Researches of Bart De Pontyyu (Bart De Pontieu) and its colleagues proved that the shock waves proceeding from a subsoil of a star have sufficient energy constantly to feed a crown with energy.

In 2013 NASA launched the probe IRIS which continuously removes border between the surface of the Sun and a crown in the different ranges. The answer to the same question was its purpose: whether the solar crown has one fixed source of heat, or energy gets to the atmosphere of the Sun as a result of a set of explosions? The difference between these two explanations very much of a bike but to understand what of them is faithful, it is very difficult because of huge heat conductivity of a crown. As soon as in a separate point in the Sun there is an energy emission, temperature almost instantly grows in the huge territory around this point, and it seems that temperature of a crown is more or less permanent.

But the device IRIS fixed changes of temperature of a crown with such small interval that scientists managed to see a set of “nanoflashes” (nanoflares) where magnetic lines were crossed or imposed. The question of whether there is a source of thermal radiation which evenly and constantly heats a crown, remains open, but now is clear that at least a part of energy gets to the atmosphere of the Sun from internal parts of a star as a result of such explosions.

After observation of IRIS has confirmed the device EUNIS. Now scientists are almost sure that the solar crown heats up because of a set of the small explosions releasing the heated plasma which temperature is much higher than temperature of a surface of the Sun in the atmosphere of a star.