Why there are no reasonable dinosaurs, crows and monkeys 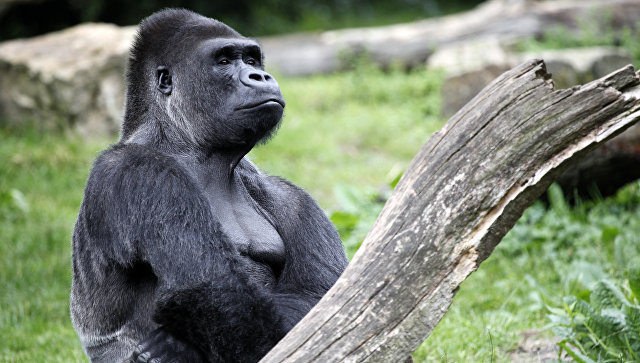 In the process of evolution, many species had a chance to gain intelligence, but only man took advantage of it. Up to a certain point, dinosaurs, birds, and most primates developed the brain quite effectively and acquired key qualities: bipedalism, prehensile brush, sociality. What prevented them to take the place of our ancestors?

The small predatory dinosaurs Troodon inequalis, which lived at the end of the Cretaceous (84-66 million years ago) in North America and Asia, had a rather impressive brain. As calculated by Canadian paleontologists, the ratio of brain mass to the average predicted body weight (encephalization coefficient) is six times higher in troodonts than in relatives.

If we add warm-bloodedness to this (American researchers showed that the body temperature of prehistoric dinosaurs ranged from 36 to 38 degrees), bipedality, a complex way of getting food (the troodon was a predator, but fed on plants) and a three-finger prehensile brush, then we can conclude: the small theropod was all that was necessary for becoming a rational being.

Intellectual evolution was prevented either by an inappropriate asteroid falling to Earth or by a gradual extinction that began forty million years before the dinosaurs disappeared from the surface of the planet.

“Some paleontologists claim that the increase in theropods in theropods were comparable to those in the australopithecus — our ancestors. If they had not been wiped out by universal extinction, even at the same pace of evolution without acceleration now they would have 1.1 thousand cubic brain centimeters and would have been quite reasonable, ”writes Stanislav Drobyshevsky, Candidate of Biological Sciences, associate professor at the Department of Anthropology, Faculty of Biology, Lomonosov Moscow State University, in the book“ The Distinguishing Link ”.

Reconstruction of the skeleton Troodon inequalis

The descendants of flying lizards – birds – have survived to our days and could also have evolved into intelligent creatures if they refused to fly. They laid claim to “world domination” 65 million years ago, when mammals were small and weak.

However, for the conquest of heaven had to pay dearly – the bones of birds became lighter, the brain decreased. Saving weight even forced to get rid of the “junk” of DNA (parts of the genome that do not encode any proteins). In addition, the need to coordinate movements in flight led to an increase in the cerebellum, and there was no place for the development of other parts of the small brain.

Probably, a return to a terrestrial way of life could give their evolution a new impulse, if not the absence of predators. When there is no danger, the view “relaxes”, the brain becomes simpler. An example of this is kiwi, ostriches and dodos, which do not shine with mental abilities even among birds.

Why other primates, in addition to Homo, did not become reasonable? An extinct Oroopithecus, according to some sources, could have become smarter much earlier than our ancestors, but both baboons and gorillas went with a man literally nostrils into their nostrils, but in the process of evolution they turned the wrong way.

In terms of brain size, the first great apes (African proconsul, Turkanepiek) are comparable to modern baboons. They and our ancestors developed at about the same speed, and the relative area of ​​the associative frontal cortex is generally the same as ours now.

Moreover, some species of baboons came to the savannah at the same time as the Australopithecus, and even mastered it more successfully. At least, they had previously settled out of Africa around the globe. But the baboons, unlike humans, chose the path of aggression and strict hierarchy in the monkey pack. The power of the alpha male is almost unlimited, and with any disobedience the baboon shows sharp fangs, which, by the way, our ancestors got rid of under similar conditions. Such a social system works very well, because the baboons, who had reached their ideal even in the Pliocene, remained virtually anatomically unchanged for several million years.

The gorilla did not change either, because in nature it has almost no natural enemies. Moreover, this monkey, unlike other primates, in the wild does not use tools. But in captivity, it sometimes turns out to be smarter than our closest relatives of chimpanzees. The size of the gorilla brain corresponds to the lowest values ​​in modern humans and exceeds the parameters of Australopithecus. 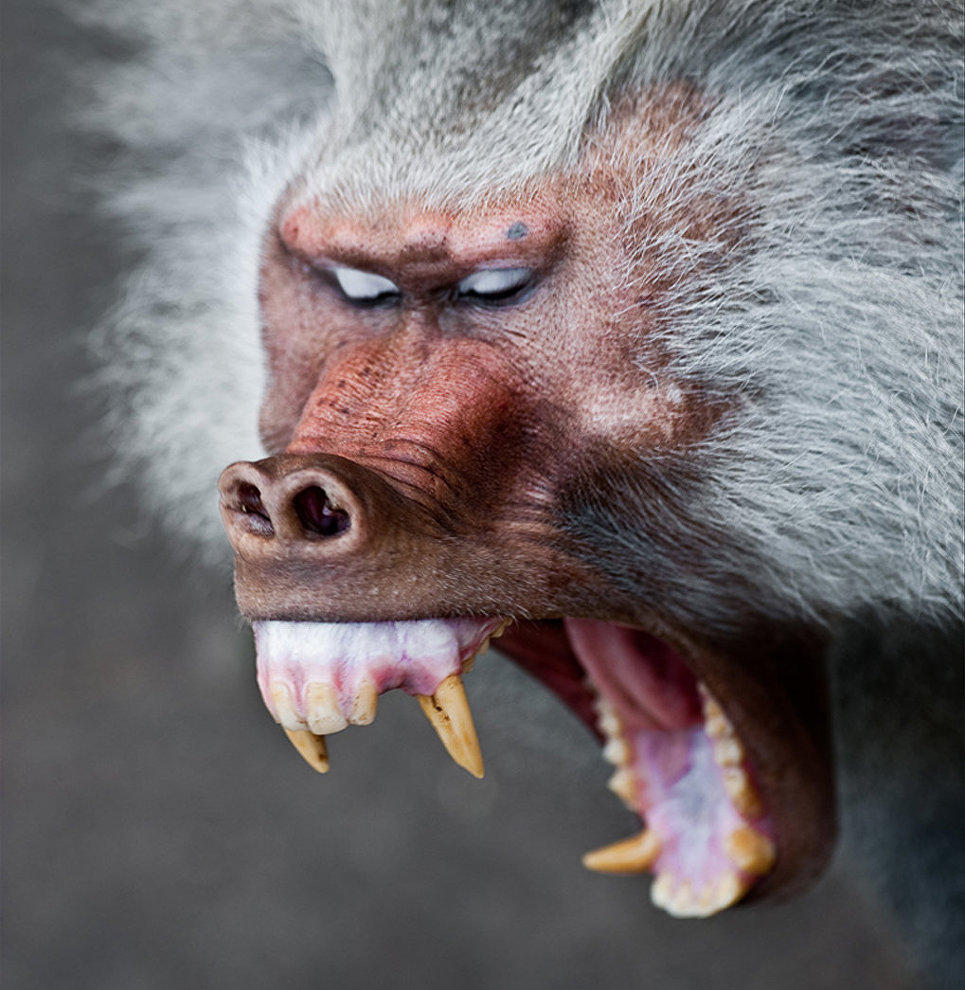 Baboons, unlike our ancestors, took the path of aggression and strict hierarchy in a flock

Underwater cities of whales and dolphins

The pledge of intelligence is a big brain, and its dimensions can be infinitely increased only in the aquatic environment. Therefore, for example, already 33–23 million years ago, the absolute size of the brain and its tortuosity of cetaceans reached the level of advanced hominids. But everything is known in comparison – in relation to body mass, the brain of dolphins and whales is rather small, and the transformation of the paws into flippers does not contribute to instrumental activity. Although there are known cases when female dolphins have taught cubs to look for food, having previously put a sea sponge on their noses.

“Fishing and shrimp is not the most ideal stimulator of mental progress. No matter how difficult a flock of dolphins pounding a school of fish, it remains a corral of fish. They have little chance of rationality. The same can be done about pinnipeds. Food specialization, turning legs into flippers , and the bodies in the fatty skin are not conducive to the development of intelligence “, – writes Drobyshevsky.

There are some chances for the creation of a marine civilization for sea otters (Enhydra lutris). These are highly social animals, they have a grasping brush and, as a result, a rich labor activity. For example, in order not to remain hungry, they split sea urchins and shells with pebbles. The only thing that hinders the transition to the next evolutionary level is that they are too good in their habitat. 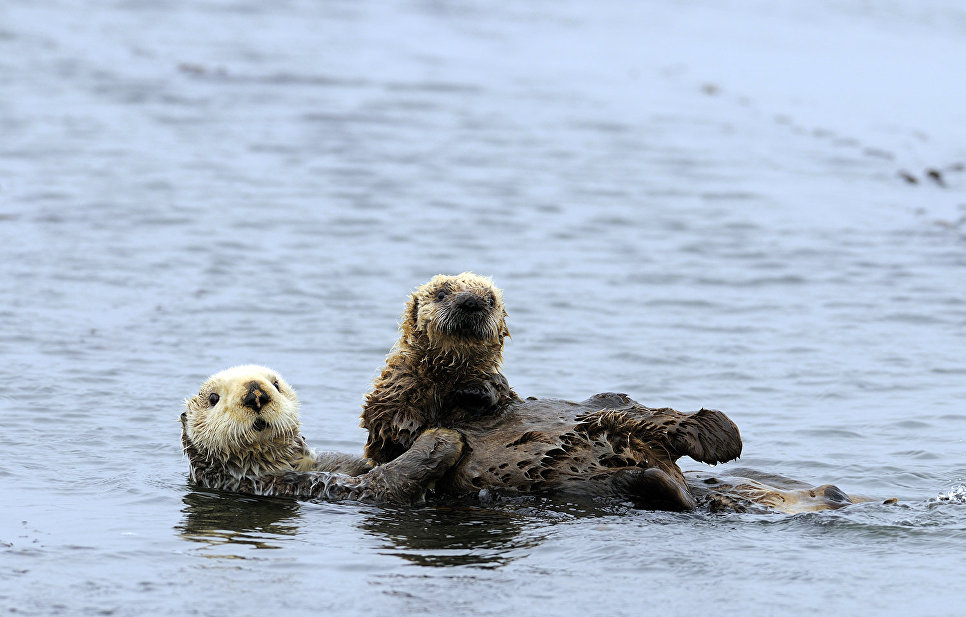 Kalans have all chances to become intelligent beings.