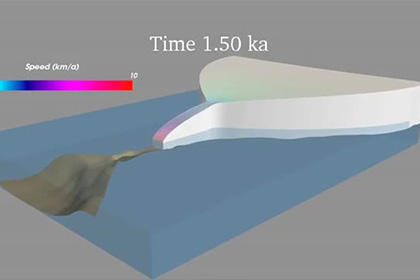 American climatologists have described the mechanism of the degradation of the Laurentian ice sheet, which in ancient times covered most of modern Canada and the Northern United States.

The main conclusion is that the events of Heinrich (periodic changes in the composition of bottom sediments covered in the ancient Laurentian ice sheet areas) caused by intrusion of warm ocean waters within the glacier.

The study establishes a link between Heinrich events and oscillations Dangora — Ashera — abrupt climate fluctuations during the last glacial period. In this approach, the degradation of the glacier caused by climate change led to the transfer of matter, formed a characteristic event of Hiringa deposits.

The work allows scientists to understand how the destruction of an ancient glacier led to the spreading over vast territories of North America, the massive ice floes and the formation of icebergs in Guzanova Gulf and the North Atlantic ocean.

Computer modeling conducted by scientists, suggests that fragments of the modern Greenland and Antarctic ice sheets (the only remaining currently on the planet), located below sea level, as a result, even a small increase in the average temperature of the atmosphere is likely to be a source of formation of massive icebergs in the southern ocean.