Will there be jobs for people in the future? 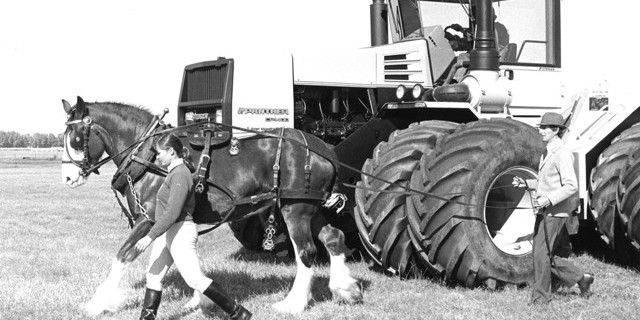 At the beginning of the 20th century, the work of the horses seemed to be safe. However, in the next 50 years, cars and tractors ruthlessly “cracked down” with hoofed animals, completely replacing them on roads and agricultural fields. Some futurists see in the fate of horses an instructive story for mankind.

The traditional reaction to these fears – people – are intelligent beings and adapt more easily to new conditions than draft animals. But as robots get smarter, people look more vulnerable.

A new study by Duron Acemoglu from the Massachusetts Institute of Technology and Raskalo Reprepo of Boston University found that from 1990 to 2007, Each industrial robot added to a thousand workers reduced employment in America by almost six jobs.

Humanity, most likely, will not be completely replaced by machines, but a parallel with horses, nevertheless, is appropriate.

The International Federation of Robotics defines industrial robots as machines that are automatically monitored and reprogrammed; Equipment single-purpose designation does not apply to them.

In the whole world, these “creatures” are just under 2 million. In America there are fewer than two robots per 1,000 workers (in Europe, a little more than two).

But their number is growing rapidly, as the range of tasks that they can perform is expanding, so that studies about possible loss of work due to robots should be taken seriously, the British magazine The Economist believes.

Acemoglu and Resrepo in their work tried to exclude all the side causes. Their findings are not based on several completely robot-oriented regions or sectors of the economy and do not include the impact of trade with China or the withdrawal of production abroad.

The increased use of robots does not seem to increase employment in any group of workers, even among those who have a university education. Due to the fact that relatively few industrial robots are used in the US economy, the total loss of jobs from robotics is not very high: from 360 thousand to 670 thousand.

In comparison with this, from 1999 to 2011, Trade with China deprived America of about 2 million jobs.

But if the shock of Chinese trade is almost over, the era of robots is just beginning.

From the economic point of view, this should not be a problem. Automation will allow companies and consumers to save money, and send additional funds to purchase other goods and services. The labor resources released by technology must be transferred to work where people have a clear advantage.

But the same would have to happen with the horses. The use of tractors in agriculture has grown rapidly since the 1910s. In the 1950s, and during this period horses were massively superseded from the economy. But a small amount of work for horses still remained, as it is today.

The main problem lay in the movement of a huge number of horses displaced by technological inventions to places where they could still be used.

The market has corrected the process. As the demand for work traditionally performed by horses declined, the cost of horses decreased: by about 80% from 1910 to 1950. This fall slowed the pace of mechanization of agriculture, but only slightly.

Even at low prices there were not so many areas where ungulates were required.

Lower prices eventually led to the fact that for many owners the maintenance of horses became economically unprofitable. Horses, if you can say so, left the labor market through sale to meat or the production of glue. According to statistics, in 1918 there were 21 million working horses and mules in America, and in 1960 there were only 3 million workers.

Perhaps it is incorrect to compare people with horses, but the story is quite clear and instructive. Automation reduces the wages of workers: according to the authors of the study, one additional industrial robot per thousand workers reduces the salary across the economy by 0.5%.

The growth of real wages in many rich countries in the last two decades has been extremely unsatisfactory. The growth in employment was mainly in the services sector, primarily in low-paid retail and hospitality industries. Employment in these sectors has increased largely due to the abundance of cheap labor resources.

When there are not many vacancies, this airbag, although small, is capable of turning able-bodied people into loafers.

In order for people to receive a decent salary and not become only a service staff for those who have exceptional abilities, they should be able to compete with “smart” machines, and not passively observe how robots deprive them of their work, like horses when tractors appear.

As for society, it should react more resolutely to emerging problems, rather than behaving like owners of horses a century ago.