Words have meaning for dogs 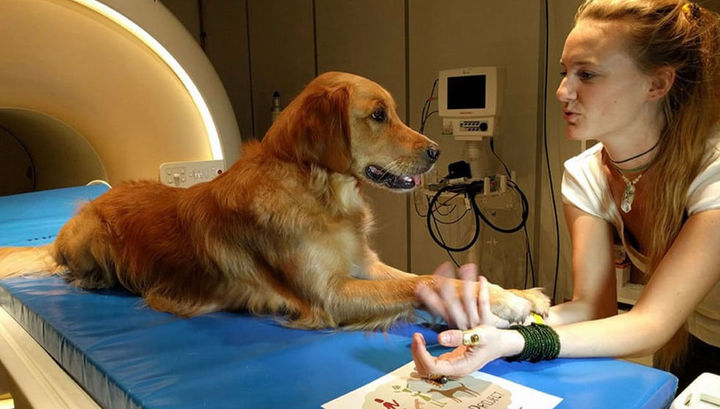 A new study by Hungarian scientists shows that the brains of dogs react to specific words and not just the tone of the statements of the person.

It was already known that the pet will feel the difference between the friendly tone of the owner and are unhappy, for example, in the case of another accident on the carpet. The scientist was curious to find out how dogs react it at a specific word.

Words are the basic building blocks of human language, in conversations, other species almost never occur. Bottlenose dolphins (dolphins) and zelenovatye passerine parrots create certain sounds to refer to names of relatives. By the way, recently scientists have found that dolphins even talk to their young until they are in the womb. Other animals, including chickens, Prairie dogs and some primates, emit unique warning signs that contain information about a specific predator.

Dogs such skills do not have: they don’t say any words, but some of them recognize more than 1000 human words. So, four-legged friends can understand their meaning, considered Hungarian scientists.

However, any scientific assumptions should always be checked. For this reason, the researcher Attila Andiks (Attila Andics and his colleagues from Eotvos Lorand University in Budapest scanned the brains of 13 dogs of four different breeds: border collie, Golden Retriever, Chinese crested dog and a German shepherd.

The researchers then analyzed the results of the scan. It turned out that regardless of the tone of the coach dog was treated with meaningful words in the left hemisphere of the brain (same as humans). However, the dog didn’t do the same when listening to the meaningless words. Words have meaning for dogs — concludes Andiks.

Moreover, dogs also pay attention to the intonation — this information is processed in the right hemisphere. Likewise works and the human brain. And in that moment, when the animals heard the words of praise, said in an approving tone, had started to activate another part of the brain’s pleasure center. That is the meaning of the words and intonation were mutually reinforcing.

Combine two types of information to interpret what they heard. People do the same, ” says Andiks.

Scientists with new information are beginning to better understand how the brains of dogs processes human speech. Pets have areas of the brain that interpretiruya voices, the differences in the sounds (in the left hemisphere) and analyze the sounds that convey emotions (right hemisphere).

Of course, if a person has a lot of experience with dogs, it is likely that this information will not be shocking for him. But a new study brings important scientific proof that Pets really know the difference between cookies and well done. It does not matter, as these words were spoken.

Insights, however, does not mean that dogs understand everything that we say, says Julia Hecht (Julie Hecht), which studies the behavior of dogs in the City University of new York. But our words and tone are not for dogs senseless, ” she adds.

Some researchers want to repeat the experiment on other Pets and wolves, which brought people to understand how deeply the ability to understand the man laid in the dogs and whether it depends on that, increased animal among the people or not.