Worms transmit information about the environment through generations 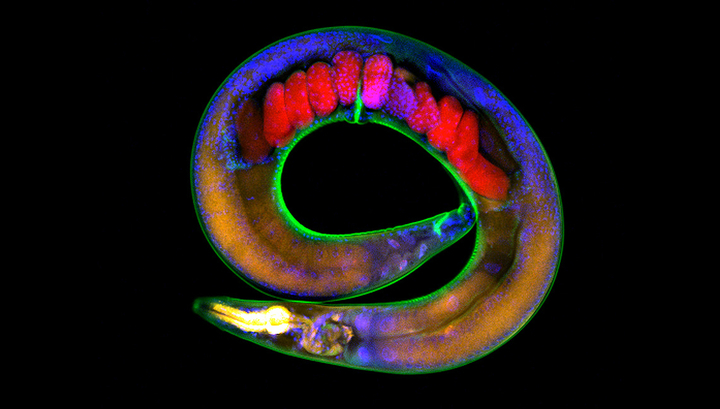 A group of Spanish scientists from the Center for Genomic Regulation, in collaboration with colleagues from other scientific centers, discovered that the effects of the environment are not only reflected in organisms, but are also inherited.

This fact has so far been proved only by the example of nematodes (or roundworms). Experts have established that the genes of these creatures retain and transmit certain information for at least 14 generations.

The team worked with the worm Caenorhabditis elegans – a representative of this species became the first multicellular organism whose genome was completely sequenced. The C.elegans genome has a length of approximately 100 million base pairs and contains approximately 20,000 genes; Most of them encode proteins.

Through genetic engineering, scientists have introduced into the genome of worms a chain of copies of a repeating gene that codes for a fluorescent protein. When activated, this gene contributed to the fact that the nematodes began to glow under ultraviolet light.

When worms were kept at a temperature of 20 degrees Celsius, the transgenes were less active, creating only a small amount of fluorescent protein. But when the temperature rises only five degrees, the nematodes begin to glow brightly under the ultraviolet.

What is interesting: when the temperature returned to the initial 20 degrees, the activity of the transgenes did not decrease. Hence, scientists concluded that the worms probably “remembered” the changes associated with the effects of heat.

Even more interesting was the fact that the increased level of transgene activity was transmitted for another seven generations, which were kept only at a temperature of 20 degrees Celsius.

In the following experiment, the team kept a warmer environment (all the same 25 degrees) for five generations of nematodes in a row. This led to an even more powerful work of transgenes, and they remained active for at least another 14 generations, which were constantly kept in a cooler temperature regime (20 degrees).

As the researchers note, this is the longest preservation of the so-called ecological memory of “generations” that has ever been observed in animals to date. A similar phenomenon was observed in fruit flies, other worms, as well as mammals (including humans), however such ecological memory, as a rule, did not last for so long – only several generations.

“Undoubtedly, we can transmit information about the environment from generation to generation,” says a member of the research group Ben Lehner (Ben Lehner).

“We do not know exactly why this is happening, but perhaps it is a form of biological advanced planning,” adds co-author Adam Klosin. The lifespan of worms is very short, therefore, probably, they convey memories of environmental conditions to help their descendants adapt to them, scientists believe.

In addition, the team found that repetitive areas of the unmodified genome of nematodes that are similar to transgenic chains behave identically. This probably indicates that the mechanism of ecological memory is also characteristic of the ordinary genome – not affected by the changes.