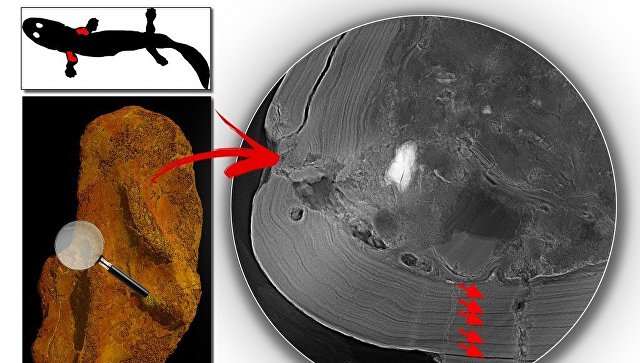 Scientists enlighten the remains of acanthostega, presumably the first four-legged animals on the planet, and found that all known specimens were in fact tadpoles that caused them to doubt that we know how to look these creatures in their adult life, according to a paper published in the journal Nature.

This discovery tells us that the mass grave of acanthostega really is a dead flock of young individuals, who lived, apparently, only in the water, and that there’s not a single adult. Now we are facing new questions – where did the adult acanthostega, met with young individuals and how they looked, said first Alberg (Per Ahlberg) from Uppsala University (Sweden).

Acanthostega (Acanthostega), lived on Earth 365 million years ago, today considered the first true tetrapods, amphibians creatures that was closer to its anatomy and way of life to the amphibians than to fish. Their remains were found in the middle 50 years of the last century, and before the opening tiktaalik famous paleontologist Neil Shubin in 2004, acanthostega was considered a transitional link between fish and animals.

A team of physicists and palaeontologists from Europe under the leadership of Albenga made an unusual discovery, which compels us to doubt it, studying the bone structure of several tens of acanthaster found one of the authors close to each other in Greenland in the late 1980s.

Bones of young and adult animals, as the scientists explain, differ markedly from each other in terms of flexibility, mineral composition and other properties, which today, paleontologists can determine the age of our ancestors, millions dead and hundreds of thousands of years ago, up to decades. As a rule, the bones of children and young individuals contain large amounts of cartilage and they are more flexible in structure than mineralized bones adults.

Following this idea, Alberg and his colleagues enlightened the bones they found of acanthostega with an x-ray emitter at the European synchrotron radiation facility in the French Grenoble. Watching how x-rays reflected from the molecules inside the fossils, the researchers obtained data on the three-dimensional structure of the bones of the front legs of acanthostega and were able to calculate a kind of growth rings within them.

As considered previously, the majority of paleontologists, in this mass grave contained the remains of only adults. In fact, all acanthostega from Greenland, judging by the fact that the bones are all fossils contain traces of growth were teenagers or just young individuals, whose growth hasn’t stopped yet.

This discovery was a big surprise to scientists because it questions how we imagine the adults of this genus is transitional between the animals and fish. The fact that we don’t yet know how to develop and grow these animals.

It’s possible that the problem is actually there, and that acanthostega looked as infants, same as adults. On the other hand, we cannot exclude the possibility that the development of acanthostega could be the type of frogs and many other amphibians, which in my childhood was quite similar to the adults. As I hope Alberg and his colleagues, they will be able to find in the near future adult acanthaster and find the answer to the question – are they really the first four-legged Land or not.