Zoologists have found that the extinct flightless giant stork could fly 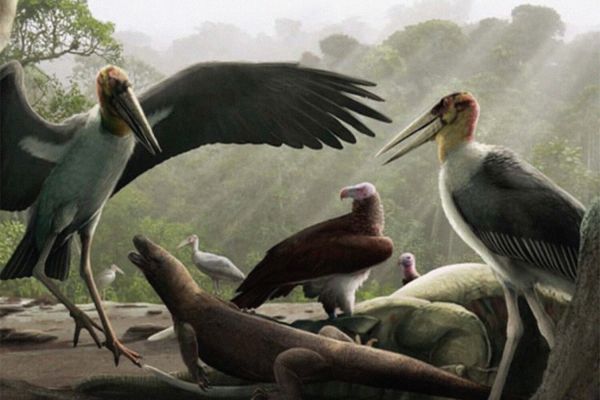 The extinct giant marabou from the island of Flores, which were considered flightless, were still capable of active flight. This conclusion was reached by paleontologists after analyzing the bones of these birds discovered over the past twelve years. In addition, the researchers had to abandon the idea that the Floresian marabou acquired outstanding size due to insular gigantism. As noted in an article for the journal Royal Society Open Science, it is more likely that they inherited this trait from ancestors on the continent. According to this hypothesis, the marabou from Flores were one of the last representatives of the evolutionary line of giant marabou.

In the late Pleistocene, a unique fauna formed on the Indonesian island of Flores, many of whose representatives were not found anywhere else in the world. The most famous of the species that lived here is the dwarf man Homo floresiensis, which is often called the hobbit. Under the conditions of island isolation, this descendant of H. erectus shrunk to one meter in height, and the brain size became the same as that of a chimpanzee.

Hobbits were associated with pygmy proboscis Stegodon florensis insularis, vultures from the genus Trigonoceps, as well as giant rats Papagomys armandvillei and Komodo monitor lizards (Varanus komodoensis). All these species, with the exception of rats and monitor lizards, disappeared about 50 thousand years ago. They probably fell victim to Homo sapiens (H. sapiens), who populated Flores around the same time.

In 2010, a team of paleontologists led by Hanneke J. M. Meijer from the Naturalis Museum in Leiden added a new species to the fossil fauna of Flores. In the sediments of the Liang Bua cave, the researchers found four bones of the wings and legs of a large bird. The analysis showed that they belonged to a giant marab stork 1.8 meters tall and weighing 16 kilograms. For comparison, modern African marabou (Leptoptilos crumenifer) grow up to 1.5 meters and weigh up to nine kilograms.

The extinct marabou was named L. robustus. It was assumed that it descended from a smaller ancestor originally from Southeast Asia, which, under the conditions of island isolation, increased in size and, judging by the thick wall of the tibia-tarsus, forgot how to fly. In addition, the researchers believed that the Floresian marabou was a predator that hunted small prey, chasing them on the ground.

In subsequent years, the remains of L. robustus aged 60–120 thousand years were found more than once in Liang Bua. As a result, the total number of skeletal elements belonging to them reached 43. Meyer and co-authors decided to study these finds in more detail in order to learn more about the body structure and biological features of the extinct marabou.

Contrary to the initial hypothesis that L. robustus could not fly, the bones of the wings and upper shoulder girdle of representatives of this species discovered after 2010 turned out to be well developed. They had normal proportions for flying birds and an osteological structure. Thus, the giant marabou from Flores was most likely capable of active flight. In the light of new information, the authors suggest that L. robustus was not a terrestrial carnivore, but fed on carrion, like modern marabou. Most likely, he soared in the sky on ascending air currents and looked out for the carcasses of dead or killed stegodons by monitor lizards.

Since the Floresian marabou could fly, its gigantic size is unlikely to be explained by insular gigantism. It is more likely that he inherited them from ancestors on the continent. According to a new hypothesis by Meyer and her colleagues, this species was related to other giant marabou species that existed from the Pliocene to the late Pleistocene. In particular, L. robustus is very similar in size and structure to L. falconeri, which lived in Africa and Eurasia in the Pliocene and early Pleistocene. Perhaps the Floresian marabou is even a direct descendant of L. falconeri. Another close relative of L. robustus may be the extinct giant marabou L. titan from the middle and late Pleistocene of Java.

The authors note that giant marabou were part of a savannah faunal community that also included proboscideans, hominids, and vultures. Representatives of all these groups penetrated the islands of Southeast Asia in the Pleistocene, when dry grassy landscapes spread here. These same islands have become a refuge for the last giant marabou. L. robustus on Flores and L. titan on Java managed to outlive relatives from the continent for a long time, which had already disappeared by the Middle Pleistocene. However, in the end, the island marabou also died out, becoming victims of Homo sapiens or climatic changes at the end of the Pleistocene.

Ornithologists have found that if not for humans, there would be at least 226 species of flightless birds living on Earth – almost four times more than today. They came to this conclusion after analyzing data on 581 species of birds that have become extinct since the beginning of the Late Pleistocene. Although human activities have reduced the overall diversity of birds by only five percent, among the extinct species there were a disproportionate number of those that have forgotten how to fly.