14 galaxies merged into one whole 1.5 billion years after the Big Bang 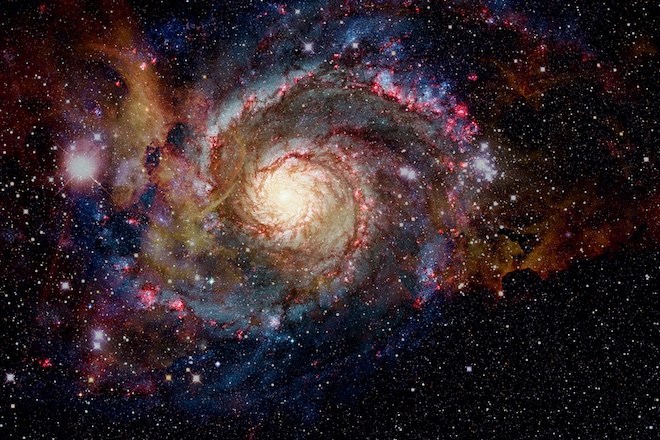 The first billions of years of the universe were fierce and restless. New data shows that at that time – just 1.5 billion years after the Big Bang launched this space experiment – 14 galaxies merged into one group and interacted one with another.

The galaxies, which were discovered through new information collected by the ALMA and APEX telescopes of the European Southern Observatory, turned out to be galaxies with a burst of star formation.

These types of galaxies form thousands of stars every year. Usual galaxies, like ours, form only a few stars a year.

“The lifetime of dust galaxies with a burst of star formation is considered relatively short, since they consume gas at an extraordinary speed. At any time in any corner of the universe, these galaxies are usually in the minority, “says Ivan Oteo, a member of the team that made the discovery. “Therefore, it is enigmatic to find numerous dusty galaxies with a burst of star formation that shine at the same time, and this remains to be understood.”

Initially, the researchers believed that the galactic accident occurred 3 billion years after the Big Bang, but new observations show that the universe was then only 1.5 billion years old.

Scientists believe that this galactic collision was a harbinger of the formation of galactic clusters, the largest formations in the universe.

At the same time, the researchers still do not know exactly how this grouping of galaxies was formed initially. “How this complex of galaxies has become so big so quickly is a mystery.” It was not created gradually billions of years, as astronomers expected, “says team member Tim Miller.

“This discovery provides an opportunity to learn how large galaxies came together to create giant galactic clusters.”

Scientists will focus on trying to find out as much as possible about these distant galaxies in order to determine how they formed in the young Universe.