14 geological features of Pluto were given official names 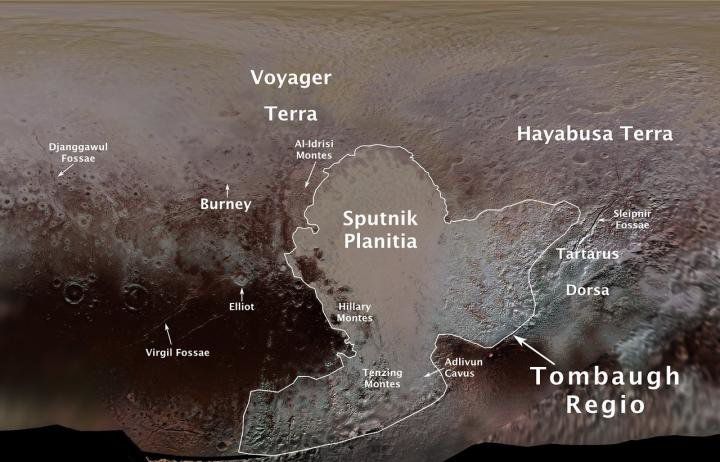 The International Astronomical Union (IAU) has given official names to 14 geological features of the surface of Pluto. These names are associated with the mythological underground world, the first space missions, as well as with scientists and engineers associated with Pluto and the Kuiper belt. It is worth noting that the official names for the geological features of Pluto IAU assigns for the first time.

Some of these approved IAU titles are listed below:

The Tombo region is named after Clyde Tombaugh (1906-1997), an American astronomer who discovered Pluto in 1930 from the Lowell Observatory, Arizona, USA.

The crater of Bernie is named in honor of Venice Bernie (1918-2009), who, as an 11-year-old schoolgirl, offered the name “Pluto” for a new planet discovered by Clyde Tombaugh. Later in her life she taught mathematics and economics.

The Plains of Sputnik are named after the spacecraft Sputnik-1, the first artificial satellite of the Earth launched by the Soviet Union and opened its space age in the history of mankind.

The Sleipnir hollow is named after a mighty, eight-horse from Scandinavian mythology, in which God Odin descended into the underworld.

The depression of Virgil is named after Virgil, one of the greatest Roman poets and fictitious conductor of Dante through Hell and Purgatory in the famous Divine Comedy.

It is currently expected to introduce new names for the geological features of Pluto for the IAU.