17 important space missions planned in the near future 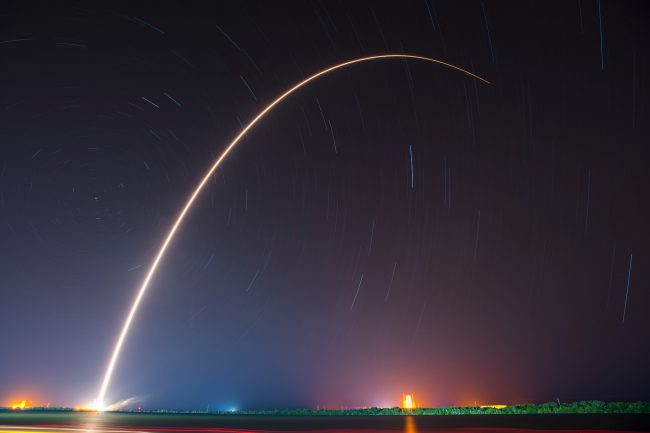 For a good half of the previous century, mankind managed to launch into the vast expanses of space many scientific instruments. With one single goal – it is better to understand this seemingly completely lifeless vacuum. From the first very grainy images of Mars, obtained within the space program “Mariner”, to the fantastic macro shooting of saturian satellites and rings of the gas giant – all these data provide invaluable information about how our solar system is arranged. And despite the fact that mankind recently lost one of the most useful space instruments, Saturian space station “Cassini”, in the next decade dozens of new space missions are waiting for us.

There will be so many that it’s not hard to get lost, that’s why we sorted out all of them and identified the most important and interesting ones. To implement most of them, scientists will begin within the next decade, and they definitely are worth your attention.

November 30th. The launch of Chang’e-5 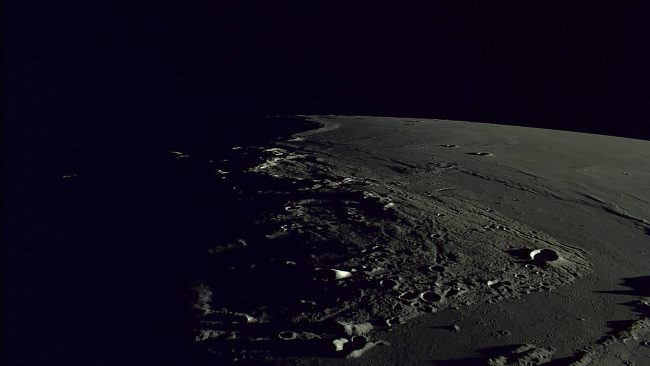 The Chinese National Space Administration (CNSA) is going to start the mission of the Chang’e-5 space mission in a month, the purpose of which is to send the spacecraft to the Moon. The main task is to perform a soft landing next to the lunar volcanic formation of Mons Rümker and collect samples of lunar regolith from a depth of about two meters below the surface of the satellite. Once the desired samples are received, they will be delivered to the spacecraft remaining in the orbit and then brought to Earth for analysis. 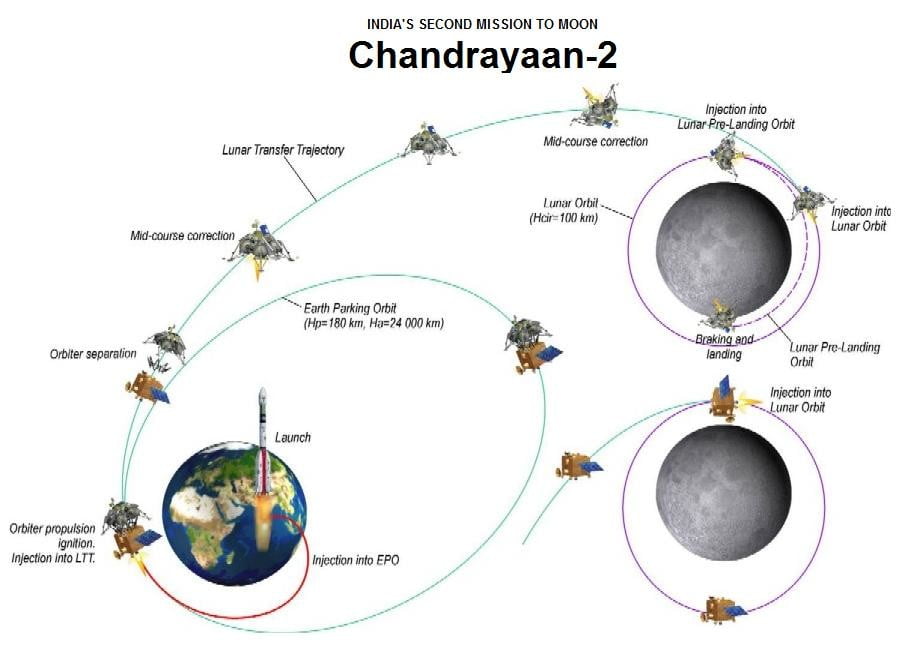 The Space Mission “Chandrayaan-2” was originally envisaged by the joint research program of the Indian Space Research Organization (ISRO) and the Russian Corporation Roskosmos, but later, as a result of changing some technical requirements from the Russian side, India decided to continue the mission on its own. The goal is to send two lunar rovers and one orbital spacecraft to the satellite of our planet. The task is to analyze the mineral composition of the satellite and study its exosphere. 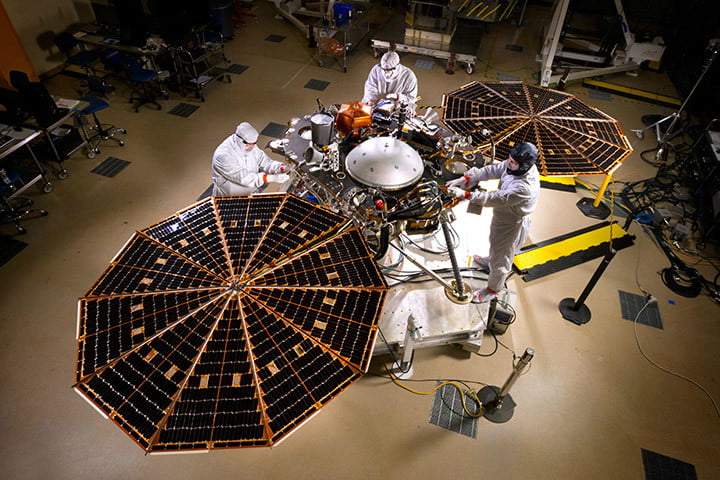 The purpose of sending the InSight lander (or Interior Exploration using Seismic Investigations, Geodesy and Heat Transport) to Mars is to study the inner composition of the Red Planet to get a better idea of ​​what processes shaped its internal structure many billions of years ago. The planned life of the device will be 720 days. 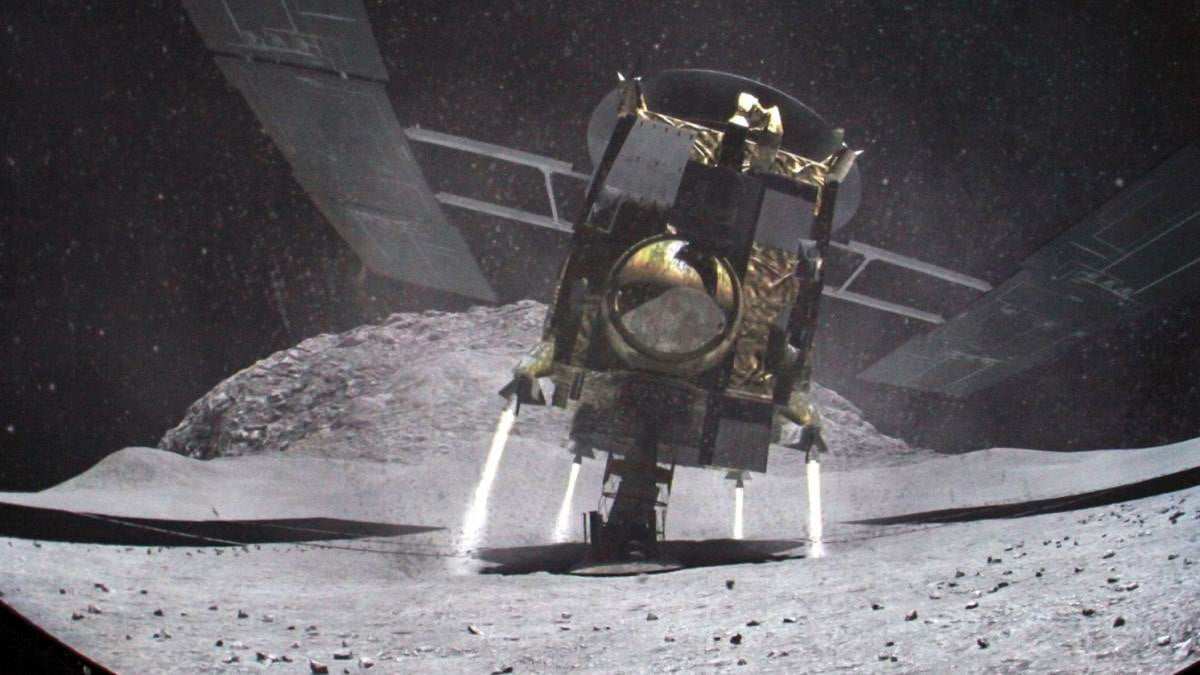 Hayabusa-1 station after landing on an asteroid

Mission of Hayabusa-2 of the Japanese Space Agency began in mid-2014. By the middle of 2018, the spacecraft will make a meeting with the asteroid Ryuga (formerly known as 1999 JU3), make a rapprochement with it, collect samples of particles of its ground and return them to Earth. Unlike the previous Hayabusa mission, Hayabusa-2 probe will be equipped with a special all-metal charge, which it will shoot into the asteroid, thereby forming a crater on it and lifting up particles of the inner soil of the asteroid. It is expected that these samples the spacecraft will bring to Earth by the end of 2020. 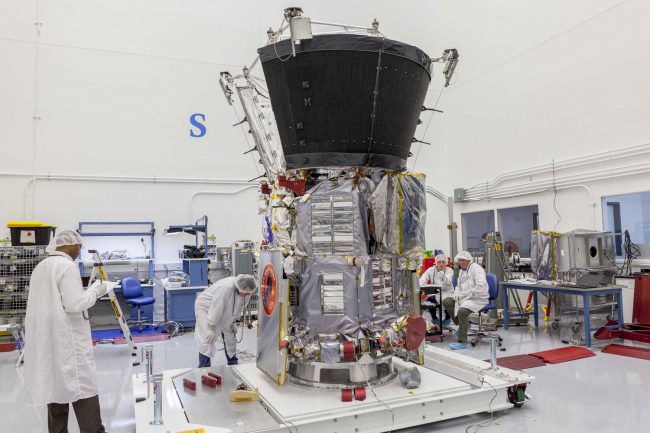 In the photo, the probe has just undergone preliminary tests under conditions simulating the operational

The so-called “Mission: touch the Sun”, or the program of the Solar Probe, aims to send a spacecraft to the surface of the Sun at a distance of up to ten solar radii, which is much closer than all the devices that ever went to the luminary. Such a close proximity to the star will allow the probe to collect unprecedented data on the activity of the light and, possibly, even create a forecast of the potential catastrophic weather phenomena that may be expected in the future based on this data.

October. The mission of BepiColombo 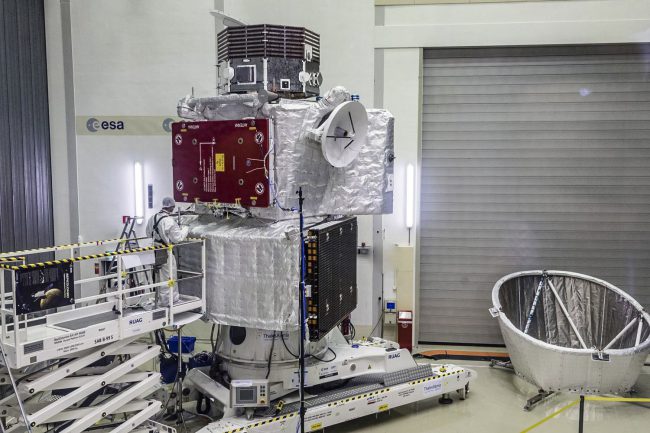 The BepiColombo interplanetary automatic space station is a joint project between the European Space Agency (EKA) and the Japan Aerospace Exploration Agency (JAXA) for the study of Mercury. The program will use two orbital spacecraft: Mercury Planetary Orbiter (MPO) and Mercury Magnetospheric Orbiter (MMO). Both devices were designed taking into account the need to withstand extreme temperatures above 350 degrees Celsius. To Mercury they will arrive by the end of 2025. 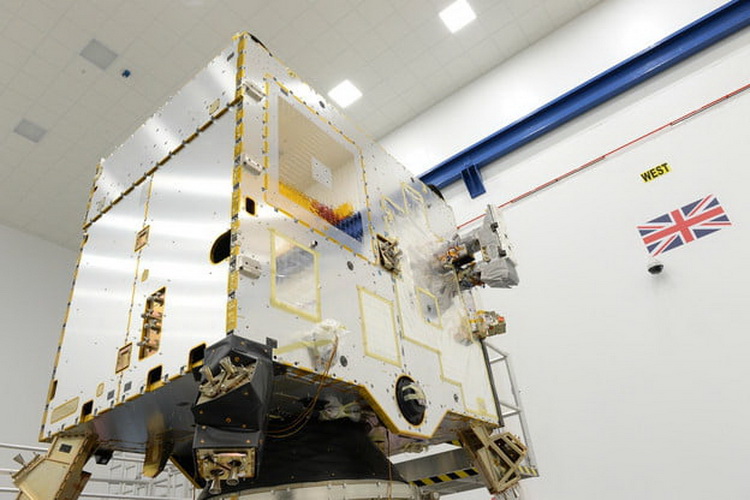 A joint project of the European Space Agency and NASA, whose mission is to bring a spacecraft to the elliptical space for an elliptical orbit around the Sun. Every five months this device will make one complete revolution around the Sun, being at a distance of 42 million kilometers from the star, that is, closer than Mercury is. The main mission of the mission will be to collect information on the solar heliosphere, by observing the plasma, waves and energy particles of the solar wind.

The date is not declared. Chang’e-4 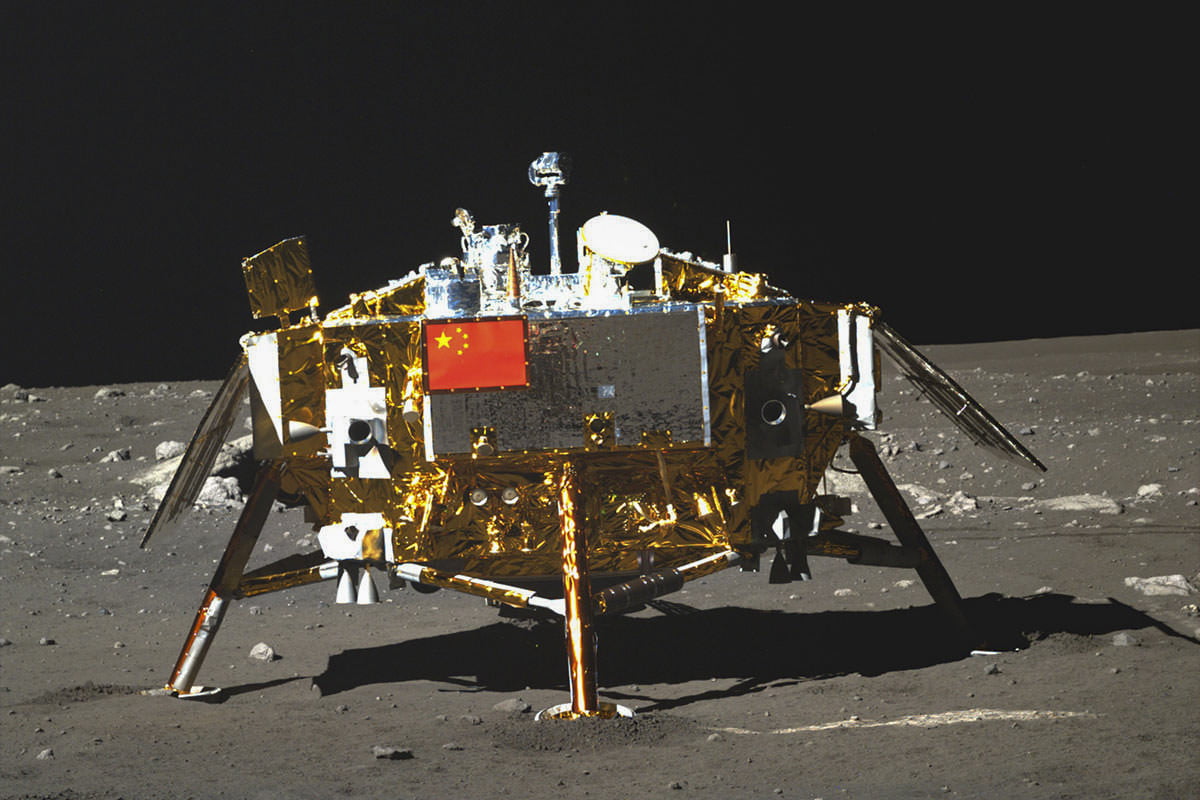 Chang’e-3 landing module on the surface of the Moon 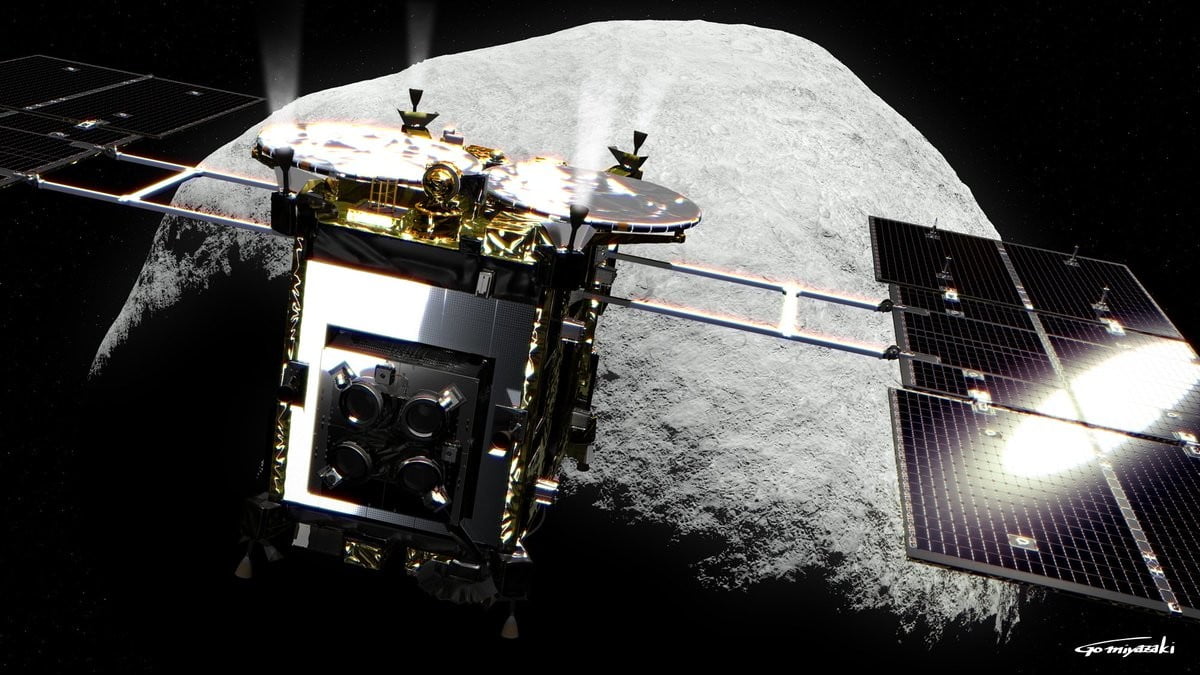 Already the aforementioned spacecraft Hayabusa-2 will arrive at the asteroid 1999 JU3, also known as Ryuga. 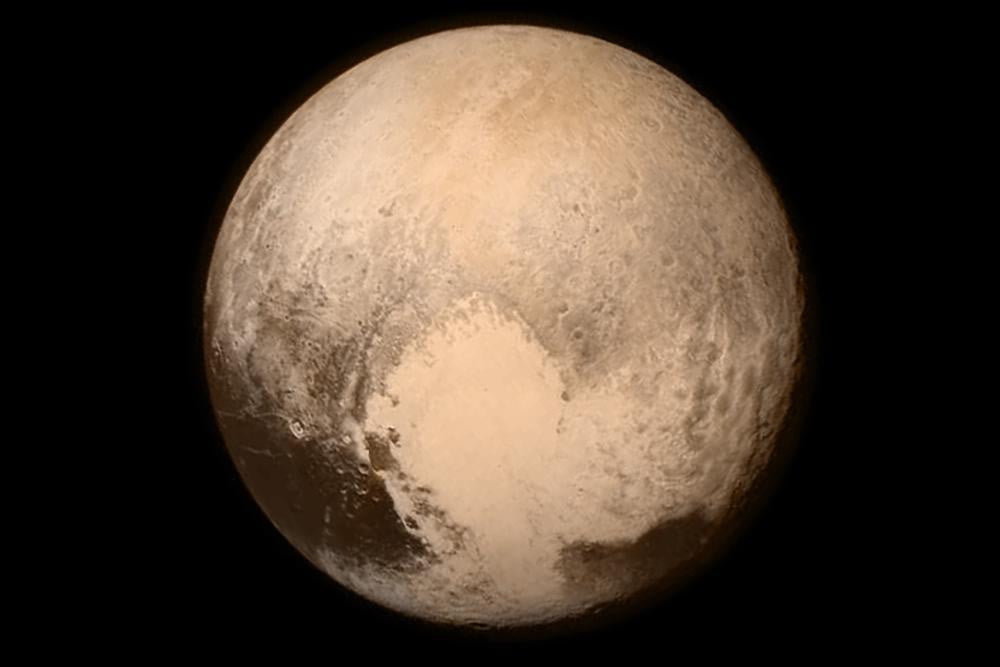 July 13, 2015 on the way to the trans-Neptune object 2014 MU69, the spacecraft “New Horizons” made a photograph of the hemisphere of Pluto of high quality

On the first day of the new year 2019, the “New Horizons” will fly over the Kuiper belt object 2014 MU69 and continue to carry out its expanded space mission. 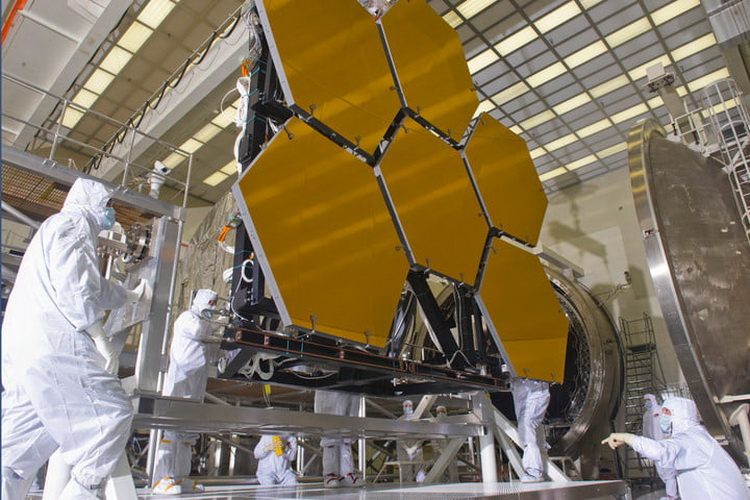 The James Webb telescope, which is more than just a replacement for the already obsolete Hubble telescope and equipped with a 6.5-meter modular mirror, will be launched from the Kourou cosmodrome in French Guiana in early 2019 (although there have been many launchings of the launch We will not be at all surprised if this time they post it too). One of the scientific tools of this space telescope has a lot of optical gates, allowing it to conduct simultaneous observation of the whole hundred different space objects. 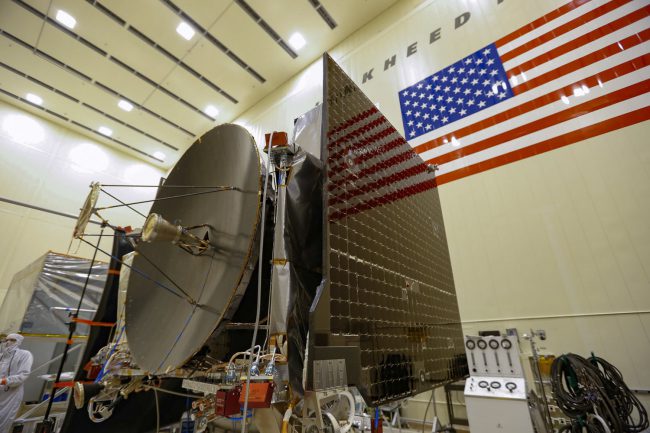 Spacecraft OSIRIS-Rex on tests in conditions simulating operational, in October 2015

The OSIRIS-Rex was launched into space in September 2016. In October 2019, he will reach the asteroid 101955 Bennu and collect samples of its soil. It is expected that the spacecraft will return to Earth with samples of a near-Earth space object in September 2023. 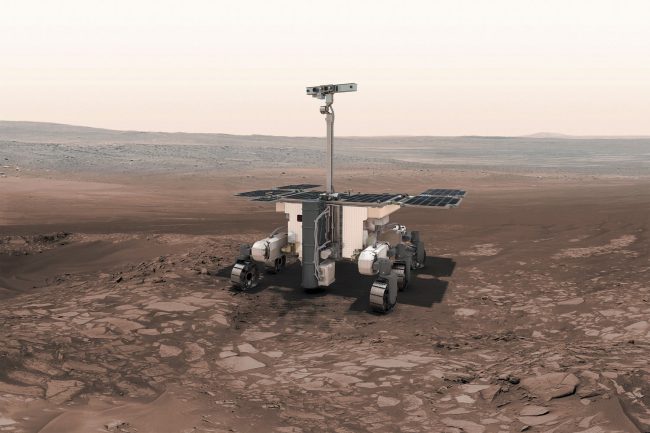 The incident with the “Skiaparelli” landing module showed very well that even with a successful launch and an unprecedented flight in general, even a second breakdown of the board computer of the landing module can lead to very sad consequences. The European Space Agency hopes that in the second part of the ExoMars 2020 program such surprises will be avoided.

Within the framework of this second part, a new rover will be delivered to the Red Planet, as well as a landing module. The main purpose of the mission is to search for evidence of extraterrestrial life. The rover will be equipped with a drill capable of deepening up to two meters below the surface, and the chemical laboratory on board will analyze the samples and try to determine the presence of organic compounds. 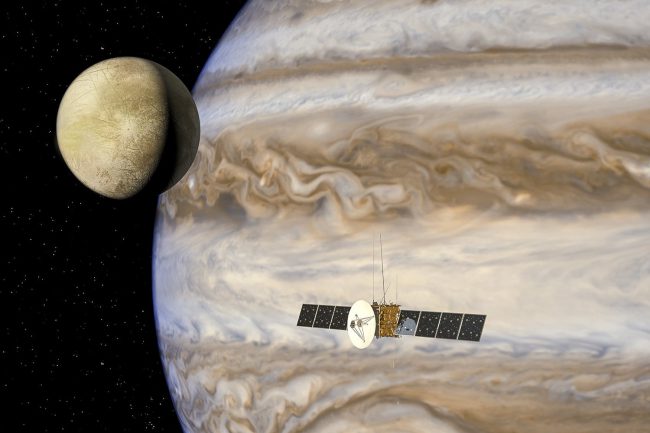 JUICE (or JUpiter ICy moons Explorer) is an automatic interplanetary station of the European Space Agency, the launch of which is scheduled for 2022, and the arrival to the Jupiter system – on the 2030th. The spacecraft will study the gas giant and its three largest satellites – Ganymede, Callisto and Europe – for three years.

The date is not declared. Psyche Project 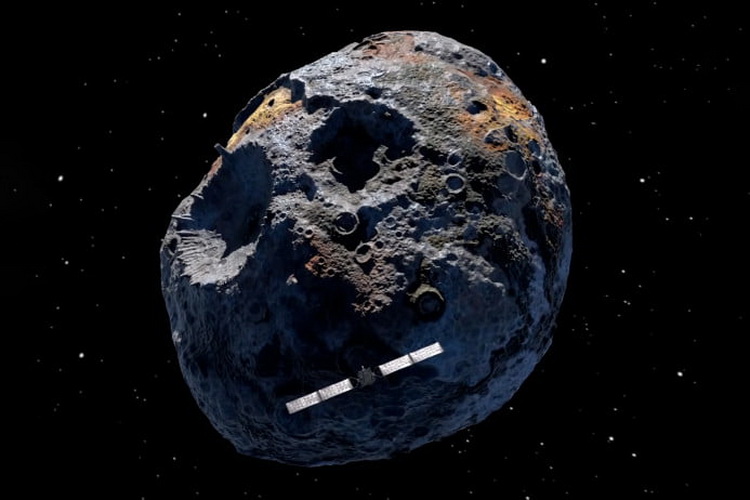 Orbital apparatus next to the massive asteroid belt Kuiper 16 Psyche in the artist’s view. Scientists believe that once this asteroid was the iron-nickel core of a certain planet

At the moment, it is assumed that the launch of the Psyche space mission to study a metal asteroid with the same name and wander in the asteroid belt between Mars and Jupiter will take place sometime in 2022. Among scientists, there is an opinion that Psyche may be the iron-nickel core of one of the failed protoplanets of our system. The study of this potential nucleus can give us a clearer understanding of how earth-class planets are being formed. 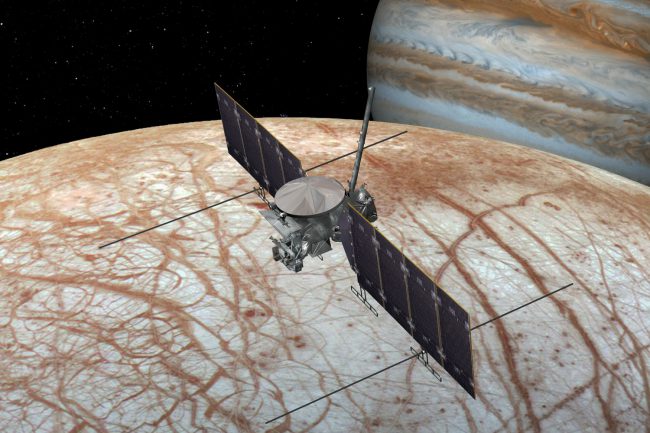 The program will be to study the gas giant Jupiter and in particular its satellite in Europe for signs of life. In total, it is expected that the spacecraft will make 45 full revolutions around the satellite, having thoroughly studied the surface and internal composition of this oceanic world. 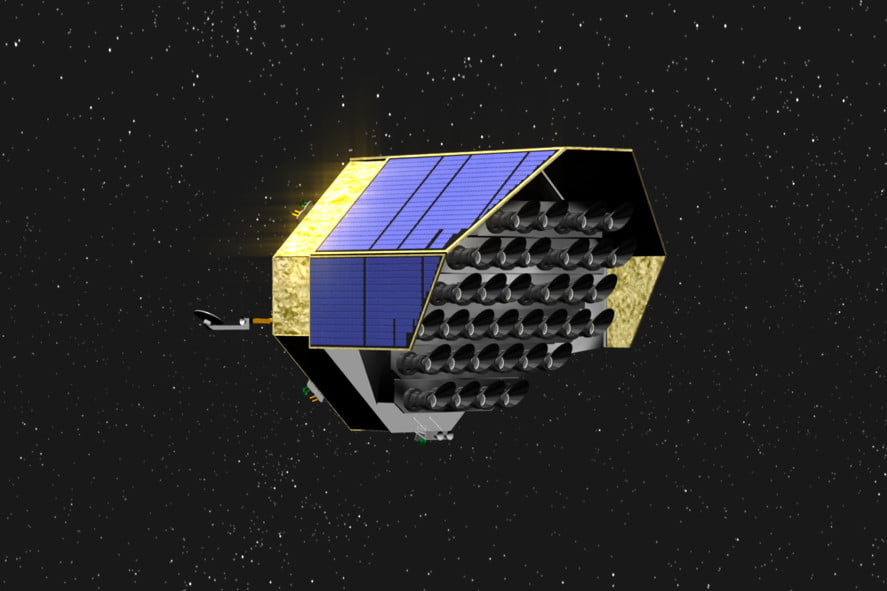 Planetary Transits and Oscillations (PLATO) is a space telescope planned by the European Space Agency that will detect and characterize exoplanets of all types and sizes in systems of yellow and orange dwarfs like our Sun with 24 photometers. PLATO will be engaged in the search for exoplanets, exclusively located in the so-called “Goldilocks zone”, or, more formally, the inhabited zone of stellar systems. The planned time of the telescope will be about six years. 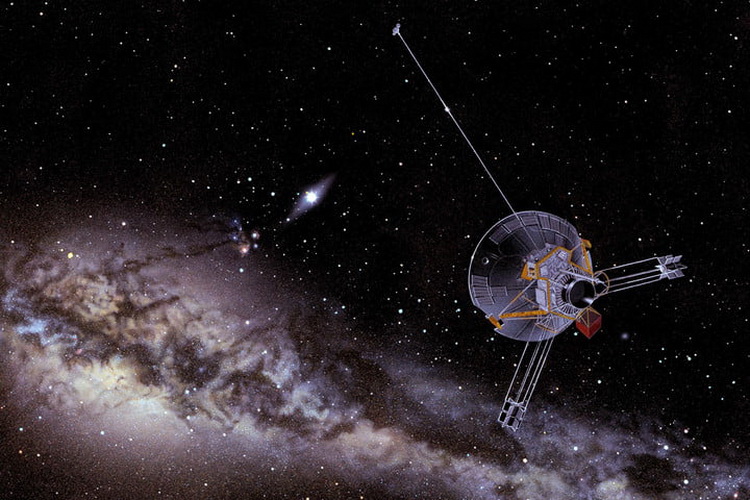 It was at this time that the Pioneer 11 space probe, launched in 1973, will pass near the Lambda Aquila star of the constellation Eagle in 4 million years.