4.5 billion years ago, Earth and Venus had similar atmospheres 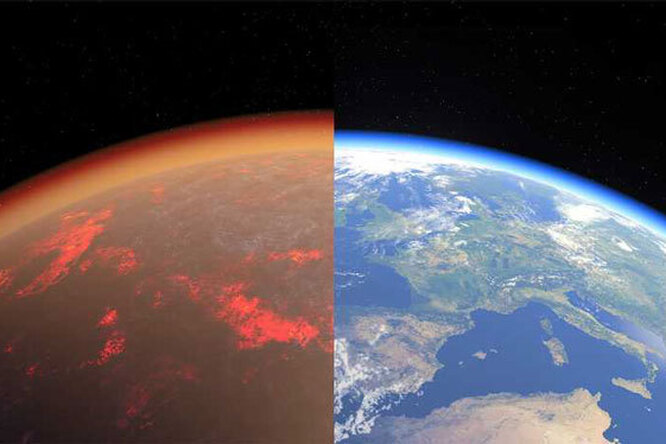 A new study by scientists from Switzerland showed that while the Earth’s surface was covered with an ocean of magma, gases rising from this seething sea may have created a toxic atmosphere almost identical to that now observed on Venus.

We used to think of Venus as a real hell, and the Earth as a paradise for the development of life. New research suggests that our “heavenly planet” was once a nightmare too

Experts speculate that the magma ocean was a consequence of the collision of a Mars-sized object with our planet. As the magma cooled, some compounds condensed and formed the atmosphere. To find out what this atmosphere would look like, the authors of the new work used a method called aerodynamic levitation. During the experiment, scientists created conditions similar to those of the Earth’s surface 4.5 billion years ago, in a special oven. To do this, they heated up a mixture of minerals and metals that were in suspension with a laser. The temperature reached 2000 ° C!

Since scientists do not know the composition of the early atmosphere of the Earth, they repeated this experiment several times, changing the composition of the gas jet. They compared each of the molten samples obtained with peridotites, that is, rocks that formed on Earth after the magma cooled down millions of years ago.

Once the laboratory and natural samples matched, the scientists were able to draw conclusions. The authors report that the Earth’s atmosphere was very dense, high in carbon dioxide and relatively little nitrogen. A similar composition can be observed on today’s Venus. Interestingly, the atmosphere of Mars has almost the same composition, but it is much thinner.

Scientists explain that Earth’s advantage over Mars and Venus lies in its size and the availability of water. The oceans have absorbed excess carbon dioxide, and the planet itself has enough mass to hold the atmosphere.