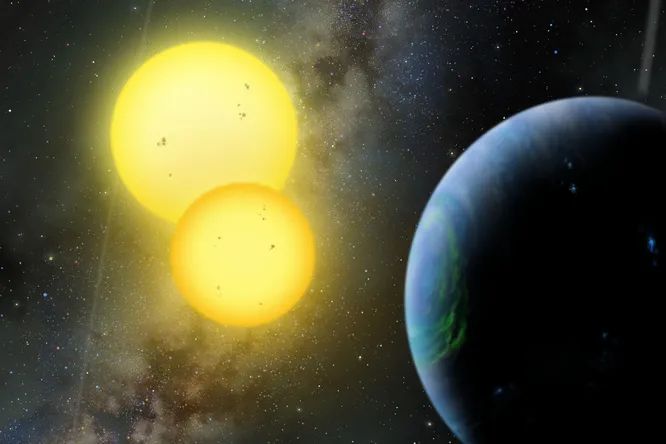 These are planets like Tatooine – the world we saw in Star Wars, with two suns in the sky.

We know only one scenario for the origin and development of life – earthly, but it cannot be the only one

As far as we know, life is only on our planet – a pale blue dot orbiting a lone star in the middle of the spiral arm of an unremarkable galaxy.

However, most of the stars in the Milky Way do not resemble the Sun. Up to 85% of star systems are composed of two stars. This naturally complicates the search for life, since potential habitability is easier to assess on planets near single stars. Binary star systems are additional gravitational interactions and double radiation that prevent microbes from getting out of the primordial silt.

Several years ago, astrophysicist Siegfried Eggle, now at the University of Illinois Urbana-Champaign and the University of Washington, developed an analytical framework for determining the habitable zones of binary stars.

Now he and his colleagues – Nikolaos Georgakarakos and Ian Dobbs-Dixon of New York University Abu Dhabi in the United Arab Emirates – have applied this method to the study of binary stellar systems with giant exoplanets.

“We used data collected by the Kepler Space Telescope, such as the mass of stars, their brightness, planetary location, and other parameters, to create a methodology for identifying systems with two suns where habitable terrestrial objects may be located,” Eggle explained.

The nine systems studied by the team are: Kepler-16, Kepler-34, Kepler-35, Kepler-38, Kepler-64, Kepler-413, Kepler-453, Kepler-1647, and Kepler-1661. All of these systems have been studied using analytical methods, which is much less time-consuming than simulations. “The analytical method requires almost no computation,” says Eggle.

Two of the nine systems were found to be particularly hazardous. Kepler 16 and Kepler 1647 have giant planets that are too poorly located – they do not have a stable habitable zone.

However, the five systems may indeed have habitable worlds. These are Kepler-34, Kepler-35, Kepler-38, Kepler-64 and Kepler-413, and Kepler-38 is a particularly promising system.