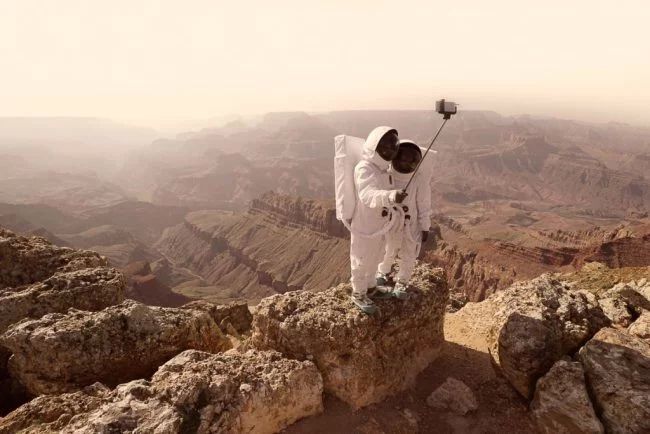 Mars is a planet of contrasts. Here, huge volcanoes are replaced by deep canyons, plains – sand dunes, and in deep craters of the planet still can contain water in one form or another. At least that’s what scientists think. As soon as the first Martian colony settles on the Red Planet, Mars promises to reveal its potential as one and the most interesting places for space tourism within the Solar System.

Today we will talk about the eight most “cult” places of Mars, which can become the main interest for space tourists of the future. 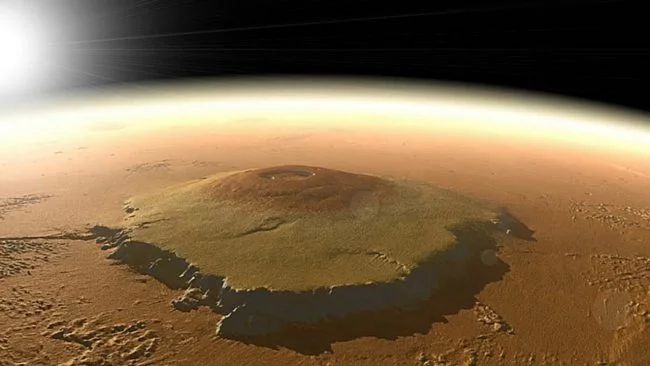 Highest in both absolute and relative altitude is the volcano of the solar system. The area of ​​the volcano located in the province of Farsida (equator of the planet) is almost equal to the area of ​​the American state of Arizona (more than 256 thousand square kilometers according to NASA). Its height is 26 kilometers, which makes it almost three times higher than the highest mountain on Earth – Everest, whose altitude above sea level is about 8.8 kilometers.

Olympus is a shield volcano. It was formed as a result of the slow erupting from the depths of the planet of lava masses that formed its slopes. For future colonists, the object is a rather attractive target for ascent, since its slope does not exceed 5%. At the top of the volcano is a huge depression (caldera) about 85 kilometers wide and 3 kilometers deep.

Volcanoes of the province of Farsida 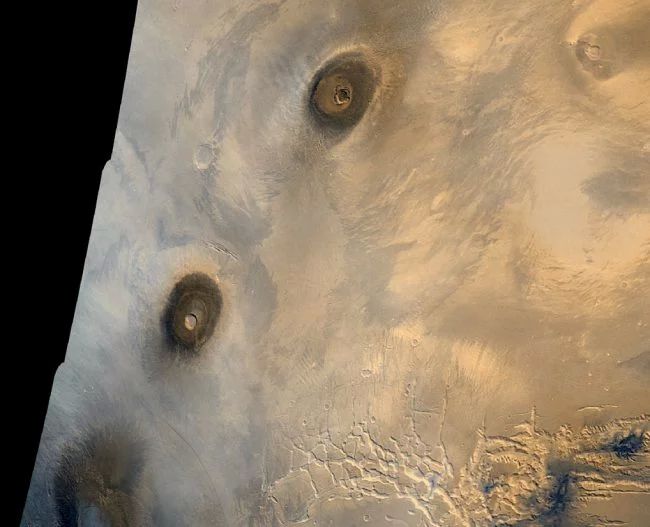 When climbing Olympus, it would be nice to look around and see some other volcanoes in the province of Farsida. Here, in an area of ​​about 30 million square kilometers, there are a total of 12 giant volcanoes. Like Olympus, these volcanoes in all respects are much higher than the volcanoes on Earth – all due to the reduced gravity that allows them to grow up. According to scientists, the last time these volcanoes erupted about 2 billion years ago, which is about half the entire history of Mars. 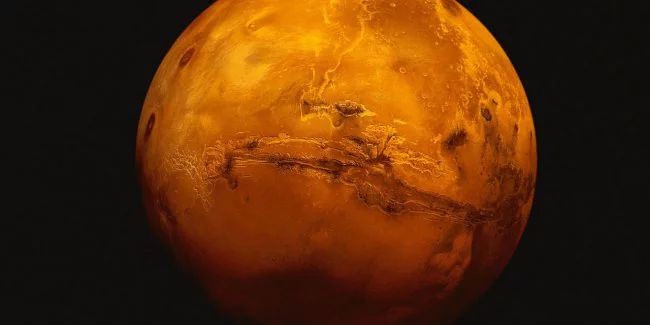 On Mars there are not only the largest volcanoes in the solar system, but also the largest canyons. According to NASA, the Mariner Valley stretches more than 4000 kilometers along the surface of Mars, mainly from east to west just below the equator. This is about four times the length of the Grand Canyon in the US, whose length is about 800 kilometers.

Scientists are not entirely sure how the Mariner Valley appeared, but there are several hypotheses on this score. So, according to the most popular of them, the valleys could appear after the formation of the volcanic region of Tarsida. Over time, when the cooling of the planet began, the solidified lava began to split into parts and eventually formed the shape of valleys.

North and South Pole of Mars 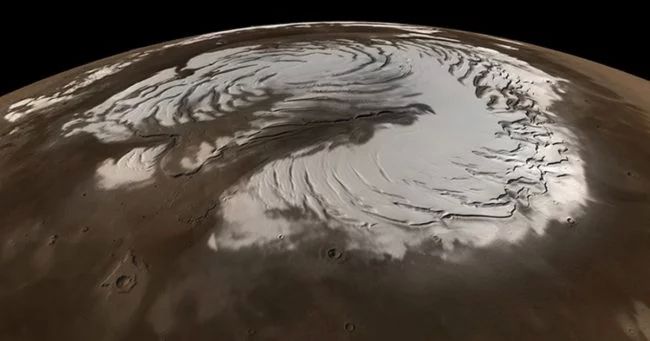 Mars has two ice caps on the poles, slightly different in composition. The study of the North Pole (in the image above) was conducted using the NASA Phoenix landing module, the South Pole was studied only by the orbital apparatuses of the same agency. According to NASA, during the winter season the temperature at the North and South poles of the planet becomes so low that carbon dioxide condenses from its atmosphere and settles on its surface in the form of ice.

Everything changes in the summer, when carbon dioxide is sublimated back into the atmosphere. At the same time, carbon dioxide disappears completely in the northern hemisphere, leaving behind frozen ice caps. Some of the carbon dioxide remains in the southern hemisphere. All these movements of the ice masses seriously affect the Martian climate, producing wind and other weather effects. 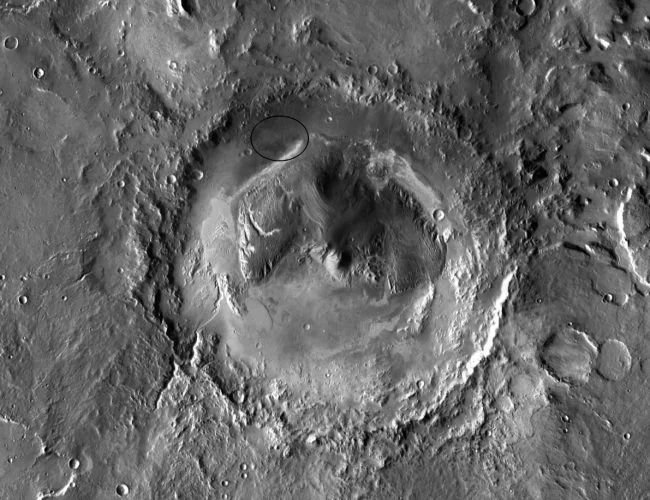 Became famous due to the landing in this area of ​​the rover “Curiosity” in 2012, the Gale crater is a potentially vast source of evidence of the presence of water on the Red Planet in the past. Just a few weeks after landing, “Curiosity” discovered the bed of an ancient dried Martian river. After months of his journey along the bottom of the crater of Gale, the rover found even more evidence in favor of the “raw” history of Mars. At the moment, the rover is located near the central peak of the Gale Crater Sharp Crater, which received its name in honor of the geologist Robert Sharpe. Here the rover is engaged in exploring geological features.

One of the most significant discoveries for “Curiosity” was the discovery of traces of complex organic molecules. In a study published in 2018, it was reported that the rover discovered particles of organic matter within the rock of 3.5 billion years old. Along with the announcement of the discovery of organic materials, scientists announced that “Curiosity” confirmed the seasonality of the methane concentration in the atmosphere of the planet. The methane found on Mars can indicate both the presence of a primitive biosphere on the Red Planet and the presence of geological processes. The future rover who will go to Mars for the replacement of “Curiosity” will certainly be able to figure this out. 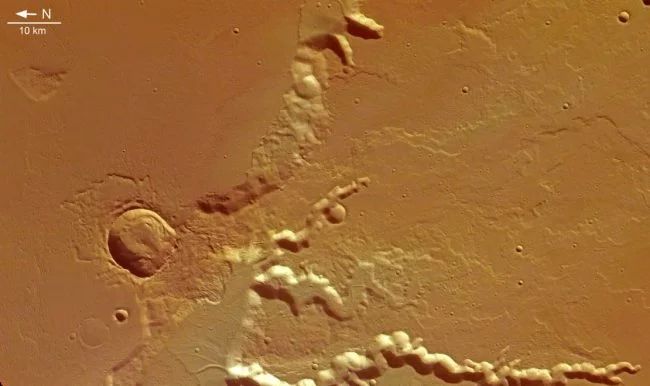 Medusae Fossae is one of the most interesting geological structures of Mars. Among conspirologists, there is an opinion that the structure is proof of the fall of a giant UFO to the Red Planet. However, the most likely explanation for the strange geological features are volcanic eruptions, occurring here more than 3 billion years ago. Scientists suggest that Medusae Fossae is a volcanic sediment. The largest volcanic deposit in the solar system. It is located next to the equator of the Red Planet and extends about eight thousand kilometers in length.

According to the findings of one of the studies conducted in 2018, an ancient catastrophe could have caused the appearance of liquid water bodies suitable for primitive life forms.

Strange lines on the slopes of the Hale Crater 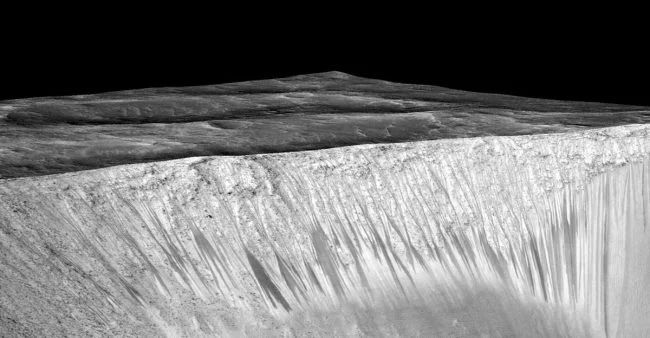 On some slopes of the Martian craters there are so-called “repeating elongated structures” – dark lines that appear during warm seasons. Scientists are still not exactly determined what exactly these lines are.

In the image above you can see the slope of the Hale crater with the manifested lines of unknown origin. In 2015, scientists from NASA told that the spectroscopy of the locality determined signs of the presence of salts here, which can be an indicator of the presence of liquid water. However, in later studies of “repeating elongated structures”, it has been suggested that structures on the surface of crater slopes can be formed by atmospheric water or by the movement of dry sand masses.

To get to the true nature of these then emerging, then disappearing lines, we will most likely have to get close to them. But here there is one snag. If these lines really live with alien microbes, then there is a risk of infection when visiting this area. While the NASA agency is trying to figure out how to investigate these lines near, without violating their own established planetary safety channels, future visitors and Mars colonists may be able to observe them from a distance, using the same binoculars. 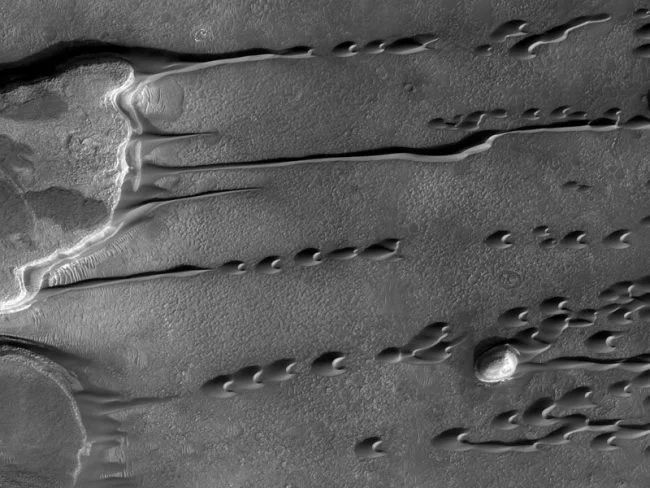 Since the atmosphere of the planet has become much thinner than it was before, and the water from the surface has evaporated, the current appearance of Mars is mainly formed under the influence of winds. And yet there were geological features on the planet that might hint at the “damp” history of Mars. Take at least the so-called “ghost dunes”, found near the region called the labyrinth of the Night (a huge complex of intersecting canyons), as well as the plains of Hellas. According to the researchers, in these regions once there were dunes up to several tens of meters. Later, their peaks were swept away or blurred either by movement of lava masses, as a result of volcanic activity on the planet, or under the influence of liquid water. Their existence is hinted only by “ghostly” grounds.

According to scientists, such old dunes perfectly demonstrate how the movement of air currents on ancient Mars occurred. Thanks to this, climatologists can understand what the environment of the Red Planet was in the past. Another “ghost dunes” are interesting because in their grounds, germs, protected from radiation and winds, can still be hidden, which otherwise would simply be blown off the surface of the planet. But these are only assumptions.