Astronomers see the shimmering shadow of a black hole 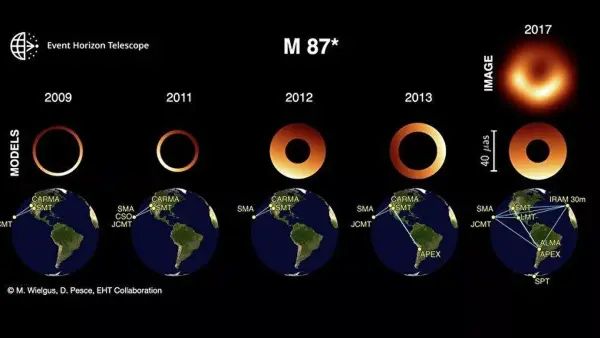 Scientists have raised the archival data of astronomical observations and found out that the shadow of the black hole M87 * changes over time – it flickers and shimmers. The study is published in the Astrophysical Journal.

In 2017, the Event Horizon Telescope (EHT) received the first ever photograph of a black hole in the history of astronomical observations. It captures the supermassive black hole M87 * in the center of the elliptical galaxy Messier 87 (M87) in the constellation Virgo.

General relativity predicts that superdense objects like black holes distort spacetime and heat up the surrounding material to the point where it starts to glow. The “highlighted” curved spacetime, according to the theory, gives an asymmetric shadow.

The 2017 image fully confirmed the theory. The crescent shadow M87 * with an uneven distribution of brightness is clearly visible on it.

Scientists from the EHT collaboration decided to raise the archived data of the Event Horizon Telescope for 2009-2013 and see how the shadow region behaved earlier.

The EHT consists of many radio telescopes around the world performing synchronized observations using very long baseline interferometry (VLBI). Together they form a virtual radio dish the size of the Earth, which provides extremely high resolution images.

The project started in 2009, but until 2012 the EHT array included only three radio telescopes, in 2013 there were four of them, and in 2017 – five. After that, the quality of the images improved dramatically, and scientists took the first picture of a black hole. This event was announced in April 2019.

Since the 2009-2013 data is much less detailed than the 2017 observations, the scientists used statistical modeling based on geometric assumptions to compare them.

“Analysis of the data shows that the orientation and fine structure of the ring changes over time. This provides the first insight into the dynamic structure of the accretion stream surrounding the event horizon,” said co-author Thomas Crichbaum in a press release from the German Max Planck Institute for Radio Astronomy. Krichbaum) “Exploring this area will be critical to better understanding how black holes coalesce with matter and launch relativistic jets.”

The authors explain the flickering by the fact that gas falling on a black hole heats up to billions of degrees, ionizes and becomes turbulent in the presence of magnetic fields. Since the flow of matter is turbulent, the brightness of the ring becomes flickering over time.

The researchers note that this hypothesis casts doubt on some theoretical models of accretion and further observations are needed to confirm it.

“Monitoring the temporal structure of M87 with EHT is a challenge that will keep us on our toes for the next several years. We are working on analyzing the 2018 data and preparing new observations in 2021,” concludes Anton Zensus, Director of the Max Institute for Radio Astronomy Planck and Chairman is the founder of the EHT Cooperation Council.

Scientists hope that expanding the capabilities of the EHT with the addition of new telescopes will provide a more detailed image of the shadow of the black hole M87 * and the innermost jet of the radio galaxy M87 in the future.