99% of the planets in the milky Way uninhabitable 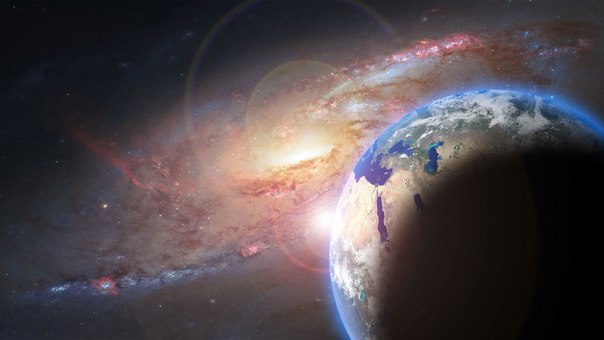 99.9999% of planets in the milky Way are either very young for the origin of life, or is unfit for its existence.

Astronomers from Austria, Serbia and France conducted a simulation of the fate of potentially habitable planets around the stars, located in different parts of our Galaxy. The researchers came to an unexpected conclusion: the Solar system because of its unusual location is one of the oldest planetary systems in which the possible existence of complex life forms. The vast majority of other potentially habitable planets in the Galaxy where younger and if life exists, then it is less developed. The corresponding article was published in the Monthly Notices of the Royal Astronomical Society, and with its Preprint available on the website of Cornell University.

The authors conducted a complex simulation of star formation in a spiral galaxy identical to the milky Way. In the model of scientists “replayed” the first 10 billion years of the history of this galaxy (that’s the estimated age and the milky Way). How they managed to figure out a lot of stars are formed in regions of the galactic nucleus and its vicinity (up to 20 thousand light years). Almost all their planets life can exist, but is almost guaranteed to not reach the stage of complex surface forms.

Closer to the center of the stars and the distance between them is many times less than in the solar vicinity. Due to frequent explosions of nearby supernovae, the hypothetical biosphere of planets in the habitable zone is subjected to systematic the strongest impacts of ionizing radiation. In addition, the ozone layer on earth-like planets long destroyed by the supernova explosion, if the explosion had happened closer than a few dozen light years.

Another hazard for life on planets near stars in the center of the galaxy are systematically close the passage of stars at a distance of less than 15 billion kilometers from each other. Such convergence with high probability destabilisateur the orbits of the planets of both systems, moving them from areas inhabited in uninhabited and on the contrary. Also dangerous approach seriously disturb the orbits of many large asteroids and comets, threatening a massive heavy bombardment of inhabited exoplanets.

All this means that the history of evolution of life on planets around stars near the center of the Galaxy will be a continuous chain of mass extinctions. The authors believe that part of this situation is true for the Earth, which is only 26,000 light-years from the galactic center. It is a safe distance, precluding the systematic mass extinction for astronomical reasons, goes much further — 30-50 thousand light-years from the center.

However, from this safe distance takes the action of another factor. According to the calculations of astronomers, in the periphery, in a kind of “galactic habitable zone,” the average age of systems with potentially habitable planets is just three billion years. When the Earth was in such age, it only began to appear multicellular. This means that although theoretically most of the civilizations of the Galaxy should appear exactly on its periphery, the time has simply come.

When you try to calculate, what are the chances earth options — that is, the existence of potentially habitable planet in 4-5 billion years, only 26 000 light years from the center, scientists found that it is relatively low. And while talking about specific numbers is difficult, it is, apparently, less than one percent. Besides, this range is not excluded systematic mass extinction that hinder the development of complex life forms.

In this regard, the authors propose to focus the search for traces of extraterrestrial life in the regions lying further from galactic center than our Solar system. The most likely object of search of this kind they consider primitive bacterial form, giving marks for technical activities. This means that projects such as SETI are overly optimistic to the level of development of extraterrestrial life. If we are one of the oldest inhabited planets in our region of the Galaxy, the chances of registration of radio signals close neighbors may not be.