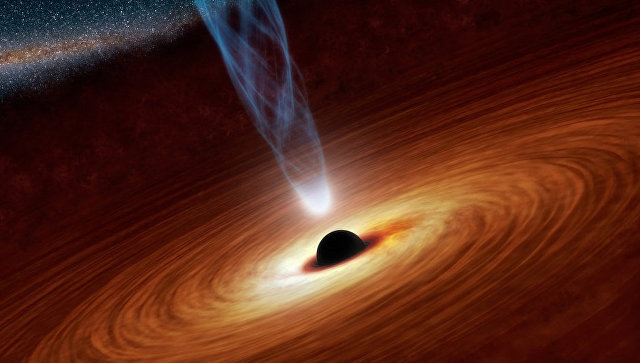 Astrophysicists found in the vicinity of a supermassive black hole in the center of the Milky Way some very strange objects, similar to clouds of gas, but behaving like stars. Scientists told about this at the annual meeting of the American Astronomical Society, held this week in Denver.

“If the objects G1 and G2 and their cousins ​​were simple gas clouds, they would have long ago disintegrated, we assume that they are actually” blown “stars, their matter has become so thin that a black hole can “suck” their matter in the course of their encounters, “explains Mark Morris from the University of California in Los Angeles, USA.

In the spring of 2011, the German astronomer Reinhard Hentsel discovered a small cloud of hot gas G2, which moved at great speed to the supermassive black hole Sgr A * in the center of our galaxy. Some scientists assumed that this cloud contained a dull star, while others denied this possibility.

Because of the “stretched” cloud and the relativistic effects existing in the vicinity of the black hole, astronomers had the opportunity to observe the “dinner” of the black hole Sgr A * for a whole year. During this time, they managed to find out that there is no star inside G2. Two facts support this: the brightness of the cloud did not change during the first months of its flight around the black hole and its structure remained fairly homogeneous, which would be impossible if there was a star in it.

In mid-November 2014, astronomers found, based on indirect evidence, that the cloud somehow managed to survive the encounter with the black hole, not to break apart and not cause fireworks, thus depriving astronomers of the predicted spectacle of brightness in a hundred Suns. This led many scientists to change their minds and conclude that inside G2 lies a star or some other dense object that kept it from decaying.

Morris and his colleagues have received new evidence to support the “stellar” origin of these strange clouds of gas, opening three more such structures, observing the surroundings of Sgr A * using the tools of the Keck Observatory in the Hawaiian Islands.

Morris notes that initially his team was solving another problem – scientists were trying to understand how the dust is distributed around the black hole and how it moves around it. To do this, they created a program that helped them decipher the spectrometer data and allowed them to “glimpse” inside the G2 cloud and its “older brother”, the G1 cloud discovered in 2004, and to study other dust accumulations.

To the great surprise of astrophysicists, these observations showed that Sgr A * does not surround two, but at least five similar objects, arranged approximately equally and behaving in a similar way. Three new clouds, named G3, G4 and G5, are noticeably farther from the black hole than G1 and G2, and their next approach to the black hole will occur in about 20-40 years.

How do such structures arise? Morris and his colleagues suggest that they are born as a result of the merger of binary stars that are close to a dangerous distance from a black hole. Its attraction forces them to collide with each other and merge into one large object.

“The main consequence of such collisions is that the new star” swells “heavily under the impact of collision energy, it remains bloated for a very long time, several million years, until the cloud cools down and turns into a normal star. Now it remains for us to find out how they initially become so big, “concludes Morris.