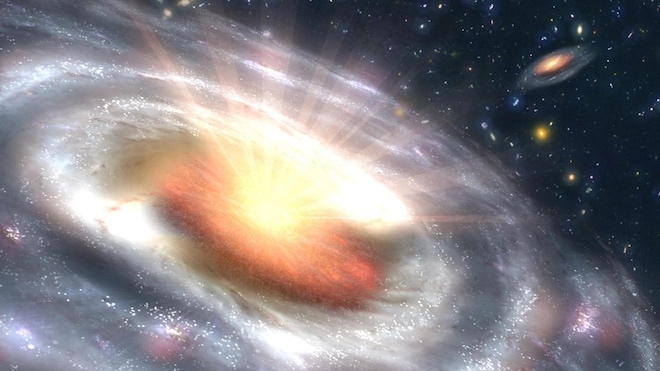 Even a black hole can get hungry. Astronomers have discovered a black hole that grows faster than any other in the universe. If the Sun fell into this incredibly dense space object, a black hole would take only two days to absorb it.

The supermassive black hole, which is located billions of light years from us, is equal in mass to 20 Suns and grows by 1% every 1 million years.

“This black hole grows so fast that it shines thousands of times brighter than the rest of the galaxy because of the gases it sucks in every day. They cause friction and heat, “says lead author Christian Wolfe.

“If this monster was in the center of the Milky Way, it would be 10 times brighter than the full Moon.” But this shining black hole, also called a quasar, would make the Earth uninhabitable due to X-rays.

“Large and fast growing black holes are extremely rare, and we searched for them with the help of SkyMapper for several months,” Wolfe says. “The European Space Agency’s” Gaia “satellite, which measures tiny motions of stellar objects, helped us find this supermassive black hole.”

Now scientists are hunting for another black hole, the appetite of which can be even greater. Such an object will make it possible to learn more about the inner workings of the Universe several billion years after its formation.