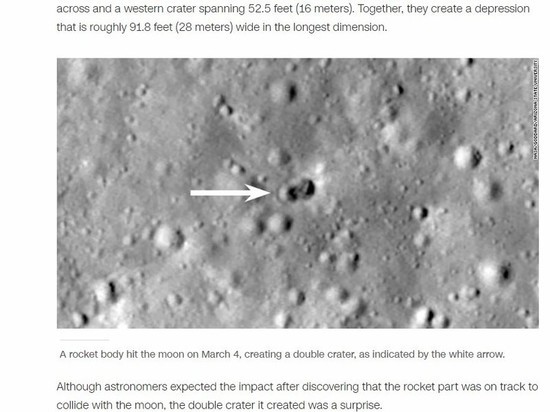 A new double crater formed on the Moon after the rocket body collided with its surface on March 4. It is reported by CNN on June 28.

New images provided by NASA’s Lunar Reconnaissance Orbiter, which has been orbiting the moon since 2009, have revealed the location of the unusual crater.

The double crater came as a surprise to astronomers.

Typically, spent rockets have the most mass at their engine end, because the rest of the rocket is basically an empty fuel tank. But the double crater suggests that this object had large masses at both ends when it hit the moon.

The exact origin of the rocket body, a piece of space debris that has been flying around for years, is unclear, so the double crater could help astronomers determine what it was.

The Moon lacks a protective atmosphere, so it is littered with craters formed when objects like asteroids regularly crash into the surface.

This was the first case known to experts of an unintentional fall of a piece of space debris on the surface of the Moon. But the craters were also formed as a result of the deliberate landing of a spacecraft on the moon.