A giant exoplanet has a helium tail. 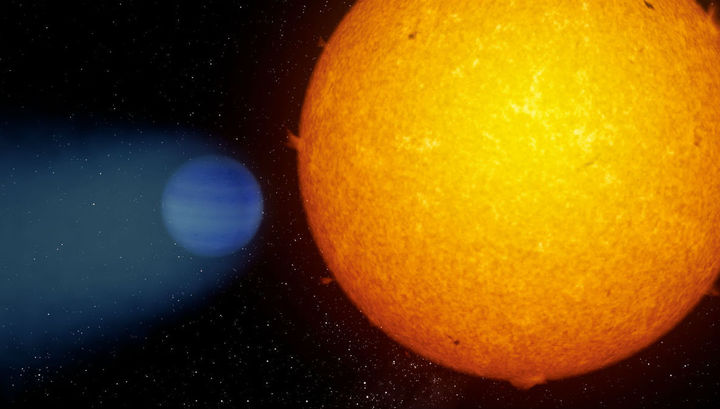 Astronomers have found a spectacular tail from a volatile atmosphere in a famous giant planet. Perhaps the discovery will help to understand the mechanisms of the formation of earth-like worlds.

The scientific article with the results of the study was published in the journal Science by a group led by Lisa Nortmann of the Canary Institute of Astrophysics.

The authors used the CARMENES spectrograph mounted on the 3.5-meter telescope at the Calar Alto Observatory in Spain. The main purpose of this tool is to search for Earth-like planets in the habitable zone of red dwarfs. However, this time the researchers used it for another task. They were interested in helium, which is found in the atmospheres of exoplanets.

Helium is the second most common element in the Universe after hydrogen. He is abundant in the composition of stars and such planets as Jupiter and Saturn. It is natural to assume that it will occur frequently on giant exoplanets as well. Nevertheless, this element in the atmospheres of distant worlds was discovered quite recently.

First of all, this is HD 189733b, a world known for incredibly strong winds and silicate snow.

Secondly, this is HD 209458b – one of the first exoplanets directly observed in telescopes (by the way, it was on it that Russian scientists tested their own way of measuring the magnetic field of distant planets).

In addition, it is the “burning hell” KELT-9b, in the atmosphere of which even titanium and iron break up into atoms.

The fourth in the list was WASP-69b. It was she who turned out to be a “tail”, which we will now describe in more detail. We add that all the listed worlds are hot Jupiter.

Their company is the warm neptune GJ 436b, which also has a tail, but from hydrogen. 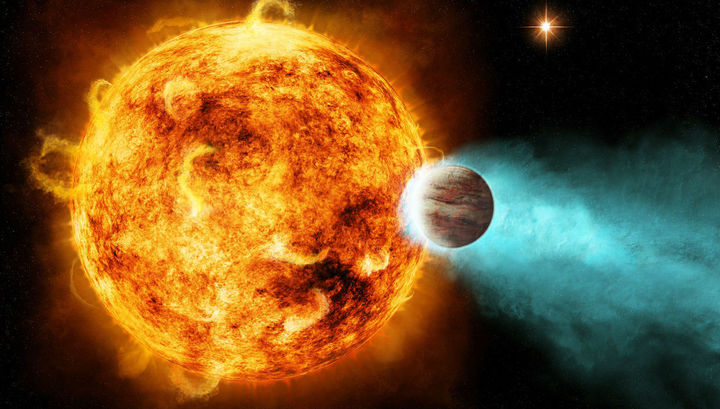 Planets were observed during transit (passage of the world between the parent star and the earth observer, that is, a kind of eclipse). In this case, the rays of the stars shone through the atmosphere of a distant world, and the gases contained in it absorbed radiation at certain wavelengths. According to the absorption spectrum, scientists determine which substances are present in the atmosphere of distant worlds. In this case, the authors were interested in the mark of 1083 nanometers (near infrared range), or the helium absorption line.

Contrary to experts’ forecasts, “solar gas” was found only in the atmosphere of the planets HD 189733b and WASP-69b. The latter was particularly impressed by the experts.

“We observed a strong and long-lasting darkening of starlight in the spectral region where helium gas absorbs light,” says Northmann. “The unusually long duration of this absorption allows us to conclude that there is a tail.”

We are talking about a cloud of helium, extended in the direction “from the star”. Apparently, the ultraviolet radiation of the local sun heats the gas and causes it to leave the atmosphere of the planet. The speed of the particles should reach several kilometers per second. These figures are fully confirmed by observations.

Note that earlier the atmospheric leakage from exoplanets was studied mainly with the help of the Lyman-alpha hydrogen absorption line, which lies in the ultraviolet range. Such radiation can be observed only in orbital telescopes. Now the authors have demonstrated that helium is also a promising indicator of such a process.

In addition, the team used data from the XMM-Newton space X-ray observatory to investigate the parent stars of their wards. It turned out that two planets, in the atmospheres of which helium was detected, receive the greatest amount of X-ray and extreme ultraviolet radiation from their luminaries. Astronomers are not yet ready to state with certainty the reason for this phenomenon.

“This is the first big step towards finding out how exoplanet atmospheres evolve over time. And this may affect [our estimates] the mass and radius distributions of the super earth and mini Neptunov populations,” says co-author Enric Palle, also from the Canary Institute astrophysics.

Let us explain that the researcher is referring to one of the hypothetical formation mechanisms of small, including earth-like, planets. According to this version, worlds that are very close to their star are the nuclei of giant planets, whose gas has escaped under the action of the radiation of a star.