A large cold spot was found on Jupiter 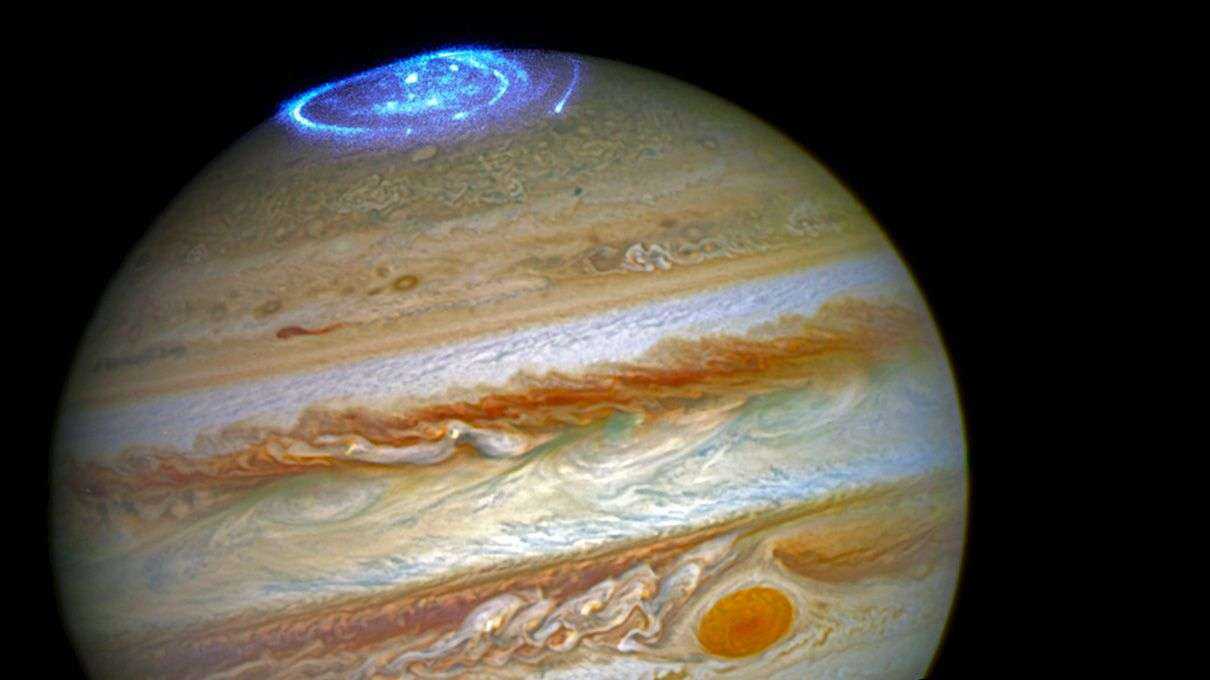 On the gas giant Jupiter there are no craters, no mountains. However, some structures in its dense atmosphere remain stable for many years. The most famous among them is the Great Red Spot, a hurricane that reaches a length of 40 thousand km: it is believed that it has been active for more than 350 years. A new spot in the Jovian atmosphere is ready to argue with it in sizes that are estimated at 24,000 km along the parallels of the planet and 12,000 along the meridians.

The spot is located at the level of the Jupiter thermosphere, the temperature here is 200 K lower than in the atmosphere. A large cold spot is much more mobile than a slowly changing large red, it changes both shape and size in a time of the order of weeks, or even days. However, it also disappears for a short while: the astronomer from the University of Leicester Tom Stollard (Tom Stallard) and his colleagues from the United Kingdom and the United States studied the data of observations for 15 years – the stain on them appeared again and again. This is reported by scientists in an article published by the journal Geophysical Research Letters.

It is assumed that a large cold spot arises under the influence of powerful auroras in the atmosphere of Jupiter. In this case, additional energy is released in it, which in the form of a “heat wave” covers the entire planet. At the same time, in the uppermost layers of the thermosphere, these processes lead to the appearance of a cold spot, which is gradually dissipated by a “wave of cold”. However, this has not happened yet, vortices can also appear in it, causing darkening in the images of the atmosphere of Jupiter.

Stollard and his co-authors made observations using the VLT telescope, and also used the IRTF IR telescope archive data for 1995-2000. Corresponding to the Great cold spot, the darkened area in the upper layers of the Jovian atmosphere was found everywhere. “What is surprising,” adds Tom Stollard, “unlike the weather systems on Earth, the Great Cold Spot remains in the same place for at least 15 years. This makes it look like a weather system lower in Jupiter’s atmosphere, such as the Great Red Spot. ”

It is worth noting that the stability and stable position of the Great Cold Spot will not be so surprising if you recall the two differences between the auroras of Jupiter and the Earth. In our atmosphere, they arise under the action of solar particles, when the activity of the star is sufficiently large. On Jupiter, the radiance is associated with its satellites and, above all, with Io, the most volcanically active body of the solar system. Their movement excites currents in the planet’s magnetosphere, and also provides the planet with constant “replenishment” by ions and almost no decaying, strong auroras.

In addition, the energy of this phenomenon on Earth is easily dissipated, but in the dense atmosphere of the gas giant it lingers for a long time at high latitudes. As a result, the impact of auroras on the polar regions of Jupiter is both stable and strong.