A large network structure inside the Orion Nebula 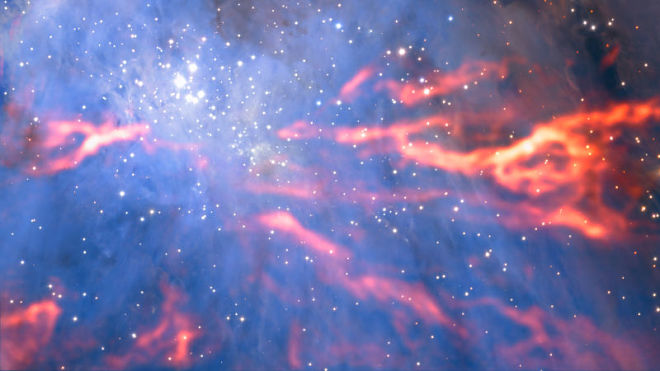 Probably the most recognizable constellation of the night sky is the constellation Orion, named after a hunter from ancient Greek myths. Three bright balls, lined up in a row, denote the belt of the figure. The middle one is not a star, but a whole nebula, parts of which until recently were invisible to scientists.

The ALMA radio telescope complex in the Chilean Atacama Desert and the 30-meter IRAM telescope in Spain helped to gain a new look at the famous Orion Nebula. Observations have allowed researchers to identify a gas network organized into relatively thin entangled filaments.

According to the authors of the study, the detection of gas strands in Orion opens up new possibilities for describing the structure of internal gas in massive clouds.

Nebulae are huge gas areas that are considered starry nurseries, places where the gas joins new stars. The Orion Nebula is about 1,350 light-years away and looks like a star-sized spot visible to the naked eye. But if we could see the entire system, it would have seemed twice as large as the Moon.

Most of the system is not visible without special tools. ALMA, IRAM and other new telescopes can distinguish between the wavelengths of only the right side of the spectrum.

Scientists first noticed these threads around another nebula as early as 2013 and have since found them in other stellar clouds. According to the study, new observations made it possible to identify 55 strands in Orion.

Researchers are not entirely sure why such a dense gas is arranged in this way – it is possible that it assembles into strands under the influence of a local gravitational field. But, it seems, this is the prevailing structure of the organization in the nebulae. “Widespread fibers seem to reflect the preferred mechanism for organizing dense molecular gas in the clouds,” the scientists note.

The study of nebulae like Orion can help uncover the secrets of the birth of stars.