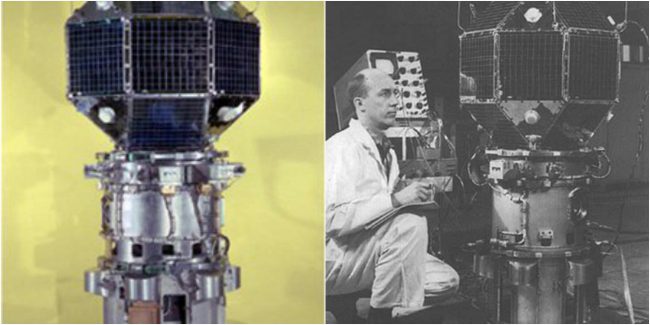 American satellite, which was considered failed and lost in 1967, again reached out and began to transmit messages to the Ground after 46 years of neglect. The unit itself is one of several satellites Lincoln Laboratory at mit between 1965 and 1976 years to test the new technology of satellite communications.

For easy labeling of each of the satellites were given the names LES1-LES9. The launch vehicle LES1-LES4 were considered partially unsuccessful. The same satellites Gemini LES1 and LES2 was planned to bring on an elliptical orbit 2800 x 15 000 kilometres, however, the problem is booster booster not allowed to bring LES1 the planned orbit – the satellite remains in a circular orbit at an altitude of 2,800 kilometers.

Satellites LES3-LES4 was planned to bring in a geostationary orbit, however, in connection with the running of the machines was able to achieve only a transitional orbit. Despite the fact that the first four satellites were withdrawn in an unplanned coordinates, they all coped with their changing tasks. The launch vehicle LES5, LES6, LES8 and LES9 in turn went normally, and the satellites were put on a pre-planned trajectory. As for LES7 of the satellite, its launch was cancelled due to lack of funding and eventually closure of the program.

In 2013 the British Amateur astronomer from North Cornwall caught a radio signal, which, as it turned out, was the signal of the satellite LES1 built by MIT in 1965. The machine and not released into the desired orbit, since launch, and revolved around the Earth, staying completely out of control.

Phil Williams, radio Amateur from the British town of Bude, have a signal that recurred every four seconds. To explain the intermittence of the signal was possible because the camera is constantly spinning and its solar panels from time to time turn away from the Sun into the shadow cast by its engines.

“Tension in the solar panels jumps, and it can do the phantom signal,” says Williams.

It is likely that the onboard battery of the satellite is completely destroyed, so the power for the signal transmission at the frequency 237 MHz may be something else. The unit itself is not larger than the size of a compact car and poses no more danger than any other kind of space debris in orbit.

The fact that the electronics of the apparatus, built about 50 years ago, 12 years before the launch of the probe “Voyager-1” and long before the creation of microprocessors and integrated electronic circuits, is still in working condition after spending decades in the harsh conditions of space, speaks volumes.

Identical in almost all respects LES1 and LES2 were planned to be used as an experimental communication satellites. They are both equipped with a transmitter of radio waves, X-band, 8-the ultimate electronic-adjustable antenna and was used for height control and experiments in sensing.

The main objective of this programme was to build, run and test the systems that could in the future be used for military space satellites.

Run LES1 from the launch pad of the spaceport at Cape Canaveral took place on 11 February 1965. Prior to orbit, he never made it. Launched later LES2 still got to the target coordinates, but much later than planned.