A mysterious explosion of a supermassive black hole has been recorded 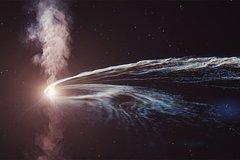 Scientists at the Harvard-Smithsonian Center for Astrophysics have recorded a mysterious flash from a black hole located at a distance of 665 million light-years from Earth. The discovery is reported in an article published in The Astrophysical Journal.

In October 2018, astronomers recorded the tidal disruption event AT2018hyz, which occurs when a star gets too close to a supermassive black hole and is torn apart to form a bright accretion disk. Observations that were carried out in various spectral ranges (radiowave, millimeter, optical, UV and X-ray) in the period of 970-1300 days after detection showed a rapid increase in radiation in the range of 0.8-240 gigahertz. In other words, scientists observed a second flash, although the black hole did not absorb any new star at that moment.

Scientists already knew that some tidal disruption events show a delayed radio peak. For example, ASASSN-15oi suddenly increased its radio brightness 1400 days after optical detection, with a peak that surpassed earlier outbursts. It has been suggested that this phenomenon is the result of several possible effects, including the deceleration of an off-axis relativistic jet launched during the destruction of a star, the interaction of ejecta with a dense interstellar medium, or a delay in the outflow of matter due to transients in the accretion disk.

AT2018hyz is about 30 times brighter than early peaks. This requires an energetic outflow of matter at 0.2-0.6 the speed of light approximately 750 days after optical detection. The minimum kinetic energy of the flow is estimated at 5.8-6.3 times 10 to the 49th power of erg. Such a flash could not have been produced by the material thrown off during the destruction of the star.

One of the possible explanations proposed by the authors of the work is that the plasma jet generated by the fall of matter into the black hole was weak or inactive in the early stages after the destruction, and then suddenly became active due to a change in the state of the accretion disk. An alternative scenario is that the initial magnetic field of the collapsed star was not strong enough to feed a powerful relativistic jet, but the magnetic field of the required strength was generated by the accretion disk. These and other possible delayed outburst mechanisms will be tested in future observations of AT2018hyz.