A mysterious signal came from the depths of the universe 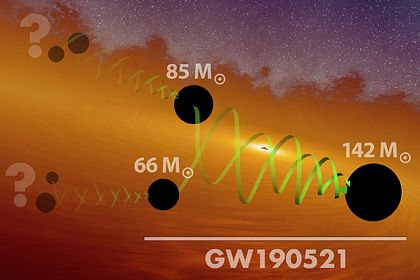 Astronomers have recorded a gravitational signal that came from the depths of the universe and was generated by the most massive merger of black holes ever observed. The result was also the first-ever discovery of a mysterious medium-mass black hole, a type of object whose existence has not yet been confirmed. The discovery is reported in a press release on Phys.org.

Signal GW190521 lasting less than one tenth of a second was detected on May 21, 2019 by employees of the laser interferometric gravitational-wave observatory LIGO. The accompanying distance to the source (taking into account the expansion of the universe since the signal was emitted) is estimated at 13 billion light years (four gigaparsecs). This roughly corresponds to the age of the universe when it was half its age.

According to calculations, GW190521 was most likely emitted at the time of the merger of black holes in the binary system. Their masses are 85 and 66 solar masses, respectively. After the merger, a black hole with a mass of 142 Suns was created and a huge amount of energy was released in the form of gravitational waves, equivalent to eight times the mass of the Sun.

All black holes observed to date fall into one of two categories: black holes formed during the death of stars, whose mass reaches from several to tens of times the mass of the Sun, and supermassive black holes, such as the one in the center of the Milky Way galaxy. However, the black hole created by the GW190521 event is in an intermediate mass range between these two types.

That merging black hole, which had a mass of 85 Suns, is definitely in this gap. The explanation may be that this black hole itself arose as a result of the merging of black holes of stellar mass.

However, scientists have caught another unusual feature of GW190521: a clear gravitational signal was identified using algorithms that carry out a general search for sources of gravitational waves. This leaves a small chance that the source of the signal could not have been a merger of black holes, but another event. Other causes of gravitational waves could include a large collapsing star in the Milky Way or a topological defect such as a cosmic string, although these versions are much less likely.