A new form of star formation has been discovered 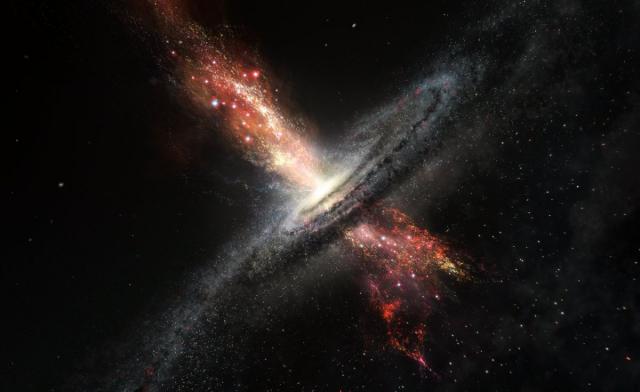 Observations on the Very Large Telescope ESO have shown that stars are formed inside powerful emissions of matter from supermassive black holes in the nuclei of galaxies. These are the first confirmed observations of the formation of stars under such extreme conditions. The discovery should significantly change our understanding of the properties and evolution of galaxies.

A team of European astronomers, led by UK experts, used the MUSE and X-shooter receivers on the Very Large Telescope (VLT) at the ESO Observatory on Mount Paranal in Chile to investigate two colliding galaxies.

The object of observations, denoted by the joint abbreviation IRAS F23128-5919, is 600 million light-years away from the Earth. Scientists have observed colossal eruptions of matter from the vicinity of a supermassive black hole in the core of the one of the two galaxies that lies to the south, and for the first time found a direct proof of the birth of stars inside this substance.

Eruptions are caused by the release of giant amounts of energy in active turbulent central regions of galaxies. In the nuclei of most galaxies, supermassive black holes are hidden; In the process of absorbing the surrounding matter they heat it up and throw out a part of it outward in the form of powerful and dense flows of gas “wind”.

“Astronomers have long assumed that the conditions inside such streams may be suitable for star formation, but no one has yet observed this in reality – this is an extremely complex observational problem,” comments the team leader Roberto Mayolino of Cambridge University. “Our observations are remarkable precisely because they unambiguously prove: inside the outflow of matter from black holes, stars really form.”

The goal of scientists was to directly study the stars and the surrounding gas inside the emissions. To this end, they used MUSE receivers and X-shooter: world-class spectroscopic instruments on the VLT telescope, which allowed them to perform an extremely detailed study of the radiation of these areas and determine its source.

As is known, the radiation of a young star causes the surrounding gas to glow in a special way. The exceptionally high sensitivity of the X-shooter receiver allowed the group to exclude other possible causes of such a glow, such as, for example, shock waves in a gas or the activity of a galactic nucleus.

The group carried out an indisputable direct registration of the newborn star population within the ejection. The age of these stars is estimated to be less than several tens of millions of years. Preliminary analysis shows that they are hotter and brighter than stars formed in less extreme environments, for example, in galactic disks.

In addition, astronomers investigated the motion of the detected stars. The radiation of most of them shows that they move with very high velocities in the direction from the center of the galaxy, which is natural for objects in a powerful stream of matter ejected from the core.

Co-author Ellen Russell of the Institute of Astronomy in Cambridge, UK, adds: “Stars that form in wind currents near the galactic center can slow down and even start moving toward the center, but the stars that form in the ejection experience less inhibition and even Can forever leave their galaxy. ”

The discovery promises interesting results for the development of some areas of astrophysics, for example, to solve questions about how galaxies acquire a certain form, how enrichment of intergalactic space with heavy elements occurs, and even where cosmic infrared background radiation can not yet be explained.