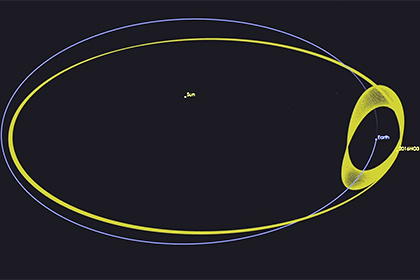 Astronomers have discovered a new natural quasistatic of the Earth. It represents the asteroid, dubbed 2016 HO3. It is reported by NASA.

The size and mass of the asteroid is not exactly known. Presumably, its diameter is 40-100 meters. The minimum distance between 2016 and HO3 Land 38 is equal to the distance between the planet and the Moon, the maximum is 100.

The asteroid will be kazipoteka of the Earth within the next few hundred years. First 2016 HO3 was recorded April 27, 2016 with automatic Hawaiian telescope Pan-STARRS 1.

Currently, the Earth is four kazipoteka (not counting the 2016 HO3). Four of the asteroid in the next 100 years can pass in this category. The asteroid 2003 YN107 was kazipoteka planet in 1996-2006. In addition to the Earth, such objects have with other planets in the Solar system, particularly Venus and Neptune.

Kazipoteka is called the object with the planet in orbital resonance 1:1 (the orbital period of the object and the planets around the Sun are the same). However, celestial bodies are different eccentricities (elongation of the orbit), which over time leads to divergence of objects in space.