A new recipe for the search for extraterrestrial life 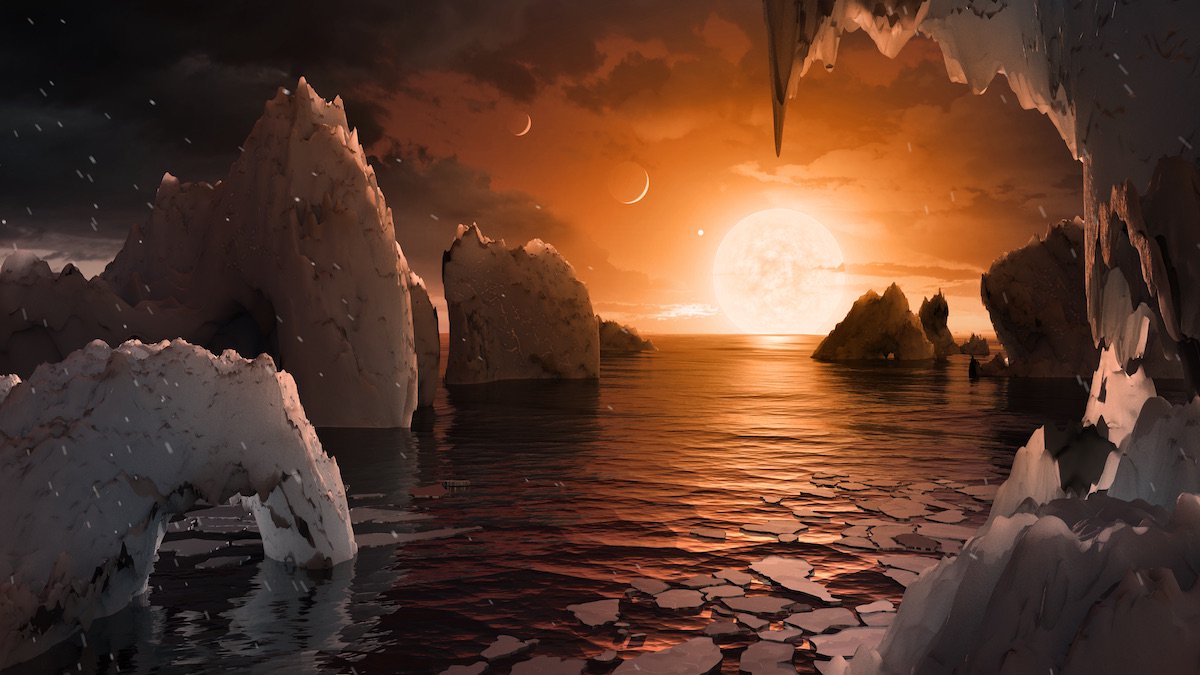 For most types of life in the universe, oxygen can be a deadly poison. But, strangely enough, it can greatly simplify the search for such a life for astrobiologists. Imagine that you get into a time machine that will not only be able to travel for billions of years, but also overcome light goals in outer space, and everything in order to find life in the universe. Where would you start the search? The recommendations of scientists can surprise you.

At first you will think that life can be similar to our familiar earthly life: grass, trees, frolicking animals at the watering place under the blue sky and the yellow sun. But this is the wrong course of thought. Astronomers conducting a census of the Milky Way planets tend to believe that most of life in the universe exists on worlds revolving around red dwarf stars that are smaller but more numerous than stars like our Sun. Partly because of this abundance, astronomers have to study them with all diligence. Take, for example, the red dwarf TRAPPIST-1, which is only 40 light years away from us. In 2017, astronomers discovered that around it revolve at least seven planets similar to the Earth. A lot of new observatories – led by star NASA, James Webb Space Telescope – will begin work in 2019 and will be able to get acquainted with the planets of the TRAPPIST-1 system, as well as many other planets in red dwarfs in search of life.

Meanwhile, no one knows for sure what you will find by visiting one of these strange worlds in your space-time machine, but if the planet looks like Earth, it is likely that you will find microbes rather than an attractive megafauna. The study, published January 24 in Science Advances, demonstrates that this curious fact can mean for the search for aliens. One of the authors of the work, David Katling, an atmospheric chemist from the University of Washington in Seattle, peers at the history of our planet to develop a new recipe for searching for unicellular life on distant worlds in the near future.

Now on Earth, most of life is microbial, and careful reading of the planet’s fossil and geochemical data shows that it has always been so. Organisms like animals and plants – as well as oxygen, which these plants produce in order for animals to breathe, are relatively new phenomena that have appeared over the past half a billion years. Prior to this, out of four billion years of the Earth’s history, our planet spent the first two billion years as a “muddy world” under the control of methane-fueled microbes, for which oxygen was not a life-giving gas, but a deadly poison. The development of photosynthetic cyanobacteria determined the fate of the next two billion years, and the “methanogenic” microbes were driven into dark places, where oxygen could not reach – underground caves, deep bogs and other gloomy territories in which they live until now. Cyanobacteria gradually greened our planet, slowly filled its atmosphere with oxygen and laid the foundation for the modern world. If you visited our planet in your time machine all these years, then nine times out of ten you would find only a unicellular alga life, and also risk suffocating in poor oxygen air.

This creates a challenge for scientists who hope to use the James Webb telescope (rather than the time machine) to find other worlds with life. Molecules in the atmosphere of the planet can absorb the transmitted light of stars, due to which light stains are formed, which astronomers can detect. The abundance of oxygen in the planet’s atmosphere is one of the most obvious pointers to a possible life, because creating it without biology is not very easy. According to astrobiologists, this highly reactive gas can be a “biosignature”, because in large concentrations it “out of balance” with the environment. Oxygen, as a rule, falls out of the air in the form of rust and other oxidations on metals, and does not hold in the gaseous state, so if there is a lot of it, something – perhaps photosynthetic life – must constantly replenish it. But if we take as an example our planet, astrobiologists admit that oxygen can be the last thing they find – genetics says that complex photosynthesis as a process of producing oxygen was invented by cyanobacteria as an unusual evolutionary innovation that was found only once throughout the long history of the earthly biosphere. Consequently, any hunter of life on other planets will see through the lens of the telescope, most likely an anoxic planet. What other biosignature can such a hunter look for?

Currently, the best way to find the answer is to return to our time machine. Only this time it will be a virtual computer model that plunges into the inaccessible depths of the anoxic past of the Earth (or the real alien world), exploring the possible chemistry of gases in the atmosphere and the ocean that could take place. Using data from old breeds and other models to select the best assumptions about the chemistry of the Earth’s environment three billion years ago, the computer can see obvious imbalances – possible biosignatures. Actually, this was done by Katling, working with Joshua Krissansen-Totton and Stephanie Olson of the University of California at Riverside.

Their “time machine” is a numerical approximation of the huge volume of air trapped in a large transparent box with an open ocean at the bottom of the box; The computer simply calculates how the gases contained in the box will react and mix with the passage of time. In the end, the interacting gases use all the “free energy” in the box and reach equilibrium – when the reaction requires additional energy from outside, as if the soda has run out. Comparing the cocktail of exhausted gases with a lively mixture locked in a box initially, scientists can accurately calculate how and when the atmosphere of the world has been in balance. This approach can reproduce the most obvious example of the atmospheric imbalance that exists in our planet – the presence of oxygen and traces of methane. Simple chemistry shows that these gases do not have to coexist for a long time, but on Earth they coexist, which makes it clear that something on our planet breathes and lives. But for an ancient Earth without oxygen, the model will demonstrate a completely different behavior.

“Our study gives an answer” to the question of how to find an anoxic life on an earth-type planet, says Katling. Most of life is simple – like microbes – and most of the planets have not yet reached the oxygen-rich stage. The combination of relatively common carbon dioxide and methane (in the absence of carbon monoxide) is a biosignature of such a world.

Crissansen-Totton explains in more detail: “The presence of methane and carbon dioxide at the same time is an unusual phenomenon, because carbon dioxide is the most oxidized state of carbon, and methane (consisting of a carbon atom bound to four hydrogen atoms) is the opposite. To produce these two extreme forms of oxidation in the atmosphere is simultaneously very difficult in the absence of life. ” A solid planet with an ocean and more than 0.1% of methane in the atmosphere should be considered as a potentially inhabited planet, scientists believe. And if atmospheric methane reaches a level of 1% or higher, then in this case the planet will not be “potentially”, but “most likely” inhabited.

Jim Casting, an atmospheric chemist at the University of Pennsylvania, says that these results are “on the right track,” despite the fact that “the idea that methane can be a biosignature in an anoxic atmosphere is relatively old.”

In addition, Katling and his co-authors have found out how their methane signature should behave and how to distinguish it from inanimate sources. According to their model, methane in the atmosphere of an anoxic planet of terrestrial type should usually react with carbon dioxide, which still hovers in the air, mix with nitrogen and water vapor, spilling rain in the form of a heavy mix. Further calculations showed that no abiotic (that is, inanimate) sources of methane on a solid planet can not produce enough gas to interfere with this process – whether volcanic gas contamination, chemical reactions in deep water vents and even asteroids fall. Only a living population of methane-eating bacteria can explain the gas. More importantly, even if the abiotic sources provide enough methane, they will almost inevitably produce a lot of carbon monoxide – a gas that is toxic to animals, but very much loved by many microbes. Together, methane and carbon dioxide, in the absence of carbon monoxide, on a solid planet with the ocean can very well be interpreted as a sign of life independent of oxygen.

This is good news for astronomers. The telescope of James Webb will hardly be able to directly determine the presence of oxygen on any potentially inhabited planet that he sees during his mission. As your eyes can see visible light, but do not see radio or X-rays, Webb’s vision is tuned to the infrared spectrum – part of the spectrum that is ideal for studying ancient stars and galaxies, but poorly copes with oxygen absorption lines where they are scattered and sparse . Some scientists express fears that the search for life will have to be postponed until the appearance of other, more capable telescopes. But although Webb can not easily see oxygen, its infrared eyes can perfectly see signs of an anoxic life. The telescope is capable of simultaneously detecting methane, carbon dioxide and carbon monoxide in the atmospheres of some planets near red dwarf stars. For example, in the TRAPPIST-1 system.

Still, Webb is unlikely to cope with the most important part of Cutling’s criteria – the determination of the relative amount of each gas – and will not be able to understand, for example, whether methane produces volcanoes or flickering microbes on a single planet. It is unlikely that Webb will find an anoxic biosphere on any planet under the red sun.

Another thing is important. Life is more important to look for than oxygen.