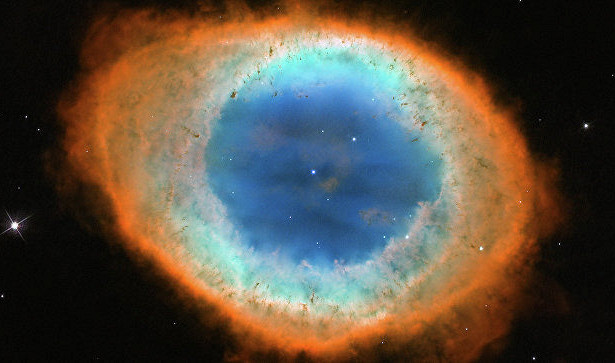 Scientists have discovered in the constellation Snake an unusual nebula HuBi 1, which resulted from the fact that one of his stars “turned inside out” in the last moments of life. Similarly, the Sun will also die, astronomers write in an article published in the journal Nature Astronomy.

“The progenitor of this nebula is one of the relatively rare objects, the so-called” degenerated “stars, which is the” lost link “in the evolution of white dwarfs located at the center of other planetary nebulae, and the life of the Sun can end,” write Martin Guerrero (Martin Guerrero) from the Astrophysical Institute of Andalusia in Granada (Spain) and his colleagues.

Some of the most notable objects in the night sky are the so-called planetary nebulae – huge clouds of red-hot gas that stretch for several light years. In the distant past, astronomers believed that they are distant star systems in which the formation of new planets began, and only in the middle of the 19th century did scientists learn that this is not so.

It turned out that they represent the remains of the dumped shells of small stars, similar to the Sun, almost exhausting their hydrogen reserves and turned into red giants. This gas is constantly “heated” by the ultraviolet radiation of a dying star or white dwarf, which arises in its place after the discharge of the last outer layers of the star.

Due to this radiation, a cloud of gas and dust begins to glow, which gives rise to a beautiful and bright nebula. Their shape and device depend on what is happening inside the interior of the luminary, and therefore scientists today actively study such nebulae in the hope of revealing the secrets of the death of stars.

Guerrero and his colleagues uncovered the extremely unusual circumstances of the death of a star resembling the Sun, studying one of such nebulae in the constellation Snake, the object HuBi 1, discovered in 1990 by astronomers from the Netherlands. Inside this nebula they found a dull glowing object, which they considered an ordinary white dwarf that arose after the death of the red giant.

Observing various planetary nebulae in the immediate vicinity of the Galaxy, the authors of the article noted that something strange is happening with HuBi 1. Its central star simply “disappeared,” covering itself with an incomprehensible layer of dust and gas, and the nebula itself began to cool in a strange way from the inside, and not from the outside, as it happens to the rest of the “shrouds” of the dead bodies.

The Future of the Sun

Trying to understand what happened to HuBi 1, astronomers studied the neighborhoods in detail and analyzed archival images that were received by various optical and infrared telescopes during observations of that part of the constellation Snake, where it is located.

As it turned out, the brightness of the star has been continuously falling for the last 50 years, having decreased by about 10 thousand times during this time, and its temperature has been unusually low for white dwarfs all this time. This suggests that in the center of the nebula is not the usual “dead star”, but a miniature analogue of the so-called Wolf-Rayet stars – especially hot and restless blue stars, throwing into the cosmos large amounts of matter in the form of a stellar wind.

The aged star turned into a similar object in the last moments of her life, when helium began to burn in her core, which led to its “degeneration” and temporary rejuvenation. This outburst of activity threw out the last remnants of the outer shells of the star and gave birth to a powerful shock wave that “turned inside out” its former bowels.

This is manifested in the fact that the outer layers of HuBi 1, discarded by its progenitor at the first stages of its transformation into a red giant, became the hottest and “brightest” part of the nebula, and its internal regions, on the contrary, cooled down and became opaque for the glow of the white dwarf a huge amount of dust that throws away the star.

A similar fate, scientists suppose, can expect the sun in the distant future, since it almost does not differ in mass and size from the ancestor of HuBi 1. It will be possible to verify this theory in the near future, when the so-called “Sakurai object”, another elderly the star located in the constellation of Sagittarius will enter the same phase of evolution as the star in the center of HuBi 1.