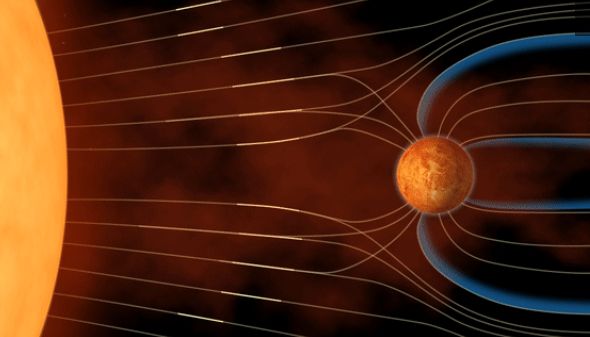 All earth-like planets in red dwarfs can be completely deprived of the atmosphere because of the unusually strong interaction of their magnetic fields, the solar wind and the magnetic field of the luminary, according to an article published in the Astrophysical Journal Letters.

“The magnetic field of the Earth plays the role of a kind of shield that protects the atmosphere of our planet and life on its surface from particles of the solar wind.If our planet was closer to the Sun and constantly bombarded with the same particle flux as the planets of TRAPPIST-1, then This shield would collapse very quickly, “said Cecilia Garraffo of Harvard University, USA.

Over the past year, scientists have found several planets at once, claiming the title if not the Earth’s double, then its “sisters” or “cousins.” The first planet was found near the nearest star, Proxima Centauri, and three others in the TRAPPIST-1 star system in the constellation of Aquarius, where seven earth-like planets were discovered.

All these planets are united by the fact that they are small in size, they are in the “zone of life” – in the orbit where water can exist in liquid form, and revolve around red dwarfs. The latter is both plus and minus, since red dwarfs live very long, which leaves a lot of time for the birth of life, but some of them have a very restless character in their youth and produce a lot of flares.

Garraffo and her colleagues, after analyzing how the magnetic shield of the planets will interact with the particles of the solar wind and the magnetic field of the star, opened another possible reason for the absence of life in TRAPPIST-1 and other red dwarfs.

Astronomers are interested in this for two reasons. TRAPPIST-1 and other small stars have very strong and restless magnetic fields, whose lines extend far beyond the luminaries themselves, and the planets in their vicinity are bombarded by a powerful stream of particles whose pressure on their magnetic shield is about 10,000 times higher than the solar Wind in the vicinity of the Earth.

Combinations of these factors, as shown by the calculations of Garraffo and her colleagues, are enough to very quickly break through the magnetic shield of all three potentially inhabited planets from TRAPPIST-1 and cause the lines of their magnetic fields to unite with lines emanating from the red dwarf.

As a result, the solar wind particles emitted by TRAPPIST-1 will unhamperedly bombard the atmosphere of the planets and carry its molecules into outer space. Coupled with a high level of ultraviolet light, this reduces the likelihood of life on the “seven sisters” of TRAPPIST-1 to one percent or even less.