A planet is found, hotter than many stars 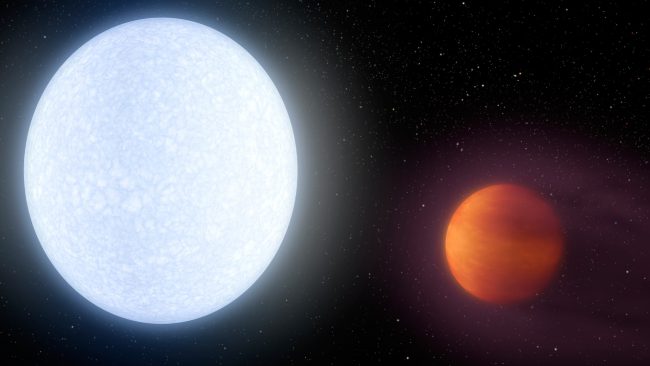 Astronomers have discovered one of the most unusual exoplanets at the moment. It is a gas giant similar to our Jupiter, but it is so close to its light that it makes a complete revolution around it in just 1.5 days. Because of this, the surface temperature of this planet is higher than most of the known stars.

The reason why the gas giant discovered is a real hell, is that the star itself is very hot. Its temperature is about 10 170 degrees Kelvin.

“It will be fair to note that this planet is hotter than at least 80 percent of the known stars. That in itself is simply amazing, “- commented astronomer Johnny Horner of the University of Southern Queensland (Australia), who did not take part in this discovery.

“At this temperature, the planet’s surface is more like the surface of its native star. In this case, the temperature and brightness of the star itself is much higher than that of our Sun. In general, this makes the planet the hottest one we have ever discovered. Its temperature is more than 1000 Kelvin above the rate of the hottest planet discovered before. ”

The scientists were able to find out some interesting details about this exoplanet. For example, despite the fact that KELT-9b is about 2.8 times heavier than Jupiter, it has half the density compared to our gas giant. This is explained by the fact that the atmosphere of the planet is constantly blown away due to the powerful activity of the native star.

“According to all definitions, based on the mass of the object under consideration – this is exactly a planet. But its atmosphere is unlike any other, which was found in any other planets. At least part of the colossal temperature difference on its day side, “says one of the discoverers of KELT-9, astronomer Scott Gaudi from the University of Ohio (USA).

In fact, scientists are very surprised by the fact that the planet is generally able to withstand such intense heat exposure.

“I am sincerely surprised that this planet exists. When you have such a very massive and bright star, the power of its radiation is so great that it can actually blow out the entire matter that makes up the planet. But to create such planets in that area of ​​space, there is not much gas and dust left, “says Alan Duffy, an astronomer at Swinburne University of Technology, who did not take part in the study.

Such extreme conditions, in which the planet must be located, are unlikely to allow it to exist for long, say scientists. According to calculations, the planet KELT-9b can lose about 10,000 tons of its mass daily, which probably creates behind its huge tail, which we usually used to see in comets.

Probably, not much time will pass before the outer layers of the planet are completely blown out under the influence of the star, exposing a solid core (although not a fact that is solid, since scientists still do not know what cores planets like KELT-9b have. ).

As noted by Horner, the study of the planet was conducted in co-authorship with an international team of researchers and amateur astronomers, so scientists managed to conduct really complex observations.

“We were actually able to push the boundaries of technological opportunities. The results of this work are really impressive, “Horner said in a conversation with ScienceAlert.

Usually scientists try to search for exoplanets around small, more dim stars like our Sun, as they are easier to see and test for the possibility of having planetary objects next to them. However, the observation of such a hot planet, like KELT-9b, allows us to expand our understanding of what might be hidden in more complex systems.

“The results of the work show that such super-hot and super-bright stars can also have planets. Moreover, as it turned out, such interesting, “- says Duffy.

Now that scientists have discovered the existence of this amazing world, they would like to explore KELT-9b in more detail with the help of other telescopes. And in this case, in their opinion, the new space telescope James Webb, which NASA’s aerospace agency plans to launch next year, can help.