A planet is found that contradicts the laws of planetary formation

According to a new study, one giant and distant world, once described as “a planet that should not be where it is” seems to have really formed not where one would expect, and not from that cosmic material that should have been In this participate and thanks to which almost all the known planets are born.

The anomalous object, called HD 106906b, is a very young planet located about 300 light years from Earth in the constellation Southern Cross. The planet was first discovered in 2013. It is unique in what distance from its star it is – about 650 astronomical units, or 650 times farther than the distance from the Earth to the Sun. This unique feature of the HD 106906b gives it the title of a planet having the outermost orbit around a single sun-like star. For a complete revolution around its luminous planet, it takes about 1500 years.

However, the most interesting feature of the HD 106906b is not even related to its giant orbit, but to the fact that the planet is far beyond the outer limits of the cosmic planetary material (gas and dust, that is, the matter from which the planets form) gathered around the star HD 106906. In In our case, the protoplanetary disk is about 10 times closer to the star than the planet HD 106906b itself, which, in turn, causes astronomers to think about how it could have been formed in this case. 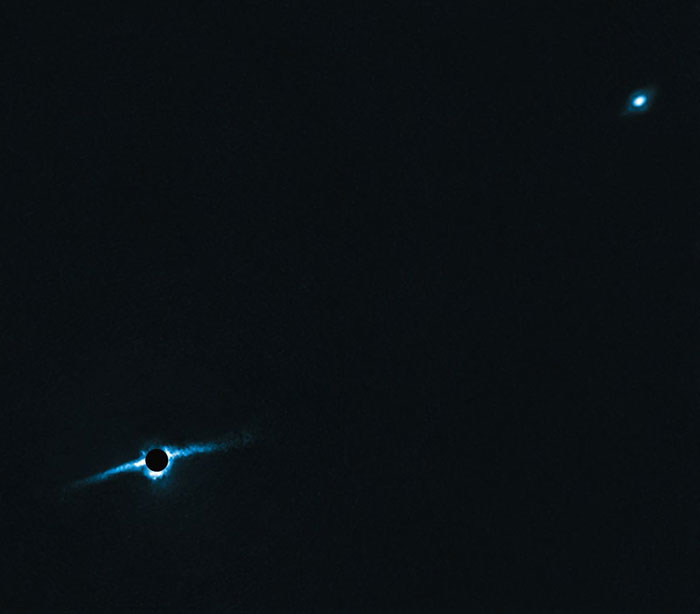 “Our current theories of planetary formation do not take into account the possibility of the planet being located beyond the outer limits of the planetary disk,” explains astrophysicist Smadar Naoz of the University of California, Los Angeles.

Naoz and her team are now developing a computer model that could track the orbital path of the planet HD 106906b.

Since the first discovery of the planet, scientists are trying to explain how it was so far removed from its star HD 106906, since the vast majority of exoplanets, as a rule, are located inside the planetary disk. For example, in our Solar System, all planets are within the boundaries of the Kuiper Belt, which is beyond the orbit of Neptune and consists of dwarf planets, other small cosmic objects, as well as matter remaining after the formation of the planets.

Previous studies of the planet HD 106906b indicated that it could have formed inside a protoplanetary disk before the forces of gravity pushed it out of the system, but according to Naoz and her team, the scenario was different.

According to the computer model developed at the Carnegie Institution’s “super-particle collision algorithm in the Kuiper belt and planetary disks” (SMACK), the planet most likely really formed beyond the outer limits of its protoplanetary disk. The computer model, in which the known data about the system HD 106906 data, showed that the appearance of the planet HD 106906b inside the boundaries of the protoplanetary disk, it would affect the entire structure of this disk.

It remains unknown to scientists whether HD 106906 contains other planets, but the computer model showed that the elliptical shape of the protoplanetary disk of the system only indicates a connection with the planet HD 106906b.

“With the help of computer modeling, we were able to recreate the well-known form of the HD 106906 system disk without adding other planets. However, according to earlier assumptions, the system must contain other planets, so that the disk acquired this form, “says researcher Erika Nesvold from the Carnegie Institution.

As already mentioned above, the model also shows that the planet HD 106906b, most likely, was formed outside the disk. If the planet were initially formed within the boundaries of the disk, then after its gravitational dump, it would pull a part of the disk behind it and the latter would have a different shape.

At the moment, scientists still can not tell exactly how exactly from the gas and dust systems, from which, as a rule, most other planets in other systems are formed, the planet HD 106906b appeared, and yet scientists managed to slightly but narrow down The history of its origin. If in the future we can find similar planets on HD 106906b, the SMACK computer model will be able to tell more about how such planets can be formed.

“Other protoplanetary disks, too, most likely have their forms according to those gravitational influences that turned out to be giant planets belonging to these systems,” says Nesvold. “My computer model can help in the reconstruction and visualization of those features that led to some form of protoplanetary discs. In the future, this will help us better understand the evolution of planetary systems. “