A planet-killing asteroid hid in the sunlight 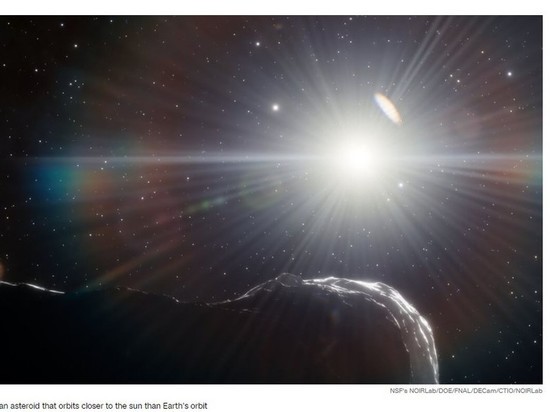 Astronomers have discovered three near-Earth asteroids that have been lurking undetected in bright sunlight. One of the asteroids is the largest potentially dangerous object that poses a threat to the Earth.

Asteroids belong to the group found in the orbits of Earth and Venus, but they are incredibly difficult to observe because the brightness of the sun protects them from telescope observations.

To avoid bright sunlight, astronomers jumped at the opportunity to make their observations during the short window of twilight. The international team observed space rocks using the dark energy camera located on the 4-meter Victor M. Blanco Telescope located at the Cerro Tololo Inter-American Observatory in Chile.

Their findings were published in The Astronomical Journal.

One of the asteroids, named 2022 AP7, is 1.5 km wide and has an orbit that could bring it closer to Earth in the future, but it’s hard for scientists to say exactly when.

“Our twilight survey examines the region within the orbits of Earth and Venus for the presence of asteroids,” said study lead author Scott S. Sheppard, an astronomer at the Earth and Planetary Laboratory at the Carnegie Institution of Science in Washington, DC.

Scientists have determined that the asteroid crosses the Earth’s orbit, but this happens when the Earth is on the opposite side of the Sun – this pattern will persist for centuries, since it takes an asteroid five years to complete a revolution around the Sun. But over time, the asteroid’s orbital motion will be more synchronized with the motion of the Earth. Scientists don’t know the asteroid’s orbit with enough precision to tell how dangerous it could become in the future, but for now, it “will stay away from Earth,” Sheppard said.

A near-Earth asteroid 1 kilometer or larger “would have a devastating effect on life as we know it,” he said. Dust and pollutants will fill the atmosphere for years, cooling the planet and preventing sunlight from reaching the Earth’s surface.

“It will be a mass extinction event the likes of which have not been seen on Earth for millions of years,” Sheppard said.

The team expects to find more planet-killing asteroids during their exploration over the next few years. Scientists believe that there are about 1,000 near-Earth objects larger than 1 kilometer, and studies over the past decade have found about 95% of them.